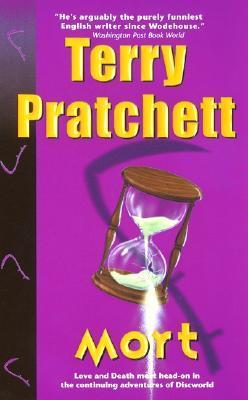 Death comes to Mort with an offer he can't refuse especially since being, well, dead isn't compulsory. As Death's apprentice, he'll have free board and lodging, use of the company horse, and he won't need time off for family funerals. The position is everything Mort thought he'd ever wanted, until he discovers that this perfect job can be a killer on his love life.

Also by this author: I Shall Wear Midnight, The Light Fantastic, Sourcery, The Shepherd's Crown, Guards! Guards!, Moving Pictures, Small Gods, A Blink of the Screen, Reaper Man

Fourth in the overall Discworld series and first in the DEATH subseries revolving around Death himself.

I can’t decide if Pratchett’s primary purpose is poking fun at Death and the different ways we expect it to occur or if he’s poking at people’s expectations, how they see what they want or expect to see. Or both…

The start is too funny as a frustrated father tries to figure out the best possible future for his inept son. It’s that section about Mort’s vagueness, his cheerfulness that his father complains of. A sweet and parental confusion that turns eager as Lezek brainstorms with his brother. The relief as they conspire to shift the problem onto someone else. The guilt as they justify the idea. Yep, it’s a parody of parents frustrated with their own children. Reading Mort would probably be a great release for parents suffering through their own offspring’s antics, LMAO.

Mort’s reactions will make you chuckle as he chases off thieves in Ankh-Morpork. His confusion about the “proper way to talk” when he’s on the job was another crack-up. That bit when Mort asks for the afternoon off, and Death’s response that pokes at one of the favorite excuses used by humanity: my grandmother’s funeral, lol. I can’t remember, but I’m wondering “if the check is in the mail” hmmm…

Poor Mort. Death has plans and hopes in mind for Ysabell. Plans that throw Mort for a loop as he considers those confrontational interactions with Ysabell — he did employ his own unconscious defense in that stable scene. I particularly enjoyed Mort’s inner thinking about how many more barrowfulls it’ll take to finish the job.

“Then there was the puzzle of why the sun came out during the day, instead of at night when the light would come in useful.”

I do have to wonder if Death sent Mort to the princess to give him the chance to save her. He can’t have been that stupid about what Mort would do. Perhaps Death took that precognitive statement into account at the end…?

“And official thieves were rare in the Ramtops, where people weren’t rich enough to afford them.”

I like the idea of biographies that write themselves. I suspect Death’s bios would need quite a bit of editing, though. I really don’t want to read every detail. The nail. Oh, man, she locked up her house and then hung the key on a nail by the door. Well, at least she wouldn’t lose it, lol. I do hope Goodie Hamstring’s ability to change is true. I know my neighbors and I see ourselves exactly the same way *she said with a prim sniff*

“‘It’s written in Old,’ he said. ‘Before they invented spelling.'”

I think I know why our parents didn’t want us reading “inappropriate” books. Gives one all sorts of odd ideas as Ysabell, in her expert role, expounds.

Nor is Mort the only core character having problems. Poor Death. He’s trying to find a job and getting quite depressed about his job skills. A poke at our economy, perhaps? Albert’s in trouble…I’d say it’s too much time in Death’s realm where he had too much, perhaps, autonomy? As much fun as it would be to “watch” the wizards getting healthy and returning to the original Unseen U concepts, I’m afraid he signed his own death warrant with those demands. Especially the one about the circus!

Hee-hee, no one is invulnerable to Pratchett’s wit as I laughed at the play on words of Ankh-Morpork being represented by a carbuncle on a world model in Death’s study. Then there’s the Empire as the Grand Vizier and the emperor trade oily compliments…the way it must have looked when Albert strode out of the rising cloud of marble dust…the Pyramids of Tsort with that opportunity to poke fun at Egyptian funereal rites while the priest at Sto Lat seems to be beyond his sell-by date. The fun Pratchett has at the bar with all those bits of leftover fruit salad and paper umbrellas followed by that on-the-job injury suffered by all who serve up beer and mixed drinks — bartender’s ear — will make you wish for Death’s constitution, but not his, um, frame.

It’s an exploration of death: postponing it versus exploring it.

He’s bored. There must be more to life than death. Maybe if he takes on an apprentice, he’ll have the time to discover what people do in life. What they enjoy and why.

Mind you, I think Death is having a mid-life crisis…

Mort, a.k.a., Mortimer or Boy, is the youngest son and an embarrassment. Lezek is his father. Hamesh is his uncle. His family distills wine from reannual grapes.

Death is the Grim Reaper, Father Time, the being who collects those who have died. Ysabell is his adopted daughter. Albert is the chief cook and bottle washer, and in truth, he’s a wizard who ran away. Binky is Death’s horse. No, he’s not one of those skeletal types…Death hates having to wire bits back on all the time. The Stack is where Death keeps biographies more than 500 years old.

The city of Sto Lat is…
…ruled over by King Olerve the Bastard, the collection job that truly begins the story, or rather his daughter’s imminent demise. Princess Keli is his daughter, expected to be Her Supreme Majesty, Queen Kelirehenna I.

“ROYALTY ARE ALWAYS A PROBLEM. THEY TEND TO WANT TO HANG ON. YOUR AVERAGE PEASANT, NOW HE CAN’T WAIT.”

Duke Sto Helit is a nasty enemy fated to unite kingdoms. Igneous Cutwell is a DM (Unseen), Marster of the Infinit, Illuminartus, Wyzard to Princes, and Gardian of the Sacred Portalls and now the Royal Recognizer. And totally without any concept of how to spell. Mrs. Nugent is his housekeeper and neighbor. She’s less competent than he is!

Ankh-Morpork is…
…the biggest, smelliest, most food-friendly city in the Discworld.

“You couldn’t help noting with every breath that thousands of other people were very close to you and nearly all of them had armpits.”

Alberto Malich founded Unseen University 2,000 years ago. Rincewind, the current assistant librarian, makes an appearance. The head librarian was turned into an orangutang, quite convenient, really.

Terpsic Mims is a fisherman whose primary interest is in escaping Mrs. Terpsic Mims, Gwladys to them that knows her. Lord Rodley of Quirm, the heir to the Quirm estates, must explain dancing and fun. Cripple Wa‘s floating crap game and Hummok M’guk‘s “skill” explore the laws of Chance. The Mended Drum is doing a roaring business as Death explores drunk. Liona Keeble is a job broker. It’s Harga’s House of Ribs that bring fulfillment.

Goodie Hamstring is a witch, and we all know that they know the time of their death. The Abbot of the Listeners, one of the oldest of the Disc’s religious sects, is getting tired of the old out-and-in routine. Nine Turning Mirrors is the Grand Vizier in the Empire which is ruled by a clever boy Sun Emperor. The Pyramids of Tsort provides an opportunity to poke more fun.

The Discworld is its own planet, a flat-bottomed convex disc riding “on the back of four giant elephants who stand on the shell of the enormous star turtle Great A’Tuin“. Reannuals are plants that grow backwards in time. Cori Celesti is the home of the gods. The Rite of AshkEnte summons and binds Death.

The cover is a bright fuchsia with a narrow, black, vertical band on the left side with grayed-out fuchsia scythes falling inside it. The main image is a shadow of a scythe over which an hourglass is imposed, sand (and time) spilling from it, as life runs out. The author’s name and title are in a deep yellow.

The title is the focus of this story as well as a pun on the core character, for Mort is both Mortimer and the Latin for Death.

One response to “Book Review: Mort by Sir Terry Pratchett”