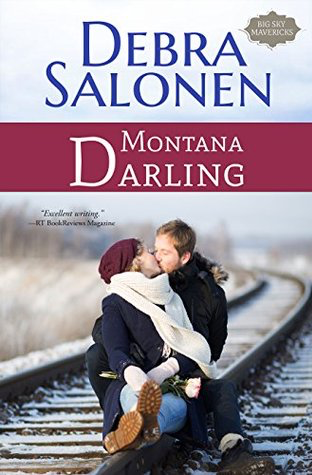 
Third in the Big Sky Mavericks contemporary romance series revolving around the Zabrinski family in Marietta, Montana (the series name is Austen’s childhood invention of a make-believe squadron of Navy jet fighter pilots). The couple focus is on Mia Zabrinski and Ryker Bensen.

This was a cute romance with quite the different approach from most romance novels I’ve read. And which Salonen sparked up with Mia’s and Ryker’s backgrounds. I particularly loved the backstory she provided on how Ryker got interested in photography. She was pretty sneaky as well with Ryker’s parents’, um, arrangements.

That stepfather was some lyin’ piece of work. I think Salonen let him off way too easy. Wa-a-a-a-y too easy. As for their mother. Yeah, she’s pretty scummy too.

Mia was somewhat annoying with her dithering about. She’s pretty pushy in some ways, and then a weasel in others. I do like that she is appreciating the reality of Ryker. His happiness in simple things. And it’s so sweet what he does towards the end in making Mia feel better about herself and what she’s gone through.

Sure, the storyline was familiar with a woman dumped and a man grieving. Their family backgrounds are different from each other’s as well…mmmm…maybe…sorta… Mia’s family was simply great while Ryker’s was half and half before it fell into the dismal depths. Both protagonists have suffered tremendous losses, and each has a different way of dealing with them, of which we learn through Salonen’s use of third person subjective global point-of-view with most of the story seen from Ryker’s and Mia’s perspectives.

On the negative side, Salonen needs a better proofreader.

Mia’s parents have convinced her to come home and housesit. And that’s how she discovers that squatter on her land!

It’s too much. Mia has lost enough, and she’ll be damned if she loses her land as well! And it could well be the spark that will force Ryker to start living again.

Mia “Meeps” Zabrinski, call sign “Nitro”, is a prosecutor who is recovering from cancer and a divorce. She has custody of their two kids: fourteen-year-old Emilee who is furious and eleven-year-old Hunter who retreats into gaming. Roxy is their Labradoodle. Edward Kingston, her twin’s best friend, is her jerk of an ex-husband. Bree is Ed’s new wife.

Austen Zabrinksi, a political consultant based in Helena, is her twin brother (call sign “Striker”), the sports hero, who is dating Serena James (Montana Cowboy, 2). Serena has an alpaca farm and does a fiber arts program, Twisted. Beau is her dog. Bartholomew is her herd sire. Dr. Mary Margaret “Meg” Zabrinksi, call sign “Lone Wolf”, is mad keen on wolves and lives in an isolated cabin, writing her books. Paul Zabrinski is her younger brother getting married in October to Bailey Jenkins (Cowgirl Come Home, 1). He owns Big Z Hardware and Lumber and has a crew doing handyman jobs. Chloe and Mark are Paul’s kids and Emilee and Hunter’s cousins. Sarah Joan Sharpe (she has Ashkenazi in her background) and Bob Zabrinski are their loving parents. Great-grandma Hilda’s pearls have a future.

The French-speaking Ryker Bensen is a Pulitzer-prize-winning photographer who has given it all up. Colette had been his fiancée; Dominique had been her cat. Martin Bensen had been an amazing father. Flynn Bensen, his brother, is a firefighter with the National Park Service who has split with his wife. Howard Margolis is their skeezy stepfather who is a real-estate developer and broker. His four kids, Peter, Penny, Charlotte, and Ben, were prime in the household. Elizabeth Bensen Margolis is their unloving mother with a secret past who is the trust administrator. Supposedly. Dave Cornelius had been their father’s best friend.

Louise Jenkins is the town librarian; Oscar “OC” is her husband, a fish whisperer who owns Jenkins’ Fish and Game. Their daughter, Bailey, owns Bedazzled Bling. Tonya is one of her artisans. Ren Fletcher is the town lawyer; Tully is his newly pregnant newlywed wife. Jamie and Tegan MacCreadie own the Blue Rock Mountain Ranch. Heath McGregor is in construction. Rachel owns Copper Mountain Gingerbread Factory. Sage Carrigan owns the Copper Mountain Chocolate Factory. Bob Raines does the school photographs for the yearbook. Sheri Fast is a forensic accountant. Troy Sheenan owns the Graff where Bailey and Paul get married. Cynthia and her two kids, Matt and Ken, are wedding guests. Haley, Cara, and Jenni are Emi’s school friends. Jarrod may have been Emilee’s first boyfriend in Marietta.

Big Al’s Transport and Storage is where Ryker is storing everything from his childhood and his life in France. Reba is Emilee’s best friend in Cheyenne.

The cover feels cold with that bluish white sky above the violet band. Below it are pale grasses to the left of that cold-looking railroad track where Mia and Ryker are kissing, all bundled up in their cold weather gear. The author’s name is large at the top in a deep blue while the title is fitted within itself in a red violet band spanning the cover from side to side just above the center. The series information is in white within a white-outlined greige elaborately curved badge in the upper right corner.

The title is where Ryker discovers his Montana Darling.