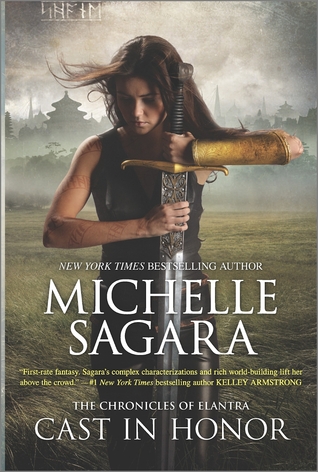 Buy on Amazon
Goodreads
Also by this author: Cast in Sorrow, Cast in Flame, Cast in Flight, Cast in Wisdom, Cast in Deception, Cast in Oblivion, The Emperor's Wolves

Eleventh in the Chronicles of Elantra fantasy series and revolving around Kaylin, the Chosen with no clue but with a heart of gold.

I did find myself wishing I had gone back and re-read Cast in Flame, 10, before continuing with Cast in Honor. It took awhile before I got caught up in what had gone before.

Remember, too, that myths are stories.

Each previous story has been one of Kaylin’s exposure to the different races within Elantra, and all that trust that Kaylin has been building throughout the series comes to aid her and her friends.

On the whole I absolutely adore Sagara’s Chronicles of Elantra, incorporating a magic that is both familiar and completely new, enough that I’m slowly buying them up. She does frustrate me though with the philosophical conflicts that she throws in. I keep wading through them, hoping that one day it’ll make sense. It sits in the back of my mind, wanting to come together, and I think I have the gist of it, but I’d never be able to explain it. Combine this with the whole time travel thing and…I’m still shaking my head, trying to clear out the confusion. It has to have been a bugger to write, having to track how it all worked.

What I love is her cast of characters; the world she’s created in all its complexities, species, cultures, and conflicts; and, the interactions they all have with the Dragon Court, especially Kaylin due to her relationship with Bellusdeo, and the arrogance of dealing with the Barrani. And it all revolves around Kaylin, an orphan girl from “the wrong side of the tracks”. I do adore Kaylin’s honesty and brashness and her desire to do the right thing mingled with her past.

“I wanted to be part of something bigger than me, in the end. I like the sense that we’re working on something together. That if justice and the law isn’t perfect, it’s better than the alternative. …if the law can sometimes be used to protect those who don’t have that power, it’s better than nothing.”

An encounter between Kaylin and the Emperor made me laugh. Who knew he’d be taking dating advice from a chit of a girl. Turns out he also has a dry sense of humor. Kaylin’s interactions with Moran are a bitter type of sweet with Kaylin so anxious to pay back the aid given her while Moran is both suspicious and worried about the repercussions that could fall on Kaylin.

I so enjoy the asides that give these characters depth with Kaylin well known for her betting, the betting that does go on around the Hawks (especially when it involves Kaylin, lol), the challenge of balancing Bellusdeo’s insistence on experiencing life versus the Emperor’s insistence on her continuing life, Kaylin’s inability to be diplomatic, and the list goes on. Moran’s situation allows Sagara to bring out the politics of the Aerians — a great way to avoid an info dump while providing background information.

Gilbert’s existence is one long question as Sagara strings us along, dropping hints that you don’t want to believe.

“The past, of course, is a different country; it is occupied, frequently, by regret, and it is ruled by tyrants. They cannot be moved.”

There’s an emphasis on stereotyping, on not judging people based on what others have done, and it certainly opens up Kaylin’s eyes.

It’s a terrifying story that provides you with very little to work with, and Sagara makes you work for that, as she explains time. It’s also a look at loneliness and how it can affect anyone at all.

In the end, “the way you view and interact with the important parts of your world” can be affected by your doing something you despise. … “If you have no self-respect, your ability to respect anything or anyone else is in peril.”

It’s fraught as both Mandoran and Annarion struggle to contain themselves, but Annarion especially labors, for his being out in the world attracts the Shadows. An attraction that led to a “vicious battle between darkness and light from which Elantra emerged victorious but at great cost”. And still the “Shadows continue to haunt every corner of its streets.”

Now the outcast Barrani Lord Nightshade is missing from his castle in the fiefs.

It’s the strange nature of a triple murder that embroils Kaylin “in a case that is anything but routine. Evidence of the deadly Shadows that “points directly to Ravellon — the heart of the Shadows and the darkness they contain”.

Private Lord Kaylin Neya, a Hawk, has a new home — not in the Imperial Palace — with Helen, a sentient building, a gardia, much like Tara. Kaylin is the Chosen and no one has any real idea what it means. Hope is her familiar, the little dragon, who first appeared in Cast in Peril, 8.

Corporal Lord Severn Handred grew up with Kaylin in the fiefs until the incident. He went into the Wolves and was then seconded to the Hawks to partner up with Kaylin; he provides the diplomatic side of their partnership.

The Hawks are…
…part of the Halls of Law and the policemen who investigate crimes in Elantra. Their commander is the Hawklord, Lord Grammayre. Hanson is his attaché. Corporals Teela Korrin (one of Kaylin’s best friends) and Tain Danelle are partners and Barrani who grew bored and joined the Hawks. Clint (Aerian) and Tanner (human) are frequently on door duty. And more friends of Kaylin’s. Sergeant Moran dar Carafel, an Aerian, runs the infirmary. First Corporal Kirby had to take over the infirmary after Moran was almost killed, and he was quite happy to utilize Kaylin’s healing abilities. Caitlin is the office mother, er, I mean, manager. Other Hawks include Master Corporal Gavin Karannis who prit’ near hates Kaylin and is a stickler for details, Private Lianne is his partner, Joey, and Mellian. Red is their medical examiner. Draalzyn, a Tha’lani, works Missing Persons. Perenne works in the office.

Sergeant Marcus “Ironjaw” Kassan, a Leontine lion shifter, is in charge of the day-to-day of the Hawks. Kayala is his first wife; he and all his wives see Kaylin as one of their kitlings.

The other two parts of the Halls of Law are the Swords, the riot police, the national guard for Elantra, who are ruled by the Swordlord and the Wolves who function as black ops and are ruled by the Wolflord. Jared manages the offices for the Swords.

The fiefs were…
…created to protect the city from the Shadows. They are seven mini-kingdoms, neighborhood havens for criminal elements, the disenfranchised, the poor, who are ruled by fieflords and outside the law. One of the fiefs is ruled by the outcaste — and lost — Lord Nightshade, his True Name is Calarnenne, who rules from Castle Nightshade. Lord Andellen is part of its guard. Tara is the Avatar of Tiamaris‘ Tower in that Dragon’s fief. Both are friends of Kaylin’s.

The Barrani are…
…arrogant immortal beings who plot and backstab like we eat breakfast. Mandoran of Casarre and Annarion of Solanace (he’s Nightshade’s longlost brother and both were freed in Cast in Sorrow, 9) are in Kaylin’s parole and living with her, with Helen to keep an eye on them, as they struggle to acclimate to all they’ve missed, to today’s realities, for they are Barrani no longer, but something more. Kaylin calls upon the trust she has built with Lord Ynpharion who hates that Kaylin has his True Name; Lirienne, Lord of the West March; Hallionne Alsanis, one of the hearts of the green which act as way stations (Cast in Peril, 8); and, the High Lord, the castelord of the Barrani who owes Kaylin a huge debt.

No Barrani can rule or be called Lord unless they undergo the test of the High Halls.

The Dragons are…
…the immortal ones in charge. Lord Bellusdeo is the female Dragon Kaylin rescued in Cast in Ruin, 7, who lives with Kaylin and has permission to accompany Kaylin on her patrols. I should mention that Bellusdeo is the only female Dragon. Maggaron, a Norannir, one of the lost whom Kaylin saved in Cast in Chaos, is Bellusdeo’s bodyguard. Lord Diamart is a very condescending Dragon who must teach Kaylin etiquette. Lord Sanabalis is an ancient Dragon who has been teaching Kaylin how to use her magic. The Arkon, Lannagaros, is one of the oldest Dragons and their Archivist; the library and the archives are his hoard. Lord Emmerian is another Dragon.

The Keeper’s Garden is…
…in the Elani district, the heart of the Emperor’s hoard, where Evanton rules and maintains a balance between Air, Earth, Water, and Fire, keeping the world real. Grethan is his disabled Tha’alani apprentice (Cast in Secret, 3).

The Tha’alani are…
…a native race of telepaths used by the emperor to question suspects and victims. Ybelline is their castelord. Scoros is one of the council; I think Eladara is his wife.

Gilbert Rayelle is a Shadow born in Ravellon, the doomed fief in Cast in Ruin, 7,, who has taken a young girl, Kattea, into his protection. Her father, Corporal Krevel, was a Sword who fled with the people he was keeping safe across the Bridge into the fiefs as his world fell apart.

Hazielle who inspired Helen to become more a part of the world. The midwives and the Foundling Hall, overseen by Marrin, in Elantra, frequently call upon Kaylin for help, as she has healing powers. Arcanists of the Arcanum are mages who work independently of the Dragon Emperor and each other. Ferals are massive wolf-like shapes that come out of the Shadows and kill.

Elantra seems to be both city and state. The Winding Path is a neighborhood in Elantra where the murders took place. Mirrors are a type of Skype communication that uses a magical lattice underlying the city. The bracer is a magical gauntlet that protects Kaylin’s arm; Severn is its keeper. The Shadows we’ve encountered so far are evil, killing, destroying, corrupting. They were Barrani and are similar to the Ferals, but bigger and more lethal. Part of the Hallionnes’ purpose is to protect against these Shadows. The Towers were built to control them. The Caste Courts are like a court of appeal by the other races in Elantra who are not Dragons. The Norannir are a race of giants (see Cast in Chaos, 6). The Ancients created everything and everybody. The Aerians are birdmen with wings who can fly, but they are not shifters.

The cover is serene with its foggy background of an Imperial city skyline in its suggestion of Chinese rooflines. There is a grassy field before it with a tattooed Kaylin wearing her bracer and black leather pants, her beautiful broadsword held upright before her with the tip resting on the ground, as she stares thoughtfully at the ground before her, her long brown hair tugged by a breeze. The author’s name, title, and series information are all in varying sizes of white.

The title is about Gilbert, for he is Cast in Honor.