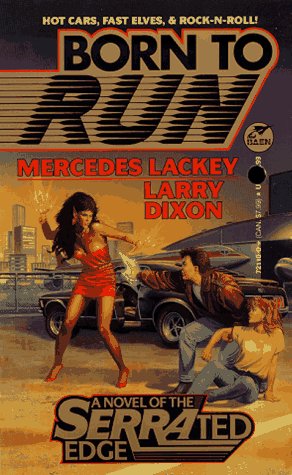 Book one of a new urban fantasy series centered on hot cars, fast elves, and rock-n-roll. Good elves are intrigued by stock car racing, and bad elves run kiddie-porn and drug rings. Trapped in between are three runaways who are in serious trouble and about to get into more--unwitting pawns in a deadly game between good and evil.

First in the SERRAted Edge urban fantasy series revolving around elves, magic, and racing cars. The focus is on Tannim.

It’s an enjoyable story — using the sportscar racing as the story’s setting is a unique twist — and must be some of Lackey’s early writing as it is rather juvenile and could use some work. That said, it is clever with a clever substitution, replacing the iron in cars with fiberglass and other nonferrous materials to make it easier for elves to be around all that Cold Iron. I love the ease of using an elvensteed to test out prototypes in a wind tunnel too!

I like how “Tannim” describes magic as a discipline: “a way of describing an inborn talent that’s been trained. It has rules, and it obeys the laws of physics. It uses the energy produced by all living things; it also uses the energy of magnetic fields, of sunlight, and a lot of other sources. It’s a tool, a way of manipulating energies;…”.

Things are only impossible because they haven’t been done yet.

A nice bit on how SERRA was formed. Lackey/Dixon almost make it believable that humans were using magic before the elves arrived on scene.

Tannim has a very different approach to teen hookers. Expensive, but a good way to begin to earn their trust. One he’ll use to help Tania who has run from a different, but still crippling kind of abuse. I’ll say it again, some people should not have children. The Catholic Church is so big on counseling before you get married; I wish they (and others) had a similar policy on counseling parents. Although, considering the Church’s reputation for what they do with children, maybe that’s a good thing.

Who knew elves would need money? I much prefer the Seleighe Court’s reasons and methods to that of their rivals.

It is funny how Aurilia is the smart one but also the lowest in status; watching her manipulate her partners is interesting. The evil triad is shocked to learn that Fairgrove’s elves are training humans to battle other elves, revealing their secrets, and I can see why it would be seen as a bad thing. Even if I can’t get behind their plans.

It’s a crunch of desires: the triad wants to take out Keighvin and doesn’t care who they hurt to destroy him. It’s only by luck, good planning, and good living that some of them escape. Although, there certainly were a number of incidents that could have been avoided if the Seleighe had been thinking. It’s that first battle that steps things up between them, for it brings Niall over to Aurilia’s way of thinking. Not so good for our side.

We sure get a tonnage of useless description. I’m not usually one to reject a “painting” of the setting, but I do like to have a purpose behind it. Especially when the authors are so keen to give information that makes you wonder what event they’re prepping you for. It’s such a letdown when nothing results. Now, when it comes to Tannim’s bed…that makes sense.

That Foxtrot Xray is too funny when he morphs from Oberon to an aircraft-carrier parking director!

Fairgrove Industries has done well in designing cars and creating innovative engines, but now they need a front man. Someone who can be convincing enough to outmaneuver Fairgrove’s enemies.

It’s Tannim’s job to convince the retired Sam Kelly to come out of retirement and put his reputation on the line.

For the Unseleighe are determined to take down the Seleighe and wreck their foray into human life. Even as they crank up their own entry into the human world with their snuff films and pornography.

Sam Kelly was a starving and abused little boy. As an adult, today, Dr. Sam (he has an electrical engineering degree) has retired from his job as a metallurgist at Gulfstream. His father, John, was brokenhearted over the death of his wife, Moira. It’s Keighvin who gives John a second chance to do right by his son. What happened to his great-uncle Patrick makes it easier for Sam to believe in the Fair Folk.

Fairgrove Industries
Keighvin Silverhair is Tannim’s boss and an elf who was raised by humans. Rosaleen Dhu is his elvensteed. Tannim reckons a fourth of the SERRA members are either elves or human mages. Donal is one of three elven mechanics who can be around a lot of Cold Iron. Conal is Donal’s twin with the scorched head and a fellow prankster. Rob, a.k.a., Skippy, van Alman is Donal’s human shadow. Dottie, Jim, Cuil, Kieru, and Janie are in that first battle as well. Tannim finds out that Padraig, Sean, and Siobhan‘s interest in polo comes in handy.

Ross Canfield is getting a second chance to make things right. Marty is the guy his wife married. The Old Man is a good mentor, and Foxtrot Xray is another good friend, though Ross knows Foxtrot is a part of the spirit world but not a ghost. Vanessa is another ghost, a child hooker before she died.

Derek Ray Kestrel is a friend of Tannim’s with a knack for magic and spends his time with cars and guitars.

Kevin Barry is a pub Tannim frequents. Terra Nova is a Celtic band that Trish, the pubowner, sings for sometimes. Julie is a waitress at the pub. Marianne is the barkeep.

Tania Jane Delaney is the underage hooker who catches Tannim’s eye. Jamie, an addicted lad who gets his money by hooking, and his girlfriend, Laura, another hooker, are Tania’s roommates and friends. Meg had been her only friend as a child. And only because they had the same time for tennis lessons. Joe, Tonio, and Honi are other roommates. Unwelcome ones.

Bane-Sidhe, a.k.a., banshee, get their energy from your fear and from your dying. Aurilia nic Morrigan is in partnership with Vidal Dhu and both are with the local Unselieighe Court; Niall, a Bane-Sidhe, is a third partner in Adder’s Fork Studios (they don’t bother keeping records; its actors are either volunteers or don’t survive the experience), a pornographic film studio.

George Beecher is a private investigator with Bruning, Inc. who finds out the truth behind the job too late. Terry is a cop who works in Vice; he is friends with George and with Tannim.

Sidhe, the Kindly Ones, the Lords of Underhill, the Old People, the Fairies, and the Fair Folk are all names for elves.

The cover is black and gold with a touch of red in Aurilia’s brief red dress as she prepares to lash out with her fire magic at a young couple. It’s a black racing car behind her with a city skyline behind that. The title combines font styles to look as though “run” is on the run with the wind whistling through it, making ripples in the letters. The whole title and the data on the series information both look like decals from a racing car: the title is black against a golden brown background while the series info is golden brown against a black background and both are outlined in red.

I think the title is about Tannim, as he is Born to Run with that Mustang of his!