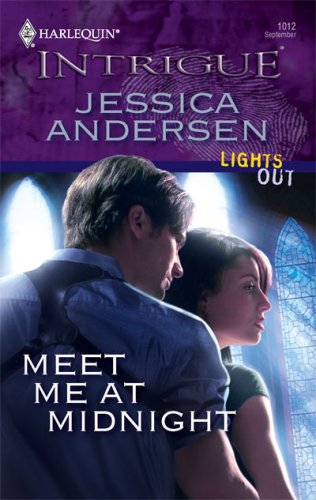 
Fourth in the Lights Out romantic suspense series (each of the four books has a different author) and revolves around a former teammate out for revenge in Boston. The couple focus in Meet Me at Midnight is on Gabrielle Solaro and Ty Jones.

This is good. Yes, it’s a Harlequin romance, and Andersen does a good job with the suspense as Ty is forced on a treasure hunt by a former friend-turned-maddened sociopath determined on vengeance. The romance is sweet, if somewhat unbelievable as Ty and Gabby grope their way around the darkened streets of Boston.

Somewhat believable (and yet not) is Ty’s insistence on Gabby guiding him. I mean, she is blind.

Andersen has created some great tension in this with lots of drama and action, and a most unlikely heroine. She does drive me bats with her indecision about “should I stay or should I go”, but I do appreciate why she feels so conflicted. I gotta say I do believe it, unfortunately, about the bad guy. Too, too typical of the type.

It takes Liam’s scavenger hunt to dislodge some of that hero worship Ty has for Davis, but it’s those final actions that cement in the truth.

She may be innocent or in it up to her neck…and she’s the only one who knows Boston. She may be blind, but she sees better than Ty in the Boston blackout. And she’s Secret Service Agent Ty Jones’ only lead to a madman who has plunged Boston into a blackout, ambushed his teammates and kidnapped the vice president…

…the woman who’d hacked into the kidnapper’s Web site. The woman he’d kept tabs on with a fake online romance. He was convinced she was the key — ’til he met her.

Gabriella “CyberGabby” Solaro enjoys testing her hacking skills on encrypted websites and teaches computer science at the Edmunds School, a school for the visually impaired. She’s also an inventor. Maria is her best friend and runs a restaurant, Zia Maria’s. Amy is Gabby’s sister. The Robinsons and Gino Vinzetti are her neighbors. Jeffrey is an ex-boyfriend. Fawn is a guide dog.

Special Agent Ty “TyJ” Jones, a demolition expert, is part of the team charged with protecting Vice-President Grant Davis. Stack is the president. Ben Parker, Ledbetter, and Wilder are more special agents; Epps is the special-agent-in-charge.. Mandy had been Ty’s wife. Ty’s father is Colonel Jones.

Eclipse is…
…an under-the-radar black ops group that includes Ty, Shane Peters as a security expert, Chase Vickers (Lily Garrett; A Baby Before Dawn, 2), and Ethan Matalon (Rebecca is his wife, and they have a son, Jesse; Anything For His Son, 3).

Other former Special Ops teammates for that hostage rescue 11 years ago included: Commander Tom Bradley who had a heart attack, Grant Davis had been the tactical expert, and Frederick LeBron (Princess Ariana is his wife; Royal Lockdown, 1). U.S. Secretary of State Geoffrey Rollins had been a hostage. Dana Whitley is a Pentagon staffer who had been their only link to the U.S. government.

Sergeant T. Martin, S. Sampson, Jimmy, and Paulo are with the National Guard.

The Wellbrook Halfway House is…
…run by the struggling Leonore “Lennie” and Tom Wellbrook. Kayleigh is one of the residents.

Liam Shea, a.k.a., Liam Sullivan and James Sullivan, was an electrical expert from a wealthy family; now he wants revenge for those ten years in a military prison. His sons are Finn, Aidan, and Colin Sullivan.

Snake and No-neck are part of a gang in Southie.

The cover is in purples from a deep eggplant in Ty’s suit to a red violet in the broad band across the top — the one with the fingerprint imposed. A narrow deep violet strip separates the two major blocks of color. The bottom two-thirds is a besuited Ty with Gabby’s back up against him. They’re both looking to the right and standing in front of a light-filled cathedral with arches of beautiful stained glass windows. The title is at the bottom in white; the publisher’s name is at the top in white with its imprint in a faux embossed aged silver and the author’s name below that in pale gray. The series name spans the bands: a yellow “Lights” with a pale gray “Out”.

The title is the focus of the text message, Meet Me at Midnight, or the bomb goes off.

2 responses to “Book Review: Meet Me at Midnight by Jessica Andersen”