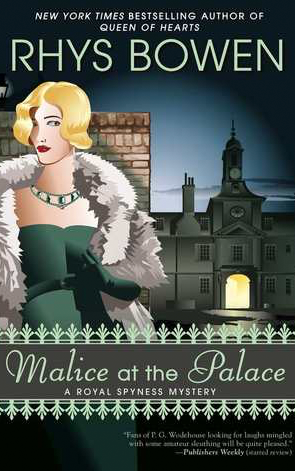 Malice at the Palace by Rhys Bowen
Series: Her Royal Spyness #9
Published by Berkley on August 4, 2015
Pages: 304
Format: eBook
Source: the library

While my beau Darcy is off on a mysterious mission, I am once again caught between my high birth and empty purse. I am therefore relieved to receive a new assignment from the Queen—especially one that includes lodging. The King’s youngest son, George, is to wed Princess Marina of Greece, and I shall be her companion at the supposedly haunted Kensington Palace.

My duties are simple: help Marina acclimate to English life, show her the best of London and, above all, dispel any rumors about George’s libertine history. Perhaps that last bit isn’t so simple.

George is known for his many affairs with women as well as men—including the great songwriter Noel Coward. But things truly get complicated when I search the Palace for a supposed ghost only to encounter an actual dead person: a society beauty said to have been one of Prince George’s mistresses.

Nothing spoils a royal wedding more than murder, and the Queen wants the whole matter hushed. But as the investigation unfolds—and Darcy, as always, turns up in the most unlikely of places—the investigation brings us precariously close to the prince himself.

Also by this author: Heirs and Graces, Queen of Hearts, Crowned and Dangerous, On Her Majesty's Frightfully Secret Service, The Tuscan Child, Four Funerals and Maybe a Wedding, Love and Death Among the Cheetahs, The Last Mrs Summers

Ninth in the Her Royal Spyness historical mystery series and revolving around Lady Georgiana Rannoch in the London of 1934.

In 2015, Malice at the Palace was nominated for the Agatha Award for Best Historical Novel.

I don’t know if I’m becoming more aware of Georgie’s character or if Bowen is becoming more overt with Georgie’s impetuous decisions. I could have sworn that Georgie never used to jump to conclusions on small bits of evidence?? Admittedly, the evidence of that bathrobe would make my eyes roll, and I’d be quite determined to find out what the truth was. But drug running? Gimme a break. *eye roll* After all, Georgie has known Darcy for quite some time now, and if she doesn’t know him better by now… Nor is Darcy the only one she leaps to conclusions about. Traudi, Prince George, and his equerry also come in for it. And each time, Georgie is positive they’re the one.

What complicates Georgie’s life is her family. It simply wouldn’t do for Lady Georgiana to get any old job, not when the king and queen are cousins — Queen Victoria was Georgie’s great-grandmother.

As gorgeous as Mummy sounds, I think she’s despicable. She’s running around with an extremely wealthy man and has no concerns about the straits to which her daughter is reduced. But when Mummy offers Georgie an allowance (with Max’s money), Georgie refuses it, but then she whines on about why the royal family doesn’t give her an allowance so she doesn’t end up taking a job of which they would strongly disapprove. What’s the difference who gives her the money? Are the royals as dim as Mummy that no one realizes Georgie’s financial embarrassment?

Of course Fig is even worse. She knows how broke Georgie is, and is “appropriately” appalled when Georgie mentions living with her grandfather. However, she doesn’t do anything so charitable as to ask Georgie to come live in her old family home. You know, the one with upteen bedrooms? I do love how Fig’s always putting her foot in it. That comment Binky makes about her looks versus how gorgeous Georgie’s mother is, ROFL, absolutely perfect. Then there’s that invite to Buck House for tea with the Queen.

I do like the Princess Louise. She sounds like she was a firecracker herself, *grin*. The Princess Marina is a sweetheart as well, she even invites Georgie to come and live with her and Prince George when they’re married if Fig still won’t have her at the house.

It is a blend of true history and the liberties of the novelist, and Bowen has had fun in weaving the two together to create this tale.

It’s Belinda’s sudden and unexpected return to London that throws Georgie into the streets again. With Queen Mary coming to the rescue. She needs someone to watch over the Princess Marina…and make sure she hears nothing of her future husband’s past antics!

Combine this task with the Home Office and Special Branch needing her help in solving the murder of a young socialite…and you know Lady Georgie will be quite the busy lady what with breaking-and-entering, impersonating others, questioning witnesses, and following clues…

Lady Georgina Rannoch is unmarried without money, jobless, and thirty-fifth in line for the throne with a nose for a mystery. Queenie is Georgie’s totally useless maid. Castle Rannoch is the family seat in Scotland. Binky is her brother and the Duke of Glen Garry and Rannoch; Fig is his nasty, flinty wife. Podge and Adelaide are Binky and Fig’s children. Hamilton is the family butler.

Georgie’s mummy, Claire Daniels, was known as the Bolter as she ran off from her husband, the duke, when Georgie was two. She’s currently living with Max Von Strohheim, a German industrialist. Her maternal grandfather, Albert Spinks, is a retired Cockney policeman who lives in Essex. Mrs. Huggins is granddad’s next-door neighbor (Queenie is her great-niece).

The Honorable Darcy O’Mara appears to be a spy for the government. He’s also an Irish peer’s heir with no prospects as his father, Lord Kilhenny, had to sell almost everything off. He seems to be in love with Georgie, but he’s always flitting off somewhere.

Belinda Warburton-Stokes is a flighty friend of Georgie’s with a mews cottage in Knightsbridge.

The Royal Family
Queen Mary asks her young relative to do her a favor. Prince George is getting married in a few weeks. Edward, the Prince of Wales, is still dallying with the cutting Mrs. Simpson, as Mr. Simpson trails behind. Bertie has married his Elizabeth, and they have two daughters, Elizabeth and Margaret Rose.

Kensington Palace is…
…what David calls the Aunt Heap where two of Queen Victoria’s daughters live, great-aunts both to Georgie: Princess Louise and Princess Beatrice. Phyllis is Princess Louise’s maid. There’s also Princess Alice (Hettie is her maid) and the Dowager Marchioness of Milford Haven. Major Gerald Beauchamp-Chough, Life Guards, is the master of house at the palace as well as Prince George’s equerry. The ghosts include Princess Sophia, who was George III’s daughter who supposedly had a baby for whom she still haunts the palace and Peter, the Wild Boy.

Princess Marina of Greece is George’s fiancée. The stodgy Countess Irmtraut “Traudi” von Dinkelfingen-Hackensack is a cousin of Marina’s and seems to be a companion. A dour, grim, humorless one. Miss Kate Fox had been Marina’s nanny.

Jimmy is the first footman, Elise is the parlor maid, and Ivy is a housemaid.

Sir Jeremy Danville is with the Home Office and has worked with Georgie before. The mean-spirited Detective Chief Inspector Pelham is with Special Branch at Scotland Yard and is annoyed about Sir Jeremy bringing Georgie in on this. Detective Constable Coombs is with Scotland Yard.

Bobo Carrington, a.k.a., the girl with the silver syringe and Kathleen Boyle, had been one of Prince George’s mistresses and one of London’s Bright Young Things. Frederick is the day doorman at Bobo’s apartment building; William is on the nightshift. Mrs. Preston was Bobo’s cleaning lady. Mary Boyle may be Bobo’s mother.

Of course, there had been other mistresses including Poppy Baring. Gussie Gormsley‘s father owns newspapers and magazines; Gussie is getting married to Primrose Asquey d’Asquey. Albert is his man. Noel Coward is one of Claire’s friends as well as a very close friend of George’s. Gertrude Lawrence is an actress; Mrs. Astley-Cooper is a society matron. Hugo is being blackmailed about Gerry. Edward Molyneux is the designer who creates Marina’s wedding dress. Crockford’s is a gambling establishment for members only. Monty Pratchett and Whiffie Anstruther entertain Princess Marina and Georgie at dinner.

Sir Toby Blenchly is a cabinet minister who espouses family values and is about to engage in some slap-and-tickle with Belinda. J. Walter Oppenheimer was Sir Toby’s guest. Prince “Fishface” Siegfried of Romania was one of the men suggested to Georgie for a husband. Only. He’s gay. Willie Lightfingers Buxton was a safecracker. Haseldene is a private clinic in Sussex. Maureen is one of the attendants at Haseldene.

The cover is grays and greens with a sophisticated Georgie with her blonde bobbed hair, her singed green velvet gown, green elbow-length gloves with the white fur stole for camouflage, as she stands in front of a brick wall in the night with Kensington Palace in the background. The usual ribbon with its picot edge lies taut across the bottom as a background for the title and the series information. The author’s name is at the top.

The title is where the danger lies, for there is Malice at the Palace, and Georgie had better watch her step.

2 responses to “Book Review: Malice at the Palace by Rhys Bowen”