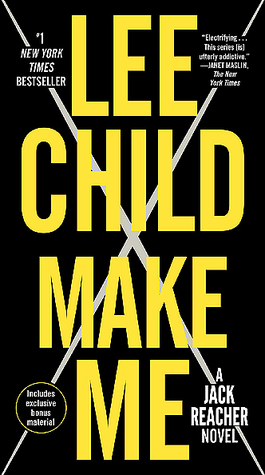 Jack Reacher has no place to go, and all the time in the world to get there, so a remote railroad stop with the curious name of Mother's Rest seems perfect for an aimless one-day stopover.

He expects to find a lonely tombstone in a sea of nearly-ripe wheat ... but instead there is a woman waiting for a missing private investigator, a cryptic note about two hundred deaths, and a small town full of silent, watchful people.

Twentieth in the Jack Reacher thriller series and revolving around a man whom many would consider a bum, but we know him as an upright, honorable man exploring America, this time around, in the grain belt.

It is another pip from Child. And hugely gross at the very start before Child adds in a more personal suspense. Child continued to string me along after the initial shock and left me hanging forever until those driblets started to make sense. …a-a-a-n-d then he sent me off in another direction. It was red herring after red herring, pushing me blindly in one direction and then another. Yet, when I look back, the subtle clues are there. Be warned, parts of this are something of a primer on suicide.

I gotta say, Reacher’s tour of town was a crack-up. No, not the actual tour, but all the excitement it generated. Reacher is walking about tra-la-la, and his trackers are gettin’ so het’ up, lol. Then the back-up “trigger” finally breaks down and made me laugh with her explanation of nationwide offices.

You will never believe that Reacher is taking a step into the modern age of technology. He’ll have to if Hackett’s ease in tracing their moves is any indication.

As usual, I do enjoy it when Reacher lays out his logic, the why of his choices and takedown moves. Child did leave me in total suspense in this story, and while he included some of the usual Reacher habits — a woman he enjoys, buying clothes as needed, there was a mildness to it. At least until that one fight. That one fight was enough to terrify me. I thought this was the end. I still think it could be. I never thought Jack Reacher was vulnerable.

Reacher stops at Mother’s Rest simply because he’s curious about the origin of the name. And he walks right into a small town conspiracy with deep, deep secrets.

Jack Reacher is a former military cop who retired and is seeing the U.S.A. he spent so many years protecting. He’s a wanderer, traveling as the whim takes him.

Theirs is a…
…loose organization of former FBI agents scattered across the country who need to supplement their income; it offers a range of specialized services, mostly security of various sorts. “Special Agent” Michelle Chang was with the FBI before she was forced out. Now she’s based in Seattle. Keever is their man in Oklahoma City.

Ashley Westwood is the science editor for the LA Times who writes in-depth features for their Sunday magazine. Peter McCann is deeply interested in the Deep Web. Michael McCann is Peter’s son who suffers from anhedonia and is unable to experience emotion. Lydia Lair is Peter’s sister, living in Phoenix, and married to Dr. Evan Lair. Emily is their daughter who is about to get married. In Chicago, Eleanor Hopkins is a widow and retired laboratory researcher at the university who knows quite a bit about Peter. Exit is the friend Michael went to meet in Oklahoma.

Mother’s Rest is…
…barely a hamlet sitting at a train stop and surrounded by huge grain elevators. The population really does not want Reacher or Chang in town. John and Steven Moynaham are just protecting their poor, one-eyed uncle’s motel. The Cadillac driver runs the FedEx office. Other participants include the guy with two shirts, the counterman from the diner, the spare-parts guy, ironed-jeans guy, and the hog farmer. Maloney.

Keith Hackett is one of the best. He’s employed by a humongous Ukrainian named Merchenko who offers subscription services. It’s a menu of choices.

The Deep Web is composed of websites that don’t want to be found.

The cover is simple with a black background and the author’s name and title in the same embossed yellow font with the author’s name slightly larger. Two gleaming silver metallic needle-like spears criss-cross with a blurb and series information in opposite corners.

The title is so very Reacher, lol. It’s that Make Me stance that always gets my heart racing.