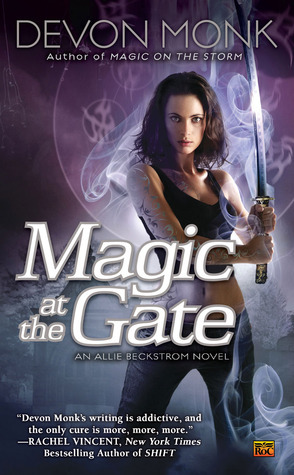 Allie Beckstrom's lover, Zayvion Jones, is a Guardian of the Gate, imbued with both light and dark magic and responsible for ensuring that those energies don't mix. But Zayvion lies in a coma, his soul trapped in death's realm. And when Allie discovers that the only way to save Zayvion is to sacrifice her very own magical essence, she makes a decision that may have grave consequences for the entire world.

Also by this author: Hell Bent, Magic to the Bone, Magic on the Line, Magic Without Mercy, Magic for a Price, House Immortal, Dirty Deeds

Fifth in the Allie Beckstrom urban fantasy series and revolving around Allie, a Hound involved in too many problems.

Dang, this is so confusing. On the one hand, I despise Daniel for his greed, his hunger for power, the way he’ll use anyone (and I MEAN everyone) for his end goal. On the other hand, he says things that make me think he MIGHT be a good guy, somewhere under all that. Things like “I am on magic’s side. To see it … whole — light and dark used equally…” I suspect it’s the main reason I need to read the whole series. I want that question answered. God knows I don’t like Allie.

Whine, whine, whine. Poor me, the fate of the world is on my shoulders. Even though I know nothing. And whose fault is that? Allie’s. Okay, okay, her dad’s as well since he kept her from learning anything about magic. God knows Allie wasn’t too interested in learning more. And Allie’s attitude does not help. She insists on running into any and all situations because she wants to be a part of it. She can take care of herself. Doesn’t want to be left out, and then she bitches because why does everyone expect so much from her?

It seems as if every time Allie goes out with a team, bad things happen. Because Allie is there and is attracting the bad guys, and she’s clueless about how to fight. Her dad has incredible skills that keep keeping her alive, and I do get that Allie wants her dad out of her, but when he can cast spells that will save her life, must she really refuse that help as well.

Victor wants to know if her dad will be a problem. Naw, Allie “won’t let him get in the way”, well, other than every other time he’s set her aside and used her body to cast spells, and she’s been helpless to stop him.

I do like that Allie is so confident. I do wish she’d be smart about it. She fights her dad on absolutely everything. If he told her to drink water when she was dying of thirst, she’d refuse. Okay, she fights everybody on everything. With her dad, I can understand it, mostly, because he does betray her on anything important. But it drives me nuts.

She is consistent. She jumps to conclusions without thinking anything through.

Her dad, for all his intelligence, is so clueless about her as well. He keeps betraying her and then he wonders why she fights him. Well, duh.

Yep. Then we’ve got Allie ignoring the Hounds as she flits off to her newer, more important role in life. Oy. She’s also too tough to be helped in any way. So there.

I do have to agree with Allie about the magic-user vultures who are sitting on the sidelines, waiting to see who wins, and Victor has a minor point as well.

It’s an interesting conundrum Monk has set up with the fatal power of being Soul Complements. It sounds so wonderful on the one hand, but Monk has also made it treacherous. If the pair get too close, they go insane. There’s that story Monk has created of why magic had to be broken, why dark and light had to be separated. It’s not that believable, but okay, I’ll suspend that belief, if only because the whole underlying story is so far beyond belief. That’s not to say its premise isn’t fascinating. I do like the idea of the world she has created, if only because it’s so very different. And Monk has created some interesting spells.

Why didn’t Old Dad tell Allie to bring a vessel with her?? I’m hoping Monk has a reason for this one.

Christ, Allie first says she’d give Zayvion up to save the world and in the next breath she’s willing to let the world go to pot so she can have Zay. Make up your frickin’ mind. Yes, I get that it’s possible to be both heroic and selfish from one breath to the next, but Monk could at least make it believable.

I do appreciate that Allie wants to protect her friends, but must she be so stupid about preventing anyone getting Closed? She’ll let her friends die to keep another friend’s memories. I’m just not getting the reasoning behind this. Maybe it’s that ethical issue of having to stand up for what you believe even when things are bad. But when the choice is between dying or losing some memories, I’m coming down on the side of losing those memories. That, or the Authority could take Stotts into their confidence. It’d keep him alive longer!

Oh gee, Allie is pissed because she thinks Shame ditched her. Well, all she did was purposely put Terric’s life in danger. Why would he be mad about that???

Thank god we get some fun stuff. Turns out Shame can make some “pretty” art. Makes sense since he is a graphic designer.

Ever since the battle, gates have been opening all over town, and the Authority is splintered and much reduced.

What’s worse is that the Veiled are coming alive, nearly indestructible. And Pike is back.

Allie Beckstrom is a Hound with a large share of her deceased father’s company, Beckstrom Enterprises. Stone is an Animate, a stone gargoyle that Allie brought to life, who protects her. Nola is her best friend and is caring for what’s left of Cody Miller. Daniel Beckstrom is her dead father who wants to take over her magic. If she dies to fulfill his dreams…oh well. Violet is Daniel’s pregnant widow and one of the scientists at Beckstrom. Kevin Cooper is the bodyguard who is secretly in love with her.

Zayvion Jones, Allie’s love, is dying in our world while his soul has been shoved through the Gate into death.

…polices all magic users. They have no compunction about Closing someone down, whether it’s through taking their memories or killing them. The Voices of the Authority are members who speak for a particular discipline of magic: Life, Faith, Death, Blood, and Flux. Metaphors are used to refer to the magic wells that correspond to the discipline: Winter for Death (and located in a cemetery), Spring for Faith, Summer for Life, and Autumn for Blood (it’s under the inn).

The Portland Authority
Shamus Flynn uses Death magic like a master, and his boss was Jingo Jingo. In his regular life, he’s a freelance graphic designer. Maeve, Shame’s mother, was wounded on the battlefield in Magic on the Storm, 4. Dr. Gina Fisher cares for magic users. Melba Maide is Beckstrom Enterprises’ highest-paid attorney.

Jenny is one of the waitresses in Maeve’s restaurant.

The Seattle Authority
Some of the Seattle people have come down to help with this crisis and include Terric, Shame’s Soul Complement whom he hurt; Hayden, the three Georgia sisters (who have no first names), Nik, Joshua Romero, Sunny, and the twins, Carl and La.

Magical Enforcement Response Corps (MERC) in Portland PD
Detective Paul Stotts is the head of MERC and in love with Nola.

The Hounds are…
…magic users with the ability to scent magic, to trail it back to the original caster. They work for the public and the police, but it forces them to use magic a lot, which means a lot of pain. Pain they deal with through drugs, alcohol, and self-abuse. Davy Silver is one of them and also fills in as Allie’s secretary for the new pack HQ. He can also feel when one of them is hurting. Some of the Hounds include Sid Westerling, Bea, and Jamar. Pike was the oldest Hound who started the pack to help his fellow Hounds (see Magic in the Blood, 2).

Grant owns Get Mugged, Allie’s favorite coffeeshop. He also bought the old warehouse next door and is leasing the top two floors to Allie for her pack.

Greyson is a Necromorph, half-beast, half-human with a desire for more power. His girlfriend, Chase, is a Closer and his Soul Complement. They both betrayed everything they stood for. They’re alive and locked up in a special prison.

The betrayers in…
…Magic on the Storm include Jingo Jingo who wields Death magic and has betrayed the Authority. He kidnapped Sedra, the leader of the Authority, and used the magic disks Allie’s dad invented to do it. Liddy is dead. Mike and Dane Lannister have disappeared.

Mikhail is dead in life, but alive in death. And the man Allie must satisfy to get Zay back.

Leander and Isabelle are a lesson in Soul Complements, what can go wrong. Leander’s father was the Voice of magic for all of Greece; Isabelle’s family were from England and had a knack for Blood magic.

The solid Veiled are…
…made whole with the magic disks. They include Truance Stimple; Elijah Hemming; Lauren Brown; and, Frank Gordon, the doctor who tried to kill Allie and resurrected her dad.

Hungers are beasts who feed on magic and magic users. Pillars are a thing of dark magic. Closers use Faith magic and are the assassins for the Authority. They’ll also take away your memories.

The cover is a background of purples with a circular glow behind Allie filled with smoky runes. Allie herself is in jeans and a black tank top in the cemetery, holding Zay’s sword upright, ready to slash at the enemy. I’m guessing that that tank top is handy for displaying the tattoos crawling up her arm. God knows Allie wouldn’t normally be wearing it, as it’s too cold in Portland in winter, and she normally dresses in multiple layers. Ahem.

The title is the crux of this story, for it’s the Magic at the Gate that forces Allie to make a deadly decision. 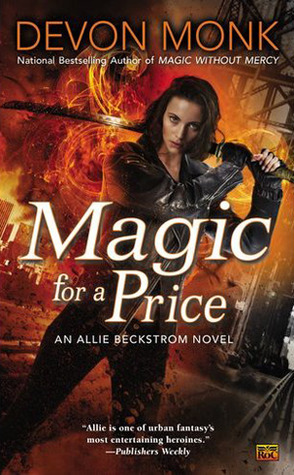 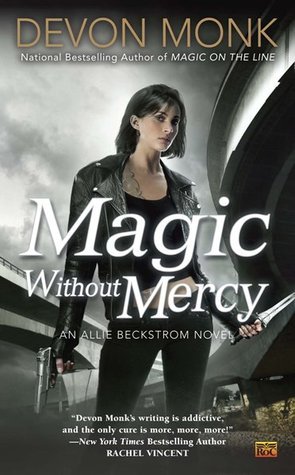 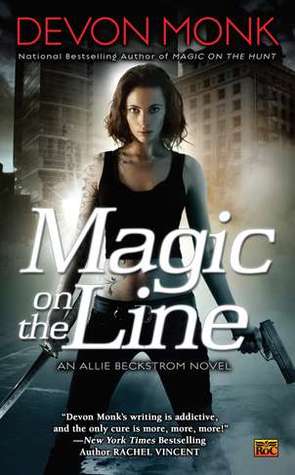 6 responses to “Book Review: Magic at the Gate by Devon Monk”