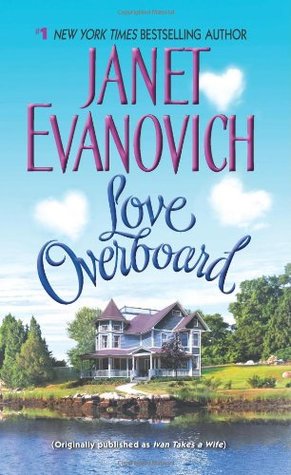 Love Overboard is a romantic tale about a handsome ship'scaptain; a wary wench from Jersey City; a hundred-year-old, two-masted schooner; and an entire town of shoemakers.

There's some getting naked, some blueberry pie, more getting naked, and at the end . . . Okay, I won't tell you about the end, but it's really good and it'll make you feel happy.

Evanovich says this is second in the Loveswept Romance series, but I think she means this is the second of the nine “red-hot screwball comedies” that were originally published by Loveswept. This story revolves around Stephanie Lowe and Captain Ivan Rasmussen in Camden, Maine.

It’s too funny and Evanovich leads us along, dancing those words just ahead of us, as she touches and teases, just waiting to sink in the rest of the conflicts. It’s only eight pages in and already I’m almost sinking under ’em, laughing as I go! Dang, Stephanie has got her work cut out for her!

She’s supposed to cook for twenty-six people on a wood stove, and she can barely heat food up in the microwave. Strangely enough, Ivan is attracted to her and keeps coming up with excuses to not try anything. Stephanie does have a few tricks of her own to keep him off.

Yep, it’s an Ace on the make, and he’s praying a ship’s captain can’t really marry anyone.

It’s a fun story with a woman who desperately needs to learn how to have fun again, how to reconnect with life, how to use a woodstove to cook with, a man with too many worries, and a massive conspiracy behind the scenes as ghosts swing in and out, conspiracy comes to light, and Evanovich turns the tropes on their heads, lol.

To top it off, they have the punkish Melody with her everchanging hair and an embalmed swinger.

Stephanie will do anything for a free plumbing job, even if it does mean cooking for Ivan the Terrible for a week. That swindler sold her a house that was falling apart!

Only, Ivan knows there was nothing wrong with that house. In spite of the ghostly Aunt Tess.

An undercover narcotics cop, Stephanie Lowe was fed up with her life, wanted to try something different, and bought Haben, Rasmussen’s generations-long family house to turn into a B&B. Steve had been her boyfriend for four years; Roger is the roommate he decided to marry. Uncle Ed left her all his money when he died.

Captain Ivan “Ivan the Terrible” Rasmussen commands the Josiah T. Savage, a hundred-year-old sailing schooner, a windjammer. Red Rasmussen, an ancestor, was a pirate. Aunt Tess is three hundred years old, Red’s wife, and a ghost who haunts Haben. Rasmussen Leather Products is a shoe factory. Lucy Pederson is Ivan’s cook and Stephanie’s cousin. Ace is her gallery helper and the pampered son of a corporate lawyer.

The guests on this cruise include…
…Skippy and Loretta Pease, Lena Neilson, Elsie, Mr. Kramer, Mr. and Mrs. Dembrowski, and Melody, the stowaway.

The guests at the B&B include…
…Frank and Eileen Platz (Sophia Schroth would be her envious neighbor while Aunt Rose talks to Walter Cronkite), Mrs. Kowalsky is hopeful, the Jacksons, the Billings, and more.

Stanley Shelton is the plumber Lucy ran off to marry. Amos Anderson is a federal agent. Ted Grisham, the factory foreman, owns the truck and taught Ivan how to make the best bombs. Cousin Joey, who works at Zembrowsky’s Funeral Home, knows Mr. Kulecza. Whiskers will be the new wing chair cat.

The cover is a welcoming and cozy scene of an old Victorian in plum and lavender, perching above a rocky seawall with a path leading to its stairs and surrounded by a manicured lawn and framed by trees under a lovely summer sky. The author’s name is in an embossed and deeper lavender while the embossed title is in script, arching above the house in a soft royal blue.

The title is what happens when the unexpected occurs and Love Overboard falls deep within a conspiracy.