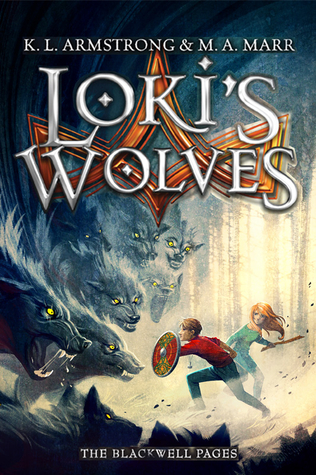 In Viking times, Norse myths predicted the end of the world, an event called Ragnarok, that only the gods can stop. When this apocalypse happens, the gods must battle the monsters--wolves the size of the sun, serpents that span the seabeds, all bent on destroying the world.The gods died a long time ago.Matt Thorsen knows every Norse myth, saga, and god as if it was family history--because it is family history. Most people in the modern-day town of Blackwell, South Dakota, in fact, are direct descendants of either Thor or Loki, including Matt's classmates Fen and Laurie Brekke.However, knowing the legends and completely believing them are two different things. When the rune readers reveal that Ragnarok is coming and kids--led by Matt--will stand in for the gods in the final battle, he can hardly believe it. Matt, Laurie, and Fen's lives will never be the same as they race to put together an unstoppable team to prevent the end of the world.


First in The Blackwell Pages urban fantasy series for Young Readers and revolving around Matt Thorsen and his team in Blackwell, South Dakota.

My Take
This sets the series story up and introduces us to the characters along with their backgrounds. We have a chance to see Matt grow and harden up while Fen begins to find worth in himself.

Jesus, I want to call Social Services on Matt’s parents. Who are these people? I can see how the lectures have made Matt a good person, but couldn’t his parents ever give the kid a compliment?? Take his side? It’s certainly a good example of how parents should NOT act with their children. DO NOT compare your children. Each child is an individual; allow them to be that individual! Arghh!

Then there’s Fen. WTF? If Fen’s people know how this works with the wolves, I should think they’d have a heck of a lot more compassion! And that they’d take care of him better.

Nah, I think it’s weak having Matt run off with Fen and Laurie. Okay so Matt’s the champion…wouldn’t he have to go out and recruit anyway?

Some funny adventures and tragic occurrences.

I like that Matt doesn’t immediately blame Fen for the red pepper flakes incident. That he accepts the truth so readily.

The Story
The Thorsens are many and rule the town while the Brekkes are the thieving, bad boys. A fact that may not matter with the approach of Ragnarök. The Raiders, however, are definitely on the side of bad, and they demand that Fen deliver Thor’s Champion to them.

It shouldn’t be a hardship considering how much Fen hates Matt. So imagine his surprise when he suddenly throws in with Matt and they escape town together to find other descendants of the North, flying in the face of parental expectations and with the words of the Norn ringing in Matt’s ears.

The Characters
Matt Thorsen is the third son in the Thorsen family, but the only Thorsen with the power of Thor’s Hammer as well as the only non-footballing Thorsen — he prefers boxing and wrestling. His father, Paul, is the sheriff and their mother is Patricia. Josh and Jake are his older brothers. His granddad is the mayor. And they’re all descendants of Thor.

Fen and Laurie Brekke are cousins and descendants of Loki. Ed is Fen’s dad, and he’s in prison while Stig, Laurie’s dad, is a lone wolf and simply isn’t around very often. Jordie is Laurie’s half-brother. Mrs. Weaver is a neighbor who babysits for Laurie and Jordie. Kris Brekke is the jerk who’s “taking care of” Fen this year; at least he’s better than Cousin Mandy.

Other descendants of the North
Odin is the leader of the gods and the father of Thor. Ray and Reyna are descendants of Frey and Freya; they’re witches. Baldwin is descended from the likable Baldur. Astrid is Odin’s girlfriend but seems to be coming on to Matt.

The Norn are the Past, Present, and Future; women who know the destiny of gods and humans. Hildar leads the Valkyries. Leaf, Aerik, and Sun are trolls. The Mara are the source of nightmares.

Raiders
Raiders are wulfenkind packs. As a Brekke, you could shift into a wolf and dues had to be paid to the local packs. Skull and Hattie lead the local pack to which Fen must pay his and Laurie’s dues. Paul is one of them.

Vetrarblot seems to be an autumn festival. Sigrblog means summer is coming. Fimbulwinter is the Great Winter. Jolablot is the winter festival of old stories.

Mjönir is Thor’s hammer. Ragnarök is the end of the world. Tafl is the Viking version of chess. The Thing is an assembly of all adults who are not thralls. The Seer casts the runes to learn the identity of the Champion.

The Cover
The cover is kiddish with Matt lunging forward with the shield at a wall of vicious wolves almost surrounding him and Laurie, who’s holding a stick and trying to pull Matt away.

I’m not sure where the title is coming from, as Loki’s Wolves are simply one of the antagonist groups in this.