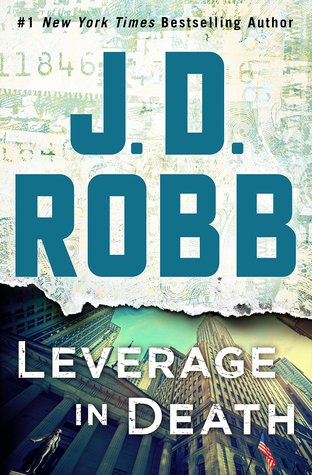 Forty-seventh in the In Death futuristic romantic suspense series and revolving around Lieutenant Eve Dallas and her hunky hubby.

I’m always excited when a new In Death tale is released, and I was bummed at how lackluster Leverage in Death was. It was bland. Well, okay, not so bland for the terrorized families, but for me. Just too distant. I kept waiting to get pulled into Eve’s world, and it just didn’t happen.

Oh, sure, the puzzle as to why all these home invasions and booming bits of terrorism had me thinking furiously, and as usual, it boils down to the simple as Eve sinks her teeth into it. It always amazes me how detectives manage to ferret it out. But if this were my first In Death story, I doubt that I’d be inspired to rush out and get more to read.

I’m thinking that Robb used third person simple subjective point-of-view from Dallas’ perspective, primarily because I don’t remember hearing anyone else’s thoughts or being present at an event that Dallas wasn’t at.

The little things that stood out for me were that McNab and Peabody are about to give Roarke that ten thousand to invest for them. Then Baxter, lol, and those hidden depths of his, the dabbling he does in the stock market. Trueheart’s agreement with Baxter about his skill with the ladies…ooooh. There was an interesting bit of insight from Roarke on how Mavis has matured as a singer. Totally unexpected. And as usual, no one raises an eyebrow at Roarke acting as a de facto Peabody.

The Oscar-frenzy was rather fun, if somewhat subdued. I did enjoy Dallas and Roarke’s Oscar party, *grinning* Poor Dallas. She’s read Nadine’s “Red Horse” manuscript…and it’s even better than The Icove Agenda!!

Peabody and Dallas are pretty quick to judge Hugo Markin as a nasty person; I don’t feel that Robb gave us enough info to make that harsh of a judgment that early in the story.

It’s that hated theme, or is it an excuse?, that I didn’t get a teddy bear or enough hugs, so I get to hurt people. Arghhhh. Get a friggin’ life. Move above it. Do better with your own children. LEARN from it.

And then…ninja woman saves the day!

It’s been a long slog of talks and negotiations between Quantum Air and EconoLift, two airlines at opposite ends of the spectrum. This next meeting should see an end to the speculation…until VP Paul Rogan, devoted company man, devoted family man, walks into the conference room, strapped with explosives.

The NYPSD’s Eve Dallas confirms that Rogan was cruelly coerced by two masked men holding his family hostage. His motive was saving his wife and daughter — but what was the motive of the masked men?

Despite the chaos and bad publicity, blowing up one meeting isn’t going to put the brakes on the merger. All it’s accomplished is shattering a lot of innocent lives. Now, with the help of her billionaire husband, Roarke, Eve must untangle the reason for an inexplicable act of terror, look at suspects inside and outside both corporations, and determine whether the root of this crime lies in simple sabotage or something far more complex and twisted.

Lieutenant Eve Dallas is in charge of Homicide at the NYPSD. Roarke is her megalishcious and fabulously wealthy husband who loves to play with computers. Galahad is their “starving” kitty. Sumshit, er, I mean, Summerset is their major domo and Roarke’s father figure. Caro is Roarke’s highly efficient admin.

Homicide, New York Police and Security Department (NYPSD), is…
…Dallas’ bailiwick where Detective Peabody is Eve’s partner. Detective David Baxter likes the ladies and the clothes. Detective Troy Trueheart is his sweet partner. Detectives Santiago (of the glaring ties) and Reinike with those socks are also partners. There’s a detective and an officer Carmichael in the squad. Officer Shelby is in at the end.

Captain Ryan Feeney heads up EDD, the Electronic Detectives Division. Detective Ian McNab likes the really flashy clothes and is almost as good as Roarke on a computer. He’s also Peabody’s live-in boyfriend. Detective Callendar is one of Feeney’s “boys” and has a good rhythm with Roarke.

Dr Charlotte Mira is the department’s top profiler and shrink as well as one of Eve’s friends. Lieutenant Lisbeth Salazar heads up the Explosives and Bombs Unit (E&B). Harvo is the queen of hair and fiber. Cher Reo is the short and very feisty assistant DA. Officers Gregg and Vols go to the Rogan/Greenspan residence.

Richard Singa is a high-dollar attorney who would like to get paid.

Quantum Air is…
…a high end airline. Paul Rogan was VP of marketing. He absolutely adores his wife and daughter: Cecily Greenspan is a vice-principal at an elementary school, and Melody is their nine-year-old daughter. Iris Kelly is their parents’ helper. Mr Benson is their neighbor. Rudy Roe is Paul’s personal assistant. Kimmi is Lia Berkell‘s assistant in digital marketing. Sandy Plank is a senior VP in accounting. Stu is manning security. Derrick Pearson is president and CEO. He and his wife, Rozilyn, are good friends with Commander Jack Whitney (Dallas’ boss) and Anna, actually Anna and Roz are more like sisters. Liana is the Pearson’s daughter in Rome; Brad is her husband, and Noah is their six-year-old son. Drew is the son who runs the London offices; Sybil is Drew’s wife and is the media chief for Quantum Europe. They have two children: Trey and Jacey. Mrs Bessie Stuben has been with the family for thirty-three years. Jean-Philippe is a cousin who heads up Paris.

EconoLift is…
…a low-budget airline, and brings its own strengths to the table. Willimina Karson is president. Loren Able is legal counsel and Willimina’s advisor. Javier is Willi’s brother; Juliette is Willi’s closest friend. Anson Whitt is Willi’s admin who took on the position when Marcia retired. William O’Donnell is a mechanical engineer.

Former (or interesting) employees at one or the other include a guy who now works for a nonprofit called Resource of Animals Rights (ROAR). Liam Donnelly was a B&E man back in the day with Roarke. He has a sister, Colleen, in the art world in Italy. Mikhail Kinski works as the head of Level A security for Dobb-Pinkerton Financial and lives in Banks’ apartment building.

Jordan Banks is a dilettante trust-fund type (of the Banks Information and Entertainment titans) who swanks about and runs the Banks Art Gallery; he’s also Willi’s recent ex. He’s such a putz that the family pays him to stay away. Morgan Banks is his brother. Maisie Kelsi is the gallery manager. Artists shown there include Angelo Richie (who’s about to have a huge opening), Selma Witt, and Simon Fent, all of whom do figure studies.

Banks’ portfolio has been passed down the line at Buckley and Schultz. Senior Mr Schultz dumped it on his grandson, Tad, who dumped it on Agatha Lowell. Devin Garrison is Schultz’s admin. Cheryl is the receptionist. Banks’ apartment building is owned by Roarke, and he employs Rhoda, a.k.a., Ms Memory Bank, a very sharp security clerk. Bingley is a e-geek in the security hub. Aaron Vogal is the night manager. Neighbors include Ms Yuri, Mr Simston, and Mrs Yuri, Ms Yuri’s widowed mother. Georgie is their Yorkie. Ms Karlin and Mr Howard are newlyweds. Mr Olsen is Karlin’s ex who has custody of their Persian cat, Yasmine. Mr Clark has two children and a nanny. Thad Trulane and Delvinia Otter had a going-away party. Mr Skinner is at the dentist. Mr Lorimer is out. Mr Abbott and Mr Prinz are at the gym. Clinton Wirely, an estate law specialist who loves to write, is an aging queen who loves gossip. His partner, Nigel Tudor, is a cellist, who is off on tour with another neighbor, Ankah Si. Millicent and Gary are lovely people. Pitty and Charo are more friends of Wirely. Hidalgo put together a brunch. Lucius Iler is a registered day trader (for fun) and works the family antique store, Iler Antiques. Third generation money, my dear. His brother, Captain Terrance Iler, lost his life during a terrorist attack four years ago. He had been planning to propose to Felicia Mortimer, a UN interpreter. Their stern, controlling father is Reginald Iler. Colonel Xavier Unger had been Capt. Iler’s CO. Oliver Nordon is a friend of Iler’s. Sergeant Oliver Silverman served under Capt. Iler in South Korea.

Delores Larga Markin, the designer for the Larga secondary line, is the younger daughter of Carlotta Larga, empress of footwear. Carlotta is married to Phillipe. Alora is the older daughter. Hugo Markin is the son of Roger Markin, the casino king. The gorgeous Amelia Lerois is Delores’ admin. Renaldo is the butler.

The Salon is a major, big-news gallery. To have an opening there is to have arrived. Wayne Denby is the gallery director and one of three owners; his wife is Zelda Este, and they have one son, Evan. Joe Kotler and Ilene Aceti, they’re partners, are the other two owners. Cista Daub, Trenton Bean, and Loden Modele are assistants; Dustin Greggor is Kotler’s nephew and an intern at the gallery.

Astrid Baretta is a sculptor. Lollie is a painter who lives downstairs. Franco is Lollie’s very recent ex.

Jeannie and Lilian are nurses at the hospital. Marshall Whitier and Richie Lieberman were doing some underage drinking but their hearts are in the right place. Miller Filbert lives on the Lower East. Tyber Chenowitz is in construction. His wife, Jolie, and he have a six-year-old son, August.

Nadine Furst is a television journalist with her own show, Now, over at Channel 75, and a close friend to Dallas, Roarke, Peabody, and McNab. She wrote The Icove Agenda about a case of Dallas and Peabody’s (Origin in Death, 21), which was made into a movie, and is now up for an Oscar. She’s still dating Jake, the rockstar. Charles and Dr Louise get a mention. Mavis Freestone is Dallas’ absolute best friend who is now a major rockstar; she’ll be singing at the Oscars. Her husband, Leonardo, is a hot fashion designer. Bella is their too-too delightful daughter. Knight at Night is a talk show hosted by Annie Knight, Secrets in Death, 45.

The cover feels so light with the faded green “dollar” graphics texturing the white background. A background that’s torn at the bottom edge where a bomb ripped open this one-third-of-the-cover window into a steeply angled upward-view of New York City’s skyscrapers. There’s an info blurb at the very top with the author’s name HUGE against that white in an embossed metallic teal blue. The title is in a distressed white — that bomb again — over the buildings. Handy thing, that, including the series information in the title.

The title is what the bad guys are looking for, Leverage in Death.