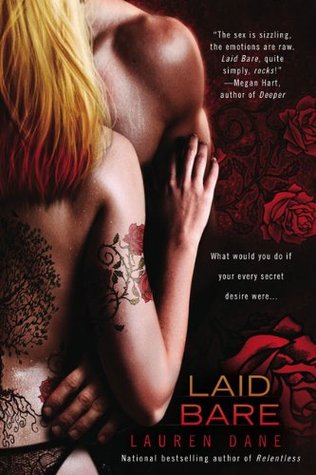 It's been ten years since clean-cut, sexy-as-hell police officer Todd Keenan had a white-hot fling with Erin Brown, the provocative, wild rocker chick next door. Their power exchange in the bedroom got under his skin. But love wasn't in the cards just yet...

Now, life has thrown the pair back together. But picking up where they left off is tough, in light of a painful event from Erin's past. As Todd struggles to earn her trust, their relationship takes an unexpected and exciting turn when Todd's best friend, Ben, ends up in their bed--and all three are quite satisfied in this relationship without a name. As the passion they share transforms Erin, will it be enough to help her face the evil she thought she had left behind?

My Take
I liked the start as well as the concept of the story, however, it too quickly became uneven. Dane has ripples of show with a bit too much tell, although to be fair, it’s not that noticeable as I was involved with the story. The real problem came in when Dane didn’t smooth into a topic, instead she simply drops off — from a great height — into a scene.

I like that Erin is confident in herself. That she knows what she wants. It’s a comfort level we should all strive for, as we are the only ones who truly know what it is that makes us happy as individuals. It’s too bad that Dane takes the long, long way around to letting us know too.

I also love how mature Erin is in letting Todd go. Wow. I’m not sure I could be that decent; I’d be too angry.

Ooh, mama, I love that line: “His eyes slid down her body and back up again. The way his expression went half-lidded and sexy made something low tug and spark after being dead a long time. …he stopped there for several moments of appreciation…”

I like that Todd is finally owning his desires, but it feels too easy. The words he uses are too pat. Too abrupt, too fast. It’s like he’s reading a script that someone forgot to flesh out. This feeling of it being too fast isn’t helped when Ben lets Todd know he’d be cool if Todd wanted more in a threeway as well. I’m not objecting to the concept, but, um, Todd’s a cop. Cops aren’t normally the kind of guys I’d think would be so quickly cool with the idea of a gay encounter, and it’s symptomatic of this entire story. And, yep, that very night…

And as much as I love how careful they are about setting out the rules and stuff, this isn’t realistic. Everyone is way too reasonable and amazingly supportive. I do love it, and it doesn’t lead to much conflict which isn’t a bad thing, it’s just not real. The only place it gets really real is at the end after Todd, Erin, and Ben break it to their families.

I love how supportive her brothers are of Erin, how supportive Todd is. That he doesn’t care if she has pink hair or tattoos, that he wants her to meet his parents exactly as she is.

Nor am I buying this version of D/s. It doesn’t ring true. And yes it may well be because I’ve only read more extreme versions. Besides, where in Todd and Erin’s first relationship ten years ago was there a hint of dominance and submission? Did I miss it? Maybe it was too subtle for me…?

And then we get into the stupid tropes: he needs a whole woman, she doesn’t want to be hurt when he changes his mind so she won’t love him. God, Dane goes on and on about this last one. Why she couldn’t have put this effort into explaining how Todd is suddenly so interested in watching Erin and wanting to share her. The sudden drop of Ben into the mix as their third.

We suddenly learn that Todd loves that his best friend is attracted to Erin. That Ben is there, listening to her and Todd going at it. Why does this arouse Todd? Considering how long it took Todd to become okay with being a dom, this doesn’t feel right. This is where more show would have been good. Show us how Ben listening is turning Erin on, how it excites Todd. Instead it feels as though Dane added this to make it titillating.

Aww, that getaway to Las Vegas was so sweet!

And then we suddenly learn — way into the story — that Ella is having problems with her boyfriend. It’s like chunks of information are set aside in blocks and tossed in without worrying about its integration. Good advice though on having originals of the protection order.

Both Todd and Ben run a security company catering to people’s safety. They both know how terrified Erin is about being in unsafe places, and Todd doesn’t think? Another one who doesn’t think is Detective Emery. The parole hearing is a month away and he just has to call on Thanksgiving Day?? WTF?

I do like Ben’s mom’s reaction to the news that he’s bi: “Then you have lots more options!” Too funny. It’s also funny that she handles this bit of information better than the news of his new relationship. Erin comes through this part of it okay. Sure she’s upset at first but when she realizes how good she has it, and what Ben has to go through, she becomes very accepting. And so very quickly. I feel like we’re in a race here.

The Story
It begins with a meeting between Erin Brown and Todd, her hot, sexy, cop neighbor. Erin’s comfortable with her sexuality, which she can’t say for Todd. He believes it’s wrong to feel as he does, disrespectful, and he runs.

It will be ten years before he will admit he was wrong.

Ten years in which a lot has happened in Erin’s life. One in which she has pulled back from life.

The Characters
Erin Brown is one of three orphaned siblings who formed a band. Her brother Adrian continued with his career after Erin stopped. Brody is the older brother who opened his own tattoo parlor. Ella is one of her part-time employees in the café. Jeremy is her ex although he still manages the band. Adele is the baby daughter they had.

Todd Keenan, a cop in Seattle, left for Boston and the vanilla marriage with Sheila he thought he wanted. Lorie and Dean Keenan are his parents. DJ is the oldest brother married to Renee; their daughters are Mercy and Marianne. Liz is a sister while Joe is the youngest brother.

Ben and Andy “Cope” Copeland are brothers and have been family friends with Todd and his family since they were kids. They’ve now started up BCT Security Solutions providing personal safety. Todd has returned and is buying in. Caroline and Gregory were the couple with whom Ben had a previous triad — yep, Ben’s bi. Their parents are Annalee, a seamstress, and Bill, a retired cop.

The Cover
The cover finds the torsos of Erin and Todd embracing against a dark background of deep red roses. Erin has more her tattoos covering her than those black lace panties do while Todd is shirtless.

The title primarily focuses on Erin and her issues, for they are Laid Bare.