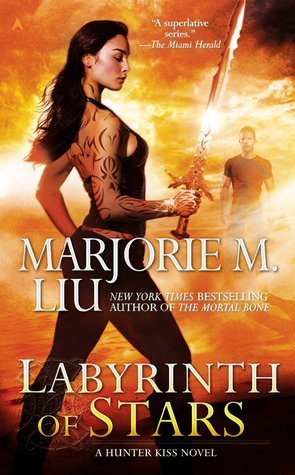 Tattoos with hearts, minds, and dreams. Created to be the armor that protects my body, these obsidian shadows come alive at night—demons made flesh.

After the Aetar nearly kill Maxine’s unborn child, and a betrayal within her own ranks leaves Maxine’s husband, Grant, poisoned and dying, Maxine is forced to attack a race of beings that possesses almost unlimited power. Doing so will require she make a deal with the devil—the devil that lives inside her—risking both her sanity and her soul as she slowly transforms into something more than human.

But even that might not be enough to save Grant, because the very thing that Maxine is becoming is destined to destroy the world.

Fifth in the Hunter Kiss urban fantasy series and revolving around Maxine, a demon hunter.

It’s a horror of a story, so very depressing. Maxine’s and her daughter’s lives are on the line, and she makes a life-altering bargain with the entity she carries within her. Grant is dying before her eyes, from his own sense of self, and yet they both know who Maxine will choose to save.

Maxine’s demons crack me up. I wouldn’t mind having them around, the way they take care of Maxine. Food and drink from out of the somewhere while they gnaw away on their teddy bears and chainsaws with a chaser of engine oil. They have a cute habit of humming rock songs that reflect what’s happening at that moment. Moments that are not always cute. Liu also provides a summary of the purpose of their imprisonment on Maxine’s body. Whew. Another nail in the coffin of the Aetar and their careless attitude toward others.

Whew, reading of the teddy bear backpacks on the backs of these vicious demons helps take that edge of terror away.

It’s their presence that takes the Hunter Kiss series out of the ordinary. It helps that Liu has put a such a huge twist on the whole demon hunter trope. And that “truth” Liu reveals about the demons …*grin*…is a fascinating idea. One that seems preferable to others.

More snippets of Maxine’s childhood and her ancestral past emerge as does one of Grant’s childhood. I have to say that Maxine’s demons are my favorite characters. Maxine fascinates me for her past, her sense of honor and ability to change, and I do like her. I like Grant better. There’s a softness to him and yet he can be hard when it’s needed. I love his compassion and desire to protect.

Now the world is dying and yet Jack says that the world needs Maxine in spite of the desperation caused by the virus and the terror it induces in Maxine. It’s a statement similar to so many others that I’m turned around in my head. Statements that conflict with other comments.

It is a confusion consistent with the earlier stories, and Labyrinth of Stars is well-named as Liu leads us down a bewildering array of paths. Don’t get me wrong. In spite of how convoluted each story is, with all the suggestions, hints, inferences that baffle me, I do love this series. Liu drops snippets that make me want more. I want more background, I want a future.

Death is overwhelming the world, a virus created by the Aetar who want to wipe the earth clean of humanity. To find a cure, Maxine is determined to enter the Labyrinth and find the Devourer. Force him to come up with a way to stop what he created. Save the world. Save the demons.

Maxine Kiss, a demon hunter with an armored right arm from a thousands-of-years-long line of demon hunters, is pregnant, in love, and horror of horrors, married. The demons who live on her skin during the day are Raw, Aaz, Zee, Dee, and Mal. The other demons call her Young Queen. The darkness that lives inside her? A God.

Grant Cooper is a former priest who started up a homeless shelter in Seattle. Now he’s married to Maxine and bonded to hundreds of demons — the Shurik and the Yorana (Mortal Bone, 4). All due to his being a Lightbringer. The race most feared by the Aetar. His ancestry can also be his death, for he needs a bond to another, an anchor, to keep his power from killing him.

Mary is an old woman who knows all about the Aetar and Lightbringers. She’s also got an obsession with marijuana, and we finally learn why. Byron is a serious teen who seems more like an adult. Rex is a possessed human who works at the shelter; his demon allied itself with Grant against his queen. The Messenger broke her bonds with the Divine Lords (Mortal Bone, 4) and is now allied with Maxine and Grant.

Jack Meddler, a.k.a., Old Wolf, Meddling Man, is Maxine’s grandfather, her mother’s father. He’s also an Aetar who slaughters worlds and was the architect of the Reaper Kings’ prison. Sarai is another friendly Aetar who appears in this as a unicorn. The Devourer is a sadistic Aetar, too sadistic even for the Aetar. Seems his “art” is death. What he learned, he played with until even his own were too disgusted and terrified.

The demons were…
…freed from the prison where they were held for thousands of years (Mortal Bone). The Shurik are slug-like beings that burrow into a living being and eat him from the inside out. The Yorana are like incubi and refuse to help. The Mahati are warriors and led by Lord Ha’an. The Osul look like big cats, warrior cats. Oanu is their demon lord. And they’re all starving, held in by Maxine. A’loua is a demon child who brings it home to Maxine that demons are worthy too.

Oturu is a demon who has power over Maxine due to a pledge of friendship when an ancestor of Maxine’s had shown him an act of mercy. Tracker is another demon, imprisoned inside Oturu, and he hates Maxine.

Blood Mama is the “lady lord of the parasites” — “the oldest, slyest nemesis of Maxine’s bloodline — and currently inhabiting the body of the sheriff near Maxine’s farm in Texas.

The voice of a Lightbringer is power, the power to “alter the fabric of any living creature’s soul. The only being, besides Maxine, who can kill an Aetar.

Think of the Aetar as gods. They exist as sentient energy until they inhabit a body. They see humans as toys for them to play with, enslave, destroy. The only beings the Aetar did not create are the demons. Messengers are the soldiers of the Aetar. Lightbringers whose genes the Aetar tinkered with, who were enslaved and taught to revere the Aetar as their Divine Lords. The Wardens were created before the Reaper Kings were imprisoned on a Kiss.

The Labyrinth is a maze, well, yeah, obviously. But it’s an alternate plane, or more realistically, it’s a “quantum highway that connected countless worlds”. All you have to do is survive the ride. The Wasteland is a “sliver on the edge of the Labyrinth, an oubliette.

It’s a golden cover of flames with Grant looking on at a defiant Maxine in black pants and a cropped black tank, in a ready stance in profile to us, her sword drawn, her long dark hair flowing down her back, her tattoos visible. My one question is, if the sword is part of the armor on her arm, why does it appear to be a separate thing? Where is the armor?

The title is where Maxine goes at the end, into a Labyrinth of Stars, into unconsciousness.