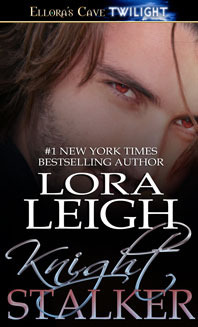 This book may be unsuitable for people under 17 years of age due to its use of sexual content, drug and alcohol use, and/or violence.
Buy on Amazon
Goodreads
Also by this author: Twin Passions, Shattered Legacy, Intense Pleasure, Enthralled, Secret Pleasure, Rule Breaker, "The One", Nauti Angel, Nauti Seductress, Wake a Sleeping Tiger, Collision Point, Cross Breed, One Tough Cowboy, Hot for the Holidays, Dawn's Awakening, Strong, Silent Cowboy, "Night Hawk"

The best I can say of Knight Stalker is Leigh’s unique take on how vampirism works in this world, combining the concept with aliens and Druids. For the rest, it’s a dramatic soap opera of erotica.

To be fair, Leigh does have a story in here, but its primary purpose is the sex.

Using third-person omniscient as a point-of-view is practically required or we wouldn’t have any idea what Cerise or Aldon are feeling, dreaming, or demanding.

I can safely suggest skipping this one. Leigh doesn’t provide us with any idea of where we are, although Europe is a reasonable guess. She mentions Bliss’ brother, but we never meet him nor do we learn how Cadan met Bliss (or the brother) or what she does for work. We’re just plopped in for that sex.

Knight Stalker can also be found in Sherri L. King’s anthology, Manaconda, but the three stories in this are terrible.

Cerise’s host has been killed, absorbed into Cadan, now he must find a mate, a woman who may be bound to this symbiot. If he can prevent the Knights from taking her from him, using her for their own evil plans.

It has been a long hunt as Cadan has searched for the three pods of the most powerful symbiots for the past three hundred years. One contains the Master, one of only three who has the power to defeat the Dark Knights. If Cerise can successfully bond with Bliss…

Bliss St. Clair is the perfect host…and Cadan wants her.

Cadan Gaelan is a daywalking vampire who’s been “alive” for 300 years and is a friend of Bliss’ brother. He is a host to symbiots: Aldon is the male who has legitimate residence within Cadan while Cerise is the female symbiot using Cadan as a temporary host.

The symbiots are…
…aliens from another world who require human hosts to survive. Their females may breed one century out of six.

The Dark Knights are…
…evil warriors who had sought the treasure of Cadan’s lands. Instead they found the alien pods, broke them, released the symbiots within them who took up residence within the warriors.

Mordan is a Druid and Cadan’s father who sacrificed Cadan in 1457 and now leads the Knights. Other Knights include Angus, Cadan’s brother, and Kiran, his uncle.

Marissa Delareaux will take on anything that moves. Thomas is a human who is used.

The cover is dark, fading in around a close-up of Cadan’s beard-stubbled face, his brown hair swept to the side, his eyes red, and head cocked at a teasing angle. The publisher’s information is at the top in a band of black lined at the bottom in gold. The author’s name is in white in the bottom half of the cover with the title below that in an italicized font in blue for the first half of the title and a gradient of red to blue for the roman second half of the title.

The title is about Cadan, the Knight Stalker.