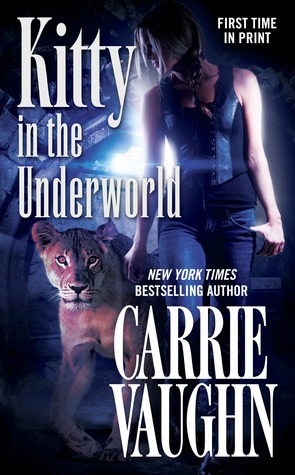 As Denver adjusts to a new master vampire, Kitty gets word of an intruder in the Denver werewolf pack’s territory, and she investigates the challenge to her authority. She follows the scent of the lycanthrope through the mountains where she is lured into a trap, tranquilized, and captured. When she wakes up, she finds herself in a defunct silver mine: the perfect cage for a werewolf. Her captors are a mysterious cult seeking to induct Kitty into their ranks in a ritual they hope will put an end to Dux Bellorum. Though skeptical of their power, even Kitty finds herself struggling to resist joining their cause. Whatever she decides, they expect Kitty to join them in their plot . . . willingly or otherwise.

My Take
Normally, I enjoy the Kitty stories. Vaughn makes them fun and informative. This one? Not so much. It caught the informative bit as Vaughn delves into various Underworld myths, but how it related to the story was weak. It seemed more of stretch than anything else.

The basic premise of the story was good, but its execution bit the big one. I can’t believe Kitty didn’t play to her strengths of talking to people. Of being intelligent. There were areas which were ignored which could have been played up for the drama of it. Other areas that were played up that made no sense. I mean, WTF? It’s a silver mine, and there are no beds or cots for the shapeshifters? Why not? What was the point? That the shapeshifters were merely cannon fodder? Then play that up. No blankets? A camp toilet?? They can haul in all those batteries, coolers, lamps, and the laptop, but they can’t haul in any comforts?

They want to convince her, so wouldn’t the usual sort of ploy include a few comforts?? Do they really expect her to simply fall in line because they kidnapped her??? Please. I take it back. Kitty does suddenly decide that Sakhmet is reliable *eye roll* None of this reads true.

Shouldn’t the story have been paid first?? Who’s more needy in this scenario?

Kumarbis’ insistence on Kitty knowing nothing never was explained. For all the whining he did about this, we never do learn why it was soooo important. His actions at the very end were stupid. What was the point there? Well, maybe “point” is the wrong word to use there…

Then there’s Kitty insisting that Kumarbis’ version is all wrong… Oh, please, of all people she should know that stories change down through the centuries. WHY does she keep insisting on this? It’s just stupid.

The one positive in this is that we do learn of Roman’s origins and his probable reasons for what he’s doing.

Vaughn didn’t make me care about the players…including Kitty. Sure, I’m curious about that thumb drive, but no driving need. Just disappointment.

The Story
A strange pair of shapeshifters bring Kitty up to the mountains to investigate. It may be the last thing she’ll ever do.

And Barcelona has fallen.

The Characters
Kitty Norville, an outed werewolf and considered by some to be the Regina Luporum, is a radio talk show host about the paranormal at KNOB in Denver. She’s working on her second book. Ben is her werewolf mate and a lawyer. Matt is Kitty’s engineer down at the station.

Cormac is Ben’s cousin, and yes, he’s still on parole and still housing Amelia‘s witchy spirit. Shaun, Kitty’s werewolf lieutenant, is still running New Moon, a downtown bar and restaurant that Ben and Kitty own that’s showing a nice profit. It also makes a good home away from home for their pack. Tom took off on a run and came across strange scents.

Angelo is the reluctant Master of Denver; he claims he’s only acting for Rick. Alette is the Mistress of Washington, D.C., a vampire and friend with bad news. Antony is the Master of Barcelona, another vampire. Ned Alleyn is the Master of London. Colette is a vampire stripper. Marid is a 2,800-year-old vampire. Rick is still off somewhere with the Order of Saint Lazarus of the Shadows.

Enkidu, a.k.a., Mohan, is the werewolf representing the first beast and Gilgamesh’s friend. Sakhmet, a.k.a., Samira, is a were-lion avatar. Zora, a.k.a., Amy Scanlon, is the witch who represents Zoroaster. Kumarbis is the 3,000-year-old vampire with delusions of omnipotence.

Dux Bellorum, a.k.a., Roman, a.k.a., Gaius Albinus, is a powerful 2,000-year-old vampire playing the Long Game to take over the world. Seems he wants to destroy it.

The Cover
The cover is dark purples with Kitty in braids and a black leather rivet-front vest and blue jeans, looking down at a lioness at her side. It’s a bright, almost day-like sky behind them with great slabs of rock in the background.

The title is a stretch, perhaps it’s because this Kitty in the Underworld is in a cave.

2 responses to “Book Review: Kitty in the Underworld by Carrie Vaughn”