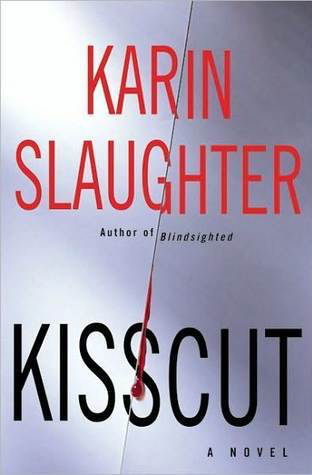 This book may be unsuitable for people under 17 years of age due to its use of sexual content, drug and alcohol use, and/or violence.
Buy on Amazon
Goodreads
Also in this series: MatchUp

Second in the Grant County thriller series and revolving around Dr. Sara Linton, the town pediatrician and medical examiner in Heartsdale, Georgia.

Jesus. Jesus. This was so horrible. It’ll take a strong stomach to read through this childhood horror of being a victim.

In three parts, Kisscut not only explores the childhoods of today’s children but also Jeffrey’s and Lena’s past childhoods, using a third person triple point-of-view from the perspectives of Sara, Jeffrey, and Lena. Sara’s and Jeffrey’s perspectives are split between their own romantic possibilities AND in their concerns over the children — the primary conflict of the story. I felt that Sara’s and Jeffrey’s personal interactions were all tell. Nothing Slaughter wrote showed me their desire for each other. A secondary conflict is Lena’s guilty emotions and her lack of recovery from her captivity.

Lena’s issues are also pretty horrible, but she goes on and on about it. Don’t get me wrong…it is an excellent assessment of the guilt a victim feels for what they endured. The interaction between Hank and Lena is also excellent with the emotional issues they’re each experiencing, and Hank’s response when things get really dire felt so right. I do wish Slaughter had been as good with the Lena–Mark exchanges, which were rather vague and could have generated a lot more tension. More vague were Lena’s thoughts about how Greg and her kidnapper intertwined in her mind. I wasn’t sure what Slaughter was getting at.

There was some interesting background on Jeffrey’s childhood. His parents were absolute crap, and Jeffrey got pretty lucky with the people around him who were outside his family unit. Listening to Jeff reminisce about his courtship of Sara was rather endearing, as he had worried so about the disparity between them. What I am curious about is why Jeffrey cheated on Sara if he’s so in love with her?

I never knew there was a difference between child molesters and pedophiles. And both disgust me. The excuses they use. The kind of regret they feel. Ah, jeez. I ABSOLUTELY loved that scene at the end when Nick and Jeffrey are taking that guy to jail!

I feel confused about Teddy and his kids. On the one hand, his kids say he’d never, and on the other Lena says it’s obvious he doesn’t care. So…which is it? I don’t like that I got left in limbo on what happens to the kids at the end.

Oh, yeah, the fab government education programs “that made sure teachers spent more time filling out forms and attending certification classes than actually teaching kids”. If only the actual education was as important as those bloody forms.

Only one niggle in here word-confusion-wise…I don’t think there is a baseline in rap music. In any kind of music. Now, bassline would make sense.

All I can say is phew. This was quite the intense story without the cozy hometown feel of Blindsighted, 1, but I will say that I couldn’t put it down.

Deadly secrets are exposed when Police Chief Jeffrey Tolliver is forced to shoot a young girl.

It’s the autopsy that reveals the long-term abuse, the mutilation. As Jeffrey and Dr. Sara Linton delve further, trying to make sense of this tragedy, they’re thwarted by the children and their parents while this horror descends further yet into even deeper tragedies.

Dr. Sara Linton returned to Heartsdale as the town pediatrician and medical examiner. Billy and Bob are her two rescued greyhounds. Tessa is her sister who’s dating Devon Lockwood, one of the Linton employees. Their father, Eddie, runs and owns Linton & Daughters Plumbing, with Tessa as one of the plumbers. Their mother, Cathy, seems to be a housewife.

The Grant County PD
Chief of Police Jeffrey “Slick” Tolliver is Sara’s ex-husband whom she’s been carefully avoiding. Detective Frank Wallace is partnered up with Matt Hogan. Detective Lena Adams is still coming back from her trauma four months ago; her blind twin sister, Sibyl, was murdered in Blindsighted. Her partner, Officer Brad Stephens, is still wet behind the ears. Deacon and Percy are beat cops. Marla Simms is Tolliver’s secretary and part-time police dispatcher. Ben Walker is the previous chief of police.

Buddy Conford is the city attorney, public defender, and a logical lawyer who’s been losing parts of himself through the years. Nick Shelton, an agent with the Georgia Bureau of Investigations, is interested in dating Sara. Other agents include Robbins and Peters.

The alcoholic and drug addicted Hank Norton is the twins’ uncle who owns a sleazy bar in Reece called the Hut. Barry is one of his bartenders. Nan Thomas, the town librarian, had been Sibyl’s lover. Russ Fleming had been Lena’s first “love”; Greg Mitchell had been her last boyfriend.

May Tolliver is Jeffrey’s mother, a functioning alcoholic in Alabama. His father, Jimmy, had been an abusive drunk and petty criminal who couldn’t keep his mouth shut. Jean Harris, a dietician at the local hospital, is a neighbor of May’s who’ll keep an eye on her. Jeff’s best friends from elementary school had been Jerry “Possum” Long (he bought out the widow Cat and took over her store) and Bobby “Spot” Blankenship. Darnell “Nell” is Possum’s wife; she runs Madam Bell’s and reads fortunes. Jared is Possum and Nell’s college-going son. They’re embarrassed that he’s attending Alabama U. Should’ve been Auburn.

Heartsdale Children’s Clinic is…
…Sara’s business which she purchased from Dr. Barney. The rude Dr. Elliott Felteau is a young doctor who needs some handholding. Molly Stoddard is Sara’s nurse. Nelly Morgan is the uncomfortable office manager. Some of Sara’s patients include Jimmy Powell who has leukemia, the squirmy two-year-old Sam, Pat Collins the star quarterback (whose mother, Tara, is quite insistent), Gillian Jordan who is always late, and Danny Nelson who needs to see Dr. Matty DeAndrea (Candy is Danny’s mother).

Carlos is Sara’s assistant at the morgue. Dan Brock is the funeral director; he directs the children’s choir in his spare time. John Brock is his father who had started up the funeral home. Audra Brock is Dan’s mother.

The smart, introverted Jenny Weaver was only thirteen and overweight. Dottie Weaver was her mother. Deanie Phillips is one of Dottie’s next door neighbors. The sixteen-year-old Mark and his three-years-younger sister Lacey (a former cheerleader) Patterson are in the thick of it. Teddy, a long-haul truck driver and ex-con, and Grace who is dying of breast cancer are their parents; they own the Kudzu Arms trailer park.

Dave Fine is the pastor of Lena’s Southern Baptist church. Mrs. Gray was supposed to be the other chaperone on the ski trip. Arthur Prynne is a girl-lover. Paul Jennings has a missing daughter, Wendy. Wanda was/is her mother. Grace Markson had been a friend of Wanda’s; they worked as nurses in the hospital in Newark?? Joe Stewart is the perp Nick caught. Wendy James had just started working at a daycare. David Ross is actually the missing Ross Davis. Wayne owned the house.

Skatie’s is a skating rink in town; Buell Parker is their security guard. Steve Mann had been Sara’s first serious boyfriend; he’s married with kids and runs the family hardware store. Betty Reynolds owns the five-and-dime. Bill Burgess runs the cleaners, I think. Suddy’s is a gay bar where Judy is one of the bartenders. Dr. Hare Earnshaw is one of the patrons and Sara’s cousin.

The cover is quite simple with what appears to be a white wall with beams of sunshine floating against it. A slightly angled slash, a kisscut, descends through the center of it with blood dripping out a little over halfway down, bringing to mind a scene in the story. The author’s name is in red in the top half of the cover with the title in black at the bottom. There are a couple of info blurbs…I’d’ve appreciated the series information a lot more.

The title is Kisscut, which doesn’t actually make sense. There is nothing light about this story except for that “light” cut across Mark’s stomach.