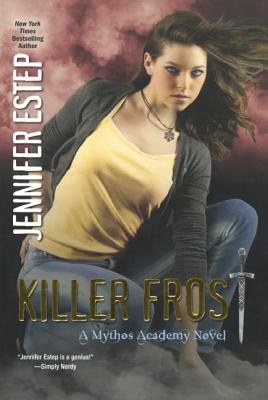 I've battled the Reapers of Chaos before &#8212; and survived. But this time I have a Bad, Bad Feeling it's going to be a fight to the death. . .most likely mine. Yeah, I've got my psychometry magic, my talking sword, Vic, and even the most dangerous Spartan on campus at my side in Logan freaking Quinn, but I'm no match for Loki, the evil Norse god of chaos. I may be Nike's Champion, but at heart, I'm still just Gwen Frost, that weird Gypsy girl everyone at school loves to gossip about. Then someone I love is put in more danger than ever before, and something inside me snaps. This time, Loki and his Reapers are going down for good . . . or I am.

Sixth and last in the Mythos Academy urban fantasy series for Young Adults and revolving around Gwen Frost, Nike’s champion.

My Take
Although this was very realistic with Gwen obsessing over the next Reaper attack, it was wearing to read with the first half feeling as if Estep was being lazy and the last half being a great improvement.

The first part was so melodramatic and too predictable with Linus insisting on the “trap” and Gwen going behind everyone’s backs. That bit about stopping off at the airport to look over a bunch of artifacts when the Reaper threat was so great? Thinking they’re safe simply because they’re near the school? Why didn’t they have people protecting Grandma Frost? I mean, duhhh… It’s been a fun series, and it’s too bad that Estep didn’t make that extra bit of effort to twist the whole story and not just the last half.

Now was not the time to show any weakness? WTF? The Reapers already know how Gwen feels about her grandma. What other weakness is there??

Although, I did like the trap Gwen set later in the story! Very clever. And the final battle and the final death are truly tense and dramatic.

It was cute that Estep brought Rory and the Eir gryphons in on the final battles. Nice way to round things off.

Some nice goodbyes in here as well as a look through the fluttering pages of the future.

The Story
It’s a bittersweet reunion between Gwen and Logan in the days leading up to the Valentine’s Day dance. She loves him as he is, and he believes he doesn’t deserve her, not after events in Crimson Frost, 4.

The Characters
Gwen Frost is Nike’s Champion and a Gypsy with a gift for psychometry, fated to kill Loki, or die. Vic is her talking sword. Nyx is the Fenrir pup she saved. Grandma Frost is a former Champion with the ability to see the future. Rory Forsetti is Gwen’s newfound cousin who goes to the Colorado branch of Mythos Academy, and Rachel Maddox is her aunt (see Midnight Frost, 5).

Logan Quinn is a Spartan and Gwen’s reluctant boyfriend. Daphne is her Valkyrie best friend who is dating Carson Callahan, the Celtic band geek, who carries the Horn of Roland. Alexei Sokokov, Gwen’s bodyguard, is Sergei’s son. Oliver Hector, a Spartan and one of Logan’s best friends, is Alexi’s boyfriend. Aiko is a Ninja and a Protectorate member who also guards Gwen.

The instructors include Professor Aurora Metis, who was Gwen’s mother’s friend and is now Gwen’s mentor; she’s also Athena’s Champion. Nickamedes is the now-crippled librarian who has been so mean to Gwen. Coach Ajax is in charge of their training. Raven is an old woman who works at the school.

The Reapers
Agrona Quinn was Logan’s stepmother and is the head of the Reapers. Vivian Holler is Loki’s Champion and carries the sword, Lucretia. The Black rocs provide the Reapers with easy getaways.

Loki is the god of trickery and is worshipped by the Reapers. Sigyn is his wife, the goddess of devotion.

The Cover
The cover is an intense Gwen crouching in a ground fog, the red roiling clouds of an angry sky behind her.

The title is all about Gwen, for she’s the Killer Frost it all depends upon.

One response to “Book Review: Killer Frost by Jennifer Estep”