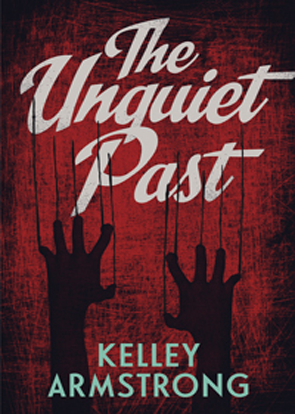 A paranormal suspense, The Unquiet Past is one of seven in the Secret young adult series revolving around seven teenage girls freed from the orphanage after it burned down, setting out to find their past. The focus is on Tess Stacy in and takes place in June 1964 in Canada.

In 2016, The Unquiet Past was nominated for the Snow Willow Award.

It is indeed about secrets. The ones that Tess, Billy, and Jackson each hide for their own reasons.

It becomes a tit-for-tat, lies that turn honest with anger on both sides. It makes sense that the two of them have an adversarial relationship.

Armstrong does a nice job of setting the time period with a touch of politics and a dash of French-English history before French was one of the official Canadian languages (Jackson points out a good reason why the French-Canadians were up in arms about it) along with the fashions that fascinate Tess. It’s mildly reinforced with the attitudes of the residents of Sainte-Suzanne.

It’s a crime of ethics the couple uncovers. Experiments that will make you cringe.

The story was nicely done with a third person simple subjective point-of-view from Tess’ perspective. And yes, there is a happy ending, although not quite the one you may expect.

Like all orphans, Tess wonders who her parents were, and when she gets a slim clue to their whereabouts, she’s anxious to start looking. Hoping to get answers about her visions to the past. To why she was left.

Thérèse “Tess” Stacy is seventeen, born in 1947 with dreams of getting out of Hope. Billy has his own destructive secret in this small town and works with his mother who is a baker.

Jackson Labine has a chip on his shoulder and is backpacking through the Canadian countryside. His mom is a psychologist and his dad is a lawyer. Both are activists into causes. Mamé is his dad’s mother, a Cree, I think.

Sainte-Suzanne is…
…where the address leads Tess. John is a pervert. Etienne/Steve was a witness to something awful 16 years ago. The list of patients includes André W., Corrine P., Dorothée J., Jacques K., and Stéphanie R. who doesn’t like the box. Dr. K seems to be in charge.

An old man is trying to rectify the wrongs done by his nephew.

The Benevolent Home for Necessitous Girls is…
…an orphanage in Hope, Ontario, Canada. Eleven-year-old Maggie loves to read. Nancy was mean as a snake. Agnes Hazelton is the matron in charge. Miss Webster is a home economics teacher.

Métis are the children of French trappers and Native women. Retrocognition is seeing the past, often by stepping into another time altogether but in the same place.

The cover has an aged appearance with the scratchy red paint over a wooden wall. The terrifying part is the silhouette of hands scratching black lines in the wood. The title, in a scratchy white script, is centered at the top and takes up near half of the cover. The author’s name is centered at the bottom in a pale mint.

The title is too, too true, as Tess never knew her parents…and her paranormal abilities take her into The Unquiet Past besides.

2 responses to “Book Review: The Unquiet Past by Kelley Armstrong”