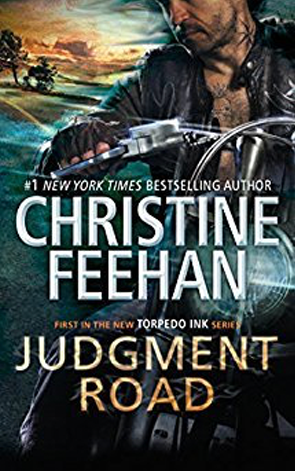 First in the Torpedo Ink paranormal romance series revolving around the members of a motorcycle club based in Caspar, California, next door to Sea Haven and connected to the Drake Sisters and the Sisters of the Heart series. The couple focus is on Reaper and Anya.

It’s that mention of a home in Sea Haven with a wife that had me wondering about Torpedo Ink’s connection to Feehan’s other series that revolve around Sea Haven. Then there’s that statement of the torture each has gone through to make them hard killing machines, including the blackmail to force each “child” to follow orders. Hmmm, sound familiar? That statement about 18 surviving out of 287 just reinforces my impression. Another, subtle, hook was the mention that Czar insisted everyone buy a home nearby. That he’s married to Blythe…(Bound Together, Sisters of the Heart #6 and last).

When presented with a story about a motorcycle club, the stereotype that comes to mind is of illegal businesses like drugs, weapons, women. Only Torpedo Ink seems to be different. Oh, they’re still illegal, but with a heart.

It’s a good thing Feehan is telling us how much the two love each other, for the romance end was not great, even though it uses a third person dual point-of-view from Anya’s and Reaper’s perspectives. It was too clumsy with its yes-no routine and all the melodrama. What redeems it is that sense of family and caring from everyone. That Blythe is a real sweetheart.

Feehan builds the intrigue bit by bit, slowly revealing Anya’s and Reaper’s secrets. There is plenty of action between Reaper and Anya, Torpedo Ink’s interactions with other motorcycle clubs as Feehan sets up the series background, and the waves of action as the MC goes about their business of rescuing damsels in distress. Emotionally, there’s plenty of sex as well between Reaper and Anya along with the traumas Reaper finally reveals.

He wants her gone. She’s a problem. Specifically? She’s a problem for Reaper’s libido — he can’t afford feelings. And it turns out that Anya has her secrets to hide, much as the members of Torpedo Ink do.

When Anya’s secrets catch up to her, Reaper will have to choose between Anya and his club — his heart and his soul.

Anya Rafferty is the new bartender with the mysterious past and some mad bar skills and an affinity for the homeless who lives at the Egg Taking Station campground in Jackson Demonstration Forest.

Torpedo Ink Motorcycle Club is…
…free from their pasts as assassins for their government. Viktor Prakenskii, a.k.a., Czar, is president and lives in Sea Haven with his wife, Blythe, a massage therapist, and their four adopted children: Emily, Darby, and Zoe who are birth sisters and Kenny, on Blythe’s farm (Bound Together).

Airiana is one of Blythe’s sisters and married to Maxim Prakenskii in Air Bound, Sisters of the Heart #3.

Lyov Russak, a.k.a., Steele, is vice-president and is a doctor with a rare gift for healing as well as having an affinity with any kind of alloy. Savva, a.k.a., Reaper, and Savin Pajari, a.k.a., Savage, are brothers and sergeant-at-arms. Luca Litvin, a.k.a., Code, is treasurer and a genius with numbers. Isaak Koval, a.k.a., Ice, is secretary. Other members include Dmitry Koval (Storm, and he’s Ice’s twin brother), Maksimos Korsak (Ink, who does tattoos), Kasimir Popov (Preacher is a sniper who also helps out at the bar on heavy nights), Lana Popov (Widow is Preacher’s sister), Alena Koval (Torch) is Ice and Storm’s sister, Nikolaos Bolotan (Mechanic, who gives off a disruptive energy, loves to tinker with anything electrical, and makes the club specialty gadgets), Pytor Bolotan (Transporter), Andrii Federoff (Maestro who plays a variety of instruments), Gedeo Lazaroff (Player is another musician), Kir Vasiliev (Master is another musician who helps Mechanic with the gadgets), Lazar Alexeev (Keys is another musician and the MC’s usual key to success), Aleksei Solokov (Absinthe can influence people with his voice), and Gavriil (Earth Bound, Sisters of the Heart #4) and Casimir Prakenskii (Fire Bound, Sisters of the Heart #5), Czar’s brothers, are newly patched members. (I’m guessing that Lev Prakenskii from Water Bound, Sisters of the Heart #1, and Stefan Prakenskii from Spirit Bound, Sisters of the Heart #2, are also Czar’s brothers). The prospects include Fatei who works as a bouncer, Glitch, and Hyde.

Employees working at the bar include Betina and Heidi who are waitresses. Tawny is a hanger-on.

Cat is a friend of Code’s, and she’s an amazing hacker. Bronson is a park ranger. Harry Bannister is a bar patron and biker whose son has issues. Deke, Trident, and Skid won’t take no.

Sea Haven
Inez works at the grocery store. Leslee is the spa director and massage therapist at a local inn; she likes to walk her dogs at the Egg Taking Station. Jonas Harrington is the sheriff in Sea Haven and married to Hannah Drake Harrington (Safe Harbor, Drake Sisters #5). Jackson Deveau is one of his men (Hidden Currents, Drake Sisters #7).

Demons Motorcycle Club is…
…experiencing issues. Hammer is president whose wife, Maria, has cancer. Razor is likely to be the most lethal. Tether is their youngest and eager to prove himself. Weed and Shaft.

The Diamondbacks Motorcycle Club is…
…big, world-wide big, and Torpedo Ink does as little as possible to attract their attention. Plank is president of the Mendocino chapter; Sylvia is his wife. Hogan, a.k.a., Jiff, is their enforcer. Pierce, a former SEAL, is their very interested road captain.

The Ghosts run…
…a San Francisco-based nightclub with an emphasis on gambling and have ambitions to get so much bigger. Raul is the manager. Tom Randal is an investigator on retainer for the Ghosts while Steve and Mike Burrows are hit men on retainer.

Sorbacov and his murderous son ran the “school” and “recruited” children by murdering parents and using horrific threats to force the children into becoming assassins. Helena was one of the “instructors” who loved torturing the kids.

The cover is wild with its background of the road and an orange and blue sunset and a cropped image of Reaper (from below his eyes to his knees) with tattoos up the wazoo, scruff on his chin, and wearing a black leather jacket, pants, and fingerless gloves. An info blurb in white begins just below the handlebars with the author’s name in a blocky three-dimensional white. The series information is below this in orange (with the actual series name in white). The title is below this using a gradated white to textured orange.

The title is the ultimate conflict when the club and Reaper ride down Judgment Road.