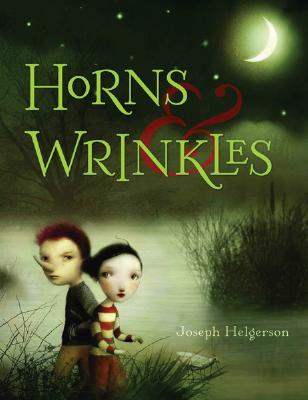 
A standalone fantasy adventure story about two children — one good, and the other, well, not-so-good, in Blue Wing, a little town alongside the Mississippi River, in early May.

I like Helgerson’s start with the mean Duke and then Claire’s note of the “queer old chunk of water”. That narrative hook pulled me right into Horns & Wrinkles, dying to know what came next in this quirky story as told in first-person protagonist point-of-view from Claire’s perspective.

There is a sweetness and innocence to Claire despite her knowing her cousin too well while Duke fits right in with those nasty, too funnily dressed trolls. As for the troll culture Helgerson has dreamed up, wa-a-ay too funny.

Suddenly all the other rhinos lowered their heads…”

It’s all about bullies and the horrible things that happen to them…and the only way they can change back.

You do have to appreciate Claire’s adventurousness and quickness of thought as she works to stay ahead of this trio of river trolls.

How can you tell if a river’s under a spell? River trolls, rock trolls, blue-wing fairies — the usual suspects — the stretch of the Mississippi where Claire lives has rumors of them all, not that she’s ever spotted any.

But then Claire’s cousin Duke takes a swim and sprouts a horn — a long, pointy, handsome thing. After that, Claire doesn’t have much choice but to believe that something rivery is going on, especially since she’s the only one who can help Duke lose his new addition.

Claire Bridgewater is twelve years old with a love for rivery animals such as Lottie, her box turtle who lives in the closet and Three, her toad who lives in a wool sock. Tessa is the youngest sister while Lillie is the older and Fragile Fran is the oldest. Mom works at the department store. Dad works the graveyard shift at a bakery. Grandpa Bridgewater comes for the show and tells of the horns their great-great-great-grandpa Huntington Bridgewater and his brother Floyd had had back in the day. Nettie is the girl who became Huntington’s wife. Second-cousin Alfie had a run-in with river trolls; Cousin Ernie couldn’t help touching Alfie.

Duke is Claire’s mean young cousin whose parents have finally resorted to discipline. His parents are Norm who runs the No Leash Dog Obedience College and Phyllis who is a school nurse. Duff is their springer spaniel.

Blue Wing is…
…a small town along the Mississippi River. Sheriff Tommy Pope is realistic about the river trolls. Dr. E.O. Moneybaker is the only rhinoceros horn expert in the area and lives in a retirement home. One-shot is a newspaper photographer.

Big Rock is…
…a town where sits Trolls & Things, a shop that sells screens by the old lady in the canoe, a blue-wing fairy with no name who has an older brother. Pumpkin is his retriever. Prince Leopold, a muskrat, and Princess Trudy, a raccoon, are friends of hers. Farmer Bailey’s field is home to the sinkhole.

Stump, Squeak “Biz” (he intends to be King Biz Mossbottom the First, and he’s married to Muck, Weed, and Scale Crowleg, all sisters who can see a day ahead into the future) Mossbottom, and Jim Dandy are river trolls in cahoots with Duke. Two-cents Eel-tongue is Jim’s mother while that no-good Double-knot is his missing father. Fancy Leechlicker is Jim’s sulky wife. Duckwad is Stump’s missing brother. Wishy Gartooth can see into next week, if the pay is good. Great-aunt Tar-and-feathers Slice-Toe, Biz’s relative, owns a stone glove.

Reliable St. John is a cricket.

Bodacious Deepthink, a.k.a., Bo the Great Rock Troll, has terrified the area’s trolls with her obsession with the moon.

The cover is soft browns, dark ones and light ones, for it’s night along the Mississippi River with a sliver of moon in the sky, shining down on the river with its islets of grass. It’s the rhino-horned dark-T-shirt-wearing Duke standing back-to-back with the defiant Claire in her red and white horizontally striped top with both staring out of the cover.

The title is a combination of the rhino Horns & Wrinkles in plans and old people caught up.

Book Review: The Wizard of London by Mercedes Lackey

One response to “Book Review: Horns & Wrinkles by Joseph Helgerson”