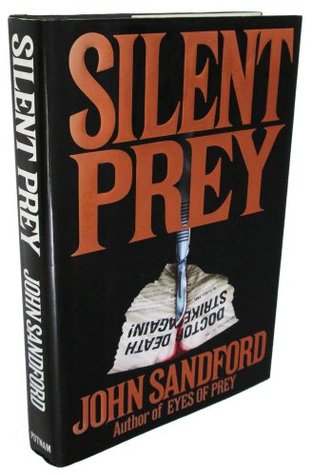 Here, in his fourth Lucas Davenport novel, Sandford continues the story of the brilliant, insane pathologist of Eyes of Prey. Doctor Death continues his experiments, searching the eyes of his dying victims for what they can reveal.

Fourth in the Lucas Davenport thriller series based in Minneapolis, and revolving around an ex-cop. This story takes place in New York City, two years after Eyes of Prey, 3, and fulfills the promise in its introduction *shudder*.

My Take
This is horrifying. Sandford sets the mood with the courtroom and the horror the prosecutor feels about Bekker, and it only gets worse with this brilliant mad man. The worst of it is that I keep expecting Bekker to go off the rails and screw up…and he never does! With all the drugs he’s downing, I am really impressed with how easily he manages to evade everyone.

There’s a reality to this: dirty, gritty, and messy. Sounds like real life, doesn’t it? It’s also impressive how easily Lucas slides undercover and under the covers.

Jesus, people, women, should never relax their guard. No matter who is around, no matter how unassuming or unthreatening they appear. Jesus…

What a nutjob Bekker is! And back to my old whine, about parents being licensed. Part of why Bekker is the way he is, is due to his parents. If they’d been denied…if parents who weren’t psychologically suited to having children weren’t allowed to have children, can you imagine how much lower the crime rate would be?

I must say reading about Bekker’s drugtaking routines crack me up. He’s like a crazed connoisseur who’s cracked up, a self-indulgent and petulant child who picks and chooses his moods through better chemistry.

They set up this elaborate sting, and then leave cops Bekker will recognize hanging around. WTF? Wouldn’t it have been smarter to put the recognizable ones in hidden locations? Or not let them show until after everyone is seated?

Hmmm, relationship revelations in this one. Lucas realizes why it would have never worked with Jennifer, why Lily wouldn’t work—she has her own realizations, and how he feels about Barbara. It’s interesting, looking at Lucas’ bedroom antics. Essentially he sees a woman and wants to climb into bed with her; now if a woman were doing the same thing…

I can understand the attraction of doing the vigilante bit. Eliminate the problem, fix the city, make it safer. Sure, the choices seem clear cut, but then the power gets to you. You start thinking about how to make things “safer”, “cleaner”. Feel more of a need to protect yourself. The choices start to get out of hand, and people die who shouldn’t. People who were…inconvenient for you. Where do you draw the line? It’s too easy to fall into that trap, and the more people you off, the easier it gets; it’s a better choice to simply not start.

The Story
Remembering Lucas’ charisma with the media, Lily Rothenburg talks her boss into pulling Lucas into their investigation in New York City. The NYPD is getting slammed for Bekker’s swath of destruction, and they need all the help they can get. With that and a mysterious string of murders the media hasn’t yet connected.

Only no one is telling Lucas about the underlying motives.

The Characters
Lucas Davenport, ex-cop, has delved into his game designs, making more money than ever, expanding into simulations of police tactical problems. He’s doing so well that he may have to rent an office. Jennifer is the mother of his daughter, Sarah, and probably about to marry a guy from Lucas’ old station. Rick and Stephanie are Lucas’ helpful neighbors.

New York City PD
The now-divorced Captain Lily Rothenburg is currently working with a deputy commissioner, John O’Dell. Detective Walter Petty is/was one of Lily’s best friends from her childhood, a guy who would and did do anything to help her out. An ineffectual cop until he found his métier in computers. Lily is seeing someone new, a guy a lot like Lucas, Dick Kennett from Intelligence, and he’s running the Bekker case. He’s also got a great boat, the Lestrade. Lieutenants Kuhn, Huerta, White, Diaz, Blake, and Carter and Detectives Annelli and Case are working it along with him. Barbara Fell is the detective they pair Lucas up with. Aaron Copland is O’Dell’s driver. Lieutenant Bobby Rich has some information as does Detective Darius Pike, a cop in Charleston.

Dr. Michael Bekker, a psychopath, was savagely beaten (yeahhhh!!) in Eyes of Prey. Cons he spoke with in prison include Clyde Payton who thought Bekker was a rock star (!), Tommy Krey, and Burrell Thomas who is out of the picture. Manny Johnson and his girlfriend, Rock Hudson, have some info on Burrell and Rayon Thomas, a guy who gave Bekker some useful advice.

The vigilantes
Thick and Thin are how Bekker saw them: the assassins. Fred Waites was a community activist; Arvin Davies was a professional bad guy; Martin Kays; and, Lowell Jackson is an ex-burglar. Cornell Reed is a witness who fled; his dad, Don Reed has a successful gas station. Sergeant Clemson and Jeese show up at Lacey’s.

Edith Lacey is a retired widow who worries about losing her money, becoming homeless. Bridge Land is her only friend who can still get around; she despises “Bekker”. Babe Zalacki and Rose Arnold are fences. Jackie Smith is a crime boss Lucas, um, persuades to help out. Mrs. Logan was Walt’s observant neighbor. Terrell Scopes is with the Federal Reserve. Buonocare is with Citibank. Oliveo Diaz is an observant pusher.

Bellevue Hospital
Dr. West, a.k.a., Lew Whitechurch, feeds Bekker the drugs he needs. Mark works for him. Dotty Bedrick is in housekeeping and has a good theory.

Some of Bekker’s victims include Cortese, Foen, and Shelley Carson is a graduate nurse. Katherine McCain had been a friend of Bekker’s wife

Minneapolis-St. Paul cops
Harmon Anderson, Del, and Sloan are worried about Bekker gunning for Lucas. Melissa Yellow Bear is an operator. Raymond Shaltie is the sheriff’s deputy in charge at the courtroom. Kelly Larsen is a St. Paul cop who found Lucas. Captain Quentin Daniel will be retiring in a couple months.

The Cover
The cover is a solid deep, deep gray background with an embossed silver font for the title and the author’s name (it’s a flat silver for the info blurb). The graphic is a scrap of an upside down headline: “Doctor Death Strikes Again!” A scalpel and a stain of blood emphasize the message.

I‘m not where the title fits in unless Silent Prey refers to Bekker’s victims. I suppose it could also be the sting that’s set up.