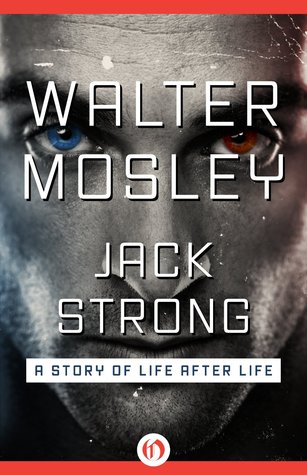 In a Las Vegas hotel room, a man awakes to confront his destiny.Dreaming, Jack hears voices: a frightened child in a hospital, a woman cheating on her husband, a death row inmate. When he wakes, the voices recede, but they do not vanish. He is in a luxurious hotel room on the Vegas strip, and his body is covered in scars. Jack Strong is a patchwork man, his flesh melded together from dozens of men and women, and his mind is the same way. Countless lifetimes are contained within him: people whose lives were cut short, and who see their place in Jack as a chance to make things right.On behalf of one of them, Jack reignites a feud with some corrupt casino bosses. Drawing on the skills of another, he beats the life out of two bodyguards. Jack fights for control as he lurches from impulse to impulse, certain that somewhere within him lies a soul. The answer may lie with whoever is tailing him in a sleek black car--if Jack can somehow confront him.

This 52-page short story is a prequel introducing Jack Strong in this science fictional urban fantasy, a potential series that I suspect will roam the world.

My thanks to NetGalley and Open Road Media for providing this ARC for my enjoyment.

My Take
It started as I expected a Walter Mosley to start, with an excellent use of dialect and sentence structure, but Mosley quickly took me into a completely different world. One that was both small and yet expansive.

I’m both curious and apprehensive, but then again, I remember: Mosley. The apprehension comes from wondering how he can bring the tension to the inner men of Jack Strong, seeing as how it was so easy for Lance to meld. The curiosity comes from wondering where he will take us on this journey of redemption, and seein’ as it’s Mosley, how he will create the tension. I know, I seem to be repeating myself, and actually I’m not. I’m a Mosley fan, and what may be difficult for other writers is a slight challenge for him.

As the subtitle says, it’s “A Story of Life After Life”, and that’s where Jack Strong is headed. To find closure for the many personalities and souls within himself. On the outside, he’s a Frankenstein of a man, all patched together from various parts. On the inside, it’s the same. A Frankenstein of the inner voices, carrying each individual’s abilities and knowledge. It makes for very interesting reactions. Like a database of people, abilities, and information Jack can call up at will.

I liked the technique Mosley used to shift personalities, and while I liked how easy this was, I’m hoping Mosley will create problems down the road with this. Bring some tension into this. Don’t get me wrong, there’s tension in this story. Plenty as we’re struggling to figure out what’s going on, and it’s the tension in future stories that I’m curious about.

Part of the tension in this one was reading how hard Ron worked to get Anna to acknowledge him. And I’m still trying to imagine how the sex works! Sure sounds interesting…being able to experience both the female and the male as well as bringing all the personas together at the same time!

It’s gonna be a fun ride, and I’m looking forward to the multitude of adventures as we peek into each one’s lives as they fix what was wrong before they died.

The Story
He woke in a cheap hotel room, confused, seeing too many possibilities of who he or she was. His body was a patchwork of parts and colors. The penis was, unexpected. As he examines himself, tries to make sense of the swirls of thoughts and lives he’s never experienced, the memories of actions he’s never taken, one memory comes to the fore.

The Characters
Jack Strong is a patchwork of parts, thoughts, memories, and knowledge: the immoral Lance Richards, Sergeant William Tamashanter Mortman is quite skilled with his hands, FBI Special Agent Ron Tremont, Connolly Wright, Minna Achet, the hung Stumper Brown, Dr. George Forsythe comes in very handy as does the very competent counterfeiter Johnetta Reis, and the serial-killin’ Aldus Ray are among the crowd.

Rosetta Jeannette Lawson is a waitress at a diner who helps Jack. Anna Wolf was Ron’s partner back in the day, the alive day. The Cherry Bomb is one of the clues. Their supervisor, Mason Daub, was resentful of Anna. Filo Drammon sent up red flags on Anna.

Tom Grog is Jack’s oversight manager, and he works for Convocation, the organization which raised Jack.

Sammy is the Samoan guard who tries to take Lance down with Trapas and Kraut. Siggy Petron was taking from Ira Toneman, his boss. Bernard Lime had been the accountant. Lara Santini was the daytime bartender. Pedro is her current man. Roaches is an old acquaintance of Lance’s; his cousin Rolly works at the Beamer Motel. Bernard, a.k.a., Berry, was Lance’s stepbrother. Ed Coffers was the moving man, Lara bypassed because Ed sent Winters.

Albert is the hotel valet. Tony is the desk clerk with two sisters, Esther and Shoni, working the switchboard.

The Cover
The cover is all face. Jack’s determined face with his multicolored eyes.

The title is the man, “Jack Strong”; the subtitle is what it’s all about, “A Story of Life After Life”.