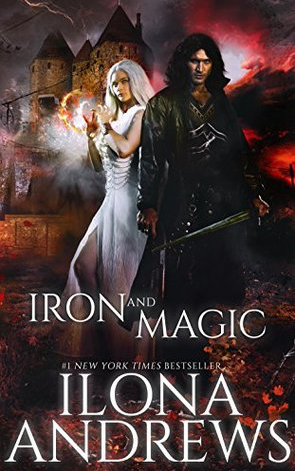 First in the The Iron Covenant (9.5 in the Kate Daniels universe) apocalyptic urban fantasy–science fiction series and revolving around Hugh d’Ambray, Roland’s former warlord. If you’re interested, there is a chronological listing of the Kate Daniels Universe on my website.

NOTE: I recommend reading Iron and Magic BEFORE Magic Triumphs, 10.

The conflict between Hugh and Elara makes Iron and Magic a fascinating read! And so glorious to see the mighty Hugh brought down!! And yet, Andrews did a 180 on me and yanked me over to his side. Humph. Never thought I’d feel sympathy for him.

Elara is such a strong woman and a perfect match to go up against Hugh, and it’ll make you laugh at their asides when they’re in public, lol. Both have their issues — internal and external — that they must face.

“Good people didn’t hate without a reason, so they grasped at any pretext, no matter how small, that gave them permission to hate. A line in a holy book. The color of a person’s skin. The brand of their magic.”

It’s his battles with Elara that force him to reflect back over his life with Roland. The actions he took and the feelings he had during and after. It takes some time as Andrews is very subtle about Hugh’s realizations and regrets, stretching it out. She makes it a realistic discovery for him, as he encounters normal people and discovers how they view him. A view that disturbs the man who is no longer blood-bound to Roland. And Hugh finally figures out how Kate sees him. How Roland used him. It’s an enlightening story on several levels, as Hugh and Elara each learns to respect the other.

It does help that Andrews uses a third person dual point-of-view, allowing us access to Hugh’s and Elara’s thoughts and feelings. Although, I do wish Andrews had been more obvious about Hugh’s regrets — it’s only that having read Magic Triumphs had already prepared me for that.

There’s a lovely bit of timeline that forced me to think back to when Roland forced Curran to give up the Pack, when he started building outside Atlanta, kidnapping Saiman, torturing his own Iron Dog, challenging Kate. The way Andrews presents it isn’t chronological, so it may make you take a step back.

Roland is a practical man, and when he set up the People and their casinos, he certainly had public relations in mind, and Andrews gives an excellent back history on how Roland went about this.

It’s an excellent story, and I’m looking forward to the next in The Iron Covenant series. Hmm, I suppose you could consider Magic Triumphs that next tale… In that case…I still want another one.

When Roland discovers the truth of the Iron Dogs, he lashes out, an act that rouses Hugh from his drunken binge. But there’s no money, no shelter, no food for him or his men, and the only way to get any of it is an alliance.

And Nez is hunting Hugh and his Iron Dogs. Considering that one Master of the Dead can wipe out an entire US Army platoon with one undead, it’s not looking good. Nor does it help that Hugh has a reputation for betraying his allies.

Luckily, there’s a village of peaceful folk in need of protection, IF their White Warlock will accept.

Hugh d’Ambray, “a big, mean sonovabitch that nobody wants”, is a natural healer, compelled to heal, even as he inflicts the hurts. He was also Roland’s Warlord who bloody well delighted in killing.

The Iron Dogs were/are…
…the elite army Hugh had built for Roland. Lamar, Centurion of the Second Century, had been an intelligence officer; Bale is a berserker; Stoyan, Centurion of the First Century, had been crucified for refusing an order until Kate saved him; and, Felix had been a Dominican and is now the scout master. Barkowsky wanted out, Arend Garcia will prove their worth, Gina, Sharif is a shapeshifter scout, Williams, Cordova, Iris, Karen is another shapeshifter, Liz, Irene, Serana, Kelly, Yvonne Faure assesses potential archers, Allyson Chambers, Renata Rover, Richard Sams, Irina is a scout, Hanzi works the ballistae, and Ken Gamble.

With Hugh forced out, his best friend from childhood, Rene, took a job as a teacher of high school French. Other Iron Dogs, including Camilla, Caroline, Purdue, Rockfort, and Ivanova are all dead.

Baile in Berry Hill, in the Knobs, Kentucky, is…
…the name of the castle that serves as headquarters for the village of Departed (the Remaining, an enemy, were left behind). The castle itself was imported and built by Mitch Bradford for his second wife, Becky.

Their leader is Elara Harper, the White Warlock, the Abomination; Raksha is her bay mare. Rook is her silent spy. Dugas is her druid advisor who deals with logistics, imports/exports, trade agreements, etc. Savannah LeBlanc is the head witch of their covens and oversees infrastructure, internal administrative issues, and is the head of the legal department. Johanna Kerry, a deaf mute, is in charge of research and development as well as another of her advisors.

Caitlyn works in the kitchens. Vanessa, a paralegal, has ambitions; Melissa is her boss. Nadia and Beth work directly for Elara. Darin and Conrad are both guides. Saladin is their coroner; Preethika Manohari runs the settlement’s pediatric clinic; George; James Cornwell is the keeper of poisons, of growing them; Malcolm; Gloria; Emily; the Waterson, Garcia, and Lincoln families; Radion is a blacksmith along with Edmund and Gwendolyn; Lisa; Marcus; Micha; Rodney; Leonard is the head druid scholar; Serenity and the other two Heltons are seers; Oscar is a mechanic; the twelve-year-old Magdalena is psychic and very useful in the tunnels; Jay Lewis is the foreman of the bulldozer crew; and, Nikolas.

Dakota is a massive Clydesdale. Karakachans are the ideal herd dog, wolf killers. Their exports include beer, cheese, milk, wolfsbane, and medicines such as RMD, today’s equivalent of Neosporin and very effective against vampire bite infections, henbane, and jimsonweed. Cedric is the dog Hugh healed.

Austin Dillard is a trader. Aberdine is a “good, Christian town” with access to a ley line. Nick Bishop is the town’s chief of police, National Guard sergeant, and Wildlife Response Officer. Redhill had been the town where Alex Tong, once Radion’s apprentice, and Diedre had lived. Phillip had been her dad; Courtney had been Alex’s girlfriend. Wayne Braiden and Jane Melissa Harmon are Diedre’s uncle and aunt. Michelle is their daughter and Tyler is their dog. Commander Rufus Fortner, a neo-Viking, is the head of the Lexington Red Guard. His wife, Marissa, can split people with her axe.

The Pack is…
…a good customer and based in Atlanta under Jim Shrapshire, the current Beast Lord. Dali Haimau is his mate and his sole pillar of support. The former Beast Lord, Curran Lennart, a First, who is married to the pregnant Kate Daniels, stepped down. Ascanio Ferara is a bouda whom Hugh had tortured. Raphael and Andrea Medrano are the alphas of Clan Bouda. Ice Fury is the shapeshifter pack in Alaska with an interesting tidbit.

Ghastek, a Master of the Dead and head of the People in Atlanta, is now Kate’s Legatus.

Black Fire Stables is located outside Charlotte and owned by Matthew Ryan. Maria is his wife. Charlie and seventeen-year-old Sam (who isn’t right) are their sons. Bucephalus “Bucky” is a white war horse, a Percheron-Andalusian cross.

The People are…
…made up of necromancers who pilot the dead, vampires. Their leader is Roland, the Sharrum, the King, Nimrod the Builder, a man glowing golden with magic that warmed. A poet, an inventor, a scholar, a father who was a nearly immortal being with godlike powers…and Kate’s dad. Voron had been the Warlord before Hugh and had started building the Iron Dogs. Kalina had been Roland’s wife and Kate’s mother, until she ran. Christopher Steed is the only Legatus Hugh had been able to stomach.

There is a hierarchy of levels among the navigators which start with apprentices, who become journeyman, and eventually Masters of the Dead. The best one hundred Masters becomes a Golden Legion, which is led by the Legatus, Dr Landon Nez, a Navajo kicked out of his tribe for his interests. There are three components of the Legion: the navigators, the vampires, and the Cleaning Crew who are the human shock troops that kill anything the vampires leave behind. Halliday is a Beastmaster and Roland’s animal wrangler. An Erawan is a god elephant the size of a cruise ship with three heads and tusks that shoot lightning.

State Senator Victor Skolnik is being paid off by Nez. Willis is the governor of the state. Deputies Will Armstrong, Dillard, Chambers, and a forensic mage show up.

This new earth vacillates…
…between magic and tech. A magic flare is a magic wave on steroids that comes every seven years. Roland destroyed Omaha in one of those flares.

The Arcane Covenant had been made up of Louisiana Covens who went up against the White Warlock. A tikbalang is a monster from Philippine nightmares. A skudakumooch is a ghost witch. A Black Banshee kills with its screams. The mrog had once been human. Now they are dogs for the officers who control them. The mean Émile, a.k.a., Weasel, ran the street when Hugh was a child.

The cover is red, black, and white, a split between the White Warlock and her orange castle, lightning flaring in the sky and a curly-headed, longhaired man I’m supposing is meant to be Hugh d’Ambray (it’s so not the image I’ve been carrying around in my head) all in black, a sword at the ready with a rising sun in a roiling red sky behind him. The bottom third of the background is a mélange of orange leaves and red flowers. All the text is white and begins at their knees with the title. Beneath that is a quick info blurb followed by the author’s name at the very bottom.

The title notes the alliance of Iron and Magic, of Hugh d’Ambray and Elara Harper.

4 responses to “Book Review: Iron and Magic by Ilona Andrews”