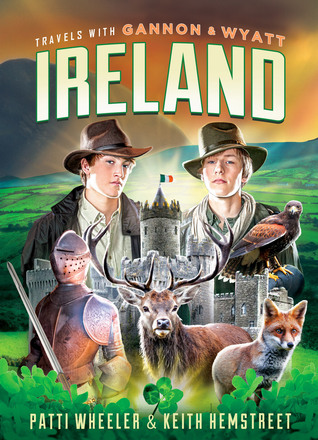 While on vacation in Ireland, Gannon and Wyatt visit medieval castles, climb the Cliffs of Moher, and explore the ancient Newgrange monument. But after Gannon kisses the Blarney Stone their adventure takes a dramatic turn. While volunteering on a farm to connect with their Irish roots, they learn that a deadly blight is wreaking havoc on the Irish farmland. Determined to uncover the true cause, the courageous explorers embark on a secret mission to gather evidence against a ruthless suspect, but soon find themselves running for their lives. Ultimately, they must rely on their wilderness survival skills and Gannon’s “gift of gab” if they hope to bring justice to their ancestral home.

In the tradition of the historic journals kept by explorers such as Lewis and Clark, Dr. David Livingstone, and Captain James Cook comes the adventure series Travels with Gannon and Wyatt. From Africa to the South Pacific, these twin brothers have traveled the world. You never know what they will encounter as they venture into the wild, but one thing is certain wherever Gannon and Wyatt go, adventure is their constant companion.

You can find Gannon and Wyatt’s blog, photographs, and video footage from their real-life expeditions at travelswithgannonandwyatt.com.

It’s another installment in the Travels with Gannon and Wyatt educational adventure series for middle-grade readers and revolving around two kids: Gannon and Wyatt with heart-stopping action. The books can be read in any order.

This ARC was provided by NetGalley and Greenleaf Book Group Press in exchange for an honest review.

“We’re on a quest for the kind of knowledge you can’t get from a textbook.”

It’s ideal reading for middle-grade readers who love adventurous tales while parents will adore the inspirational aspect of doing what’s right. How much better to get in trouble for doing the right thing than getting in trouble simply for the sake of it!

Parents who homeschool their kids may get some ideas from this as well. Actually, it could well give all parents ideas on using travel to help broaden their children’s horizons. And work on their writing skills, lol. Man, kids’ll hate me for saying that! *more laughter*

It’s a great balance of Gannon as the dreamer and Wyatt as the scientific one and provides lots of opportunities for the boys to sling off at each other besides providing different perspectives on the countries they visit and the situations in which they get involved. They’re a lot like most siblings that way, including how they band together to help each other out.

Using O’Leary’s farm is a great idea (most kids like farms), which has just reminded me of the boys spreading, ahem, manure on the fields. Definitely an aspect of the story boys will have fun joking about while the girls will be ewing *grin* I know I did, eww, that is.

Reading this will make you reach for those organic meats!

Learning the language of the country is a great idea too. It’s a terrific way to impress the natives (no, I don’t mean to sound condescending) and get a more in-depth feel for a country. It’s simply that people appreciate one making an effort, even if all you learn is hello, good-bye, and please and thank you. Wheeler/Hemstreet have the boys play tourist as well with the usual attractions such as the Blarney Stone and finding a four-leaf clover, but they also include the Irish parliament and a party. I do love the mention of Irish food — and that full Irish breakfast!

It’s not great reading for adults due to the unrealistic parts. I cannot imagine parents leaving their kids on their own for a month as Mom and Dad do in Ireland. There aren’t even any phone calls or emails checking in on either side. I’d de-emphasize that side of it when or if any parent discusses the story with their kids! You will probably want to discuss Gannon’s inappropriate behavior and talk about different ways and times that would have been better. Then again, Gannon’s interruption does have an effect.

Wheeler/Hemstreet are also heavyhanded with how Moloney and his thugs react. It does speed up events, but I have a hard time imagining a man like him reacting so quickly like this against kids. The quick delivery of threats also seems out of line. I doubt, though that kids will notice this. There are a few more areas that don’t seem in character with the boys; I’ll leave you to find ’em.

It’s pretty impressive that Oscar is able to find the boys. Hmm, why didn’t the boys leap up and tell Mr. O’Leary about the evidence they’ve gathered?

Oh, excuse me! Since when is a father, even if he’s being arrested, not entitled to know where police are taking his daughter?

Of course, the fact that the O’Learys had a whole room devoted to three walls of books has nothing to do with my enjoying this story. Ahem.

I do love this Oscar Wilde quote:

“Experience is the name everyone gives to their mistakes.”

I’ll have to remember that one, lol!

After a tour of Irish points of interest, the family breaks up to pursue their own interests: Dad is naturally off to paint while Mom is volunteering to help and Gannon and Wyatt have chosen (well, Gannon bullied Wyatt into it) to spend a month on a typical Irish farm.

A farm where they’ll find grave injustice and plenty of adventure.

Wyatt is fascinated by “the science of a place: the geology, topography, ecosystem, and climate”. You can see that simply from the headings Wyatt puts on his journal entries with all the details about the weather that day, lol. Gannon is fascinated by “the people, their history, culture, and language”. Dad is off to paint the “forty different shades of green” to be found in Ireland. Mom, a World Airlines flight attendant (it’s why the family can travel so much), is off to volunteer at an orphanage in Dublin.

Martin is the castle butler who’s willing to get Grace, Wyatt, and Gannon inside for a special exhibition and auction of Francis Bacon’s Three Studies of Lucian Freud.

William McGuinness helps Gannon kiss the Blarney Stone. Margaret Sorenson is the buyer of the painting. The Garda are Irish policemen.

The cover is vivid in its oranges and greens of the sunset and Irish hills. The graphic is a montage of events in the story with Wyatt and Gannon behind the castle with its knights in armor where Gannon first confronts Moloney and the red deer and fox they encounter as well.

The title is appropriate as Ireland is the country the boys explore.

Review of Magic Most Wanted