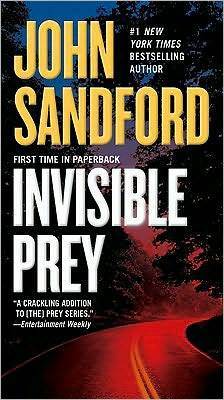 In the richest neighborhood of Minneapolis, two elderly women lie murdered in their home, killed with a pipe, the rooms tossed, only small items stolen. It is clearly the random work of someone looking for money to buy drugs. But as Davenport looks more closely, he begins to wonder whether the items are actually so small and the victims so random-if there might not be some invisible agenda at work here. Gradually, a pattern begins to emerge, and it leads him to . . . certainly nothing he ever expected. Which is too bad, because the killers-and, yes, there is more than one of them-the killers are expecting him. Brilliantly suspenseful, filled with rich characterization and exciting drama, Invisible Prey is further proof that Sandford is in a class of his own.

Seventeenth in the Lucas Davenport series and revolving around a maverick detective determined on justice no matter how or who. It’s based in Minneapolis.

Lucas Davenport is an interesting character. Definitely a complex one. I recently read that Sandford thought of him as a kind of sociopath but that Lucas has mellowed out since. And there is a line early on in the story that makes me think that Sandford is too right. I also suspect it’s part of what makes him such a good cop.

“…he’d be pleased to chase down whoever had done it.
He didn’t have a mission; he had an interest.”

I love that Lucas and the rest of the cops start out thinking that Ronnie is obviously a person of interest until Ronnie shows up. He turns that stereotype right on its head, lol, and Smith wants to turn Ronnie into a cop. Okay, okay, that part of it is funny, but what was done to his aunt and her employer is really nasty.

The forensic investigation into this initial murder is fascinating. It was quite clever of the thieves to camouflage it as they did. They just didn’t reckon with the very bright Ronnie, the more practical-minded Weather, or the granddaughter who thinks outside the box and gives Lucas a hard time. She also puts the pieces in play.

One of the things I love about the Lucas Davenport stories is how real it is. The cops laugh and joke around about the criminals and each other. They rail about the media and the politicians…and their fellow cops. It’s too weird reading about the defending lawyers chatting and socializing with Lucas, making plans for dinner or a benefit together, and then the lawyer gets tough to defend his client. It’s fascinating how they can keep their jobs from interfering with a friendship. Acquaintanceship??

The witnesses and criminals are real as well. Ronnie’s mom keeps talking about how they all say to get a lawyer, and I can “hear” someone saying that. Heck, I could hear me saying that! Meanwhile, Smith thinks about how eager he is to get Ronnie alone so “he’d be able to sweat Ronnie without a lawyer…”

“‘Jesus had no problem with a good time,’ Ronnie said.
‘He turned water into wine, not the other way around.'”

The Widdlers crack me up and horrify me. Jane is so anxious to appear sophisticated and classy while Leslie runs around in his bow ties.

Oh, boy. You’d think politicians would have learned to keep it in their pants by now. Instead, they’re always thinking they’re the ones who won’t get caught. Then there’s the other side of the coin. Momma is more anxious to know how much money she can get and thought the cops would help her put the screws to him. I do have to laugh at her. She started it all off, pimping out her daughter, greedy for money, and then all the hurt that rains down on her.

Jesus, you read the murderers’ thoughts about each other. How willing they are to betray each other. It’s so casual, like ticking off an item on a list.

Huh, interesting antiquity scam that gets explained here. Sandford did a nice job on it. No info dump!

Lol, it’s another good Sandford. It amazes me how wide-ranging his scenarios are, from female assassins to Indian activists to quilt art scams to all those serial killers.

It’s blackmail gone wrong in one case while another set of criminals is indulging all their tastes.

Lucas Davenport is a hard cop with a love for fast cars, Italian suits, French ties, and English shoes — he subscribes to serious men’s fashion magazines! He’s head of BCA’s Office of Regional Research, a troubleshooter for the governor. Dr. Weather Karkinnen is his wife and a plastic and microsurgeon. Sam is their baby son. Letty West — she’s 15 now — is the ward they took on in Naked Prey, 14. Ellen is their housekeeper.

The Office of Regional Research at the Minnesota Bureau of Criminal Apprehension (BCA) is…
…under the purview of Rose Marie Roux, the former Minneapolis chief of police and the current director for the Department of Public Safety. Lucas works under her. Del Capslock is another cop who transferred over with Lucas. He’s got the funniest T-shirts. I wanna know where he gets ’em! Carol is Lucas’ Machiavellian secretary. Sandy is an eager intern. Jenkins and Shrake are some of their agents along with Virgil f**king Flowers who has a side career going as a writer.

McMahon is a BCA investigator. Jerrold/Jerrod from the Highway Patrol gets borrowed to fly the chopper.

The Minneapolis PD
Sloan is Lucas’ best friend, a retired cop, and now the proprietor of a bar, Shooters, for cops and schoolteachers.

St. Paul PD
Harrington is the chief of police. Lieutenant John T. Smith is in charge of investigating the first murder. Ted is one of the medical examiner investigators. Officer Clark Wain and Detective Sy Schuber are part of the initial crime scene investigation. Andy Landis is the SWAT squad commander. Jerry Wilson is investigating the second murder. Jason is involved with Screw’s case.

Jackson County
Larry White has his own problems with a dead girl and a possible suspect in Floyd.

Ruffe Ignace is a rather nasty journalist for the Star-Tribune (Broken Prey, 16) who has a relationship with Lucas.

Karen Palm owns the café. Dan Westchester runs a halfway house. Kidd is a successful artist Lucas called on in Chosen Prey, 12, and he’s got a new baby with Lauren. Archie Carton is a vice president at Sotheby’s. Alice Schirmer is the folk art curator at the Walker. Tricia Bundt is the woman who handled the Armstrong quilt donation. James Wilson was the folk art specialist at the time of the donation. Cannon Associates seems to have been one of the donors; Barbra Cannon was part of it. Billie Walker was the Amon Carter Museum’s curator. Porfiro Quique Ramírez is an illegal immigrant doing lawn maintenance.

Senator Burt Kline is a politician with a very nasty hobby. Burt Jr. is his porky heir. Kathy Barth is the greedy momma; Jesse is the now-sixteen-year-old daughter. James is their lawyer. Kelly McGuire and Mike Sochich are Jesse’s best friends. Screw is Mike’s protective dog.

The victims
Mrs. Sugar-Rayette Peebles works for Mrs. Constance Bucher in Oak Walk. Ronnie Lash is Mrs. Peebles’ nephew, and Aunt Sugar watched him after school until his nurse mom got off work. Weldon Godfrey is a jerk and a neighbor of Ronnie’s. Carol Ann Barker is Mrs. Bucher’s niece.

Claire’s sister is Margaret Booth and her husband is Landford. Amity Anderson was Claire’s secretary, and now she’s working for a foundation. Don Harvey was a boyfriend. Jacob Toms was on a lot of boards including that of the art museum. Duane Child is the man serving time for Toms’ death.

Kathy is Mrs. Bucher’s neighbor and Lucas characterizes her as a “vicious political wolverine”. Shelley Miller is another neighbor. Leslie and Jane Little Widdler are antique experts with a shop; they’re called on by the police to help in the valuations. Carmody and Loan (Melody Loan) are their biggest competition.

Big and Little are the murdering thieves. Fleckstein is their go-between for stolen jewels. Nathan Brown is a small-time guy. Joe Wyzinsky is a criminal lawyer recommended by Laymon Haycraft. Annabelle Ramford does a lot of pro bono work for the homeless.

The cover is lurid with its night sky and the overarching trees shading the neon red road curving off into the distance.

The title, Invisible Prey, could go two ways: unexpected perpetrators who might have escaped or their prey, the seemingly unconnected victims.