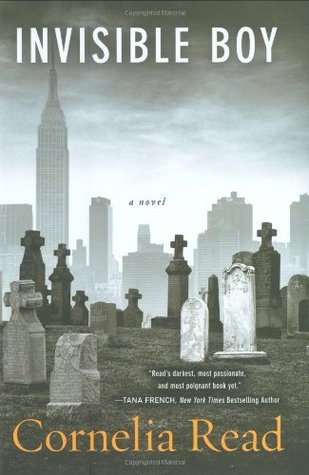 The smart-mouthed but sensitive runaway socialite Madeline Dare is shocked when she discovers the skeleton of a brutalized three-year-old boy in her own weed-ridden family cemetery outside Manhattan. Determined to see that justice is served, she finds herself examining her own troubled personal history, and the sometimes hidden, sometimes all-too-public class and racial warfare that penetrates every level of society in the savage streets of New York City during the early 1990s.

Madeline is aided in her efforts by a colorful assemblage of friends, relatives, and new acquaintances, each one representing a separate strand of the patchwork mosaic city politicians like to brag about. The result is an unforgettable narrative that relates the causes and consequences of a vicious crime to the wider relationships that connect and divide us all.

Who knew? Turns out this is the third installment in the Madeline Dare…um, police procedural? series with this story set in New York City in 1990. I hadn’t realized this was part of a series. To be honest, I can’t imagine why anyone would want to read more about Madeline as I found her whiny and immature. I want to say it’s a mystery, but it’s not. The only mystery was who the boy was and that was quickly determined. It certainly was a no-brainer as to who did it.

My Take
What it is, is a fictional account of a woman at odds with her heritage, a clear view of the class she belongs to without the money to back her being in it, a clear if somewhat idealistic view of the world, and a strong sense of poor-me self. It’s when Madeline finds the skeleton of a little boy, the ribs bashed in, in an old and neglected family cemetery in the middle of New York City that triggers her thoughts on how people treat each other and brings back memories of her childhood. It is a great example of how to avoid the dreaded info dump.

The start is a crack-up and a very dramatic introduction to Madeline’s views on a class of society that is incredibly self-indulgent with an overweening sense of entitlement.

“‘You!’ Poke. ‘Need!’ Poke. ‘To change!” Poke-poke. ‘Your goddamn attitude!’ PokepokePOKEpoke.
…
‘And you … need to change your goddamn medication.'”

There are bits of fun in Invisible Boy, but mostly it’s a descent into the daughters’ resignation about their mother’s attitude and lifestyle choices; their repressed frustration over their parents and the lack of money growing up; their anger and disbelief over the over-entitled class to which they, technically, belong; and, Madeline’s frustration over social services, family stupidity, and the justice system.

It’s also an exploration of liberal versus conservative. It’s funny in some respects and incredibly angry-fying in others. Yes, I made that word up, and it’s how I feel. Christoph and his employees are, ugh, such Neanderthals about anyone outside their class who embrace a different point of view, and they believe women have their place. So condescending.

“‘Jesus, Dean, you married a feminazi?’

Be warned, there’s plenty of swearing in this. Makes me look a piker in the blue language department. And it doesn’t impress me. The language sounds overworked, more like she’s cussing for effect, right along with her family and coworkers. And for all the poor-mouthing she does, Madeline and her friends sure do eat out a lot.

I can’t blame Madeline for her attitude to the rich bitches who obsess about their food intake while popping pills to deal with their boredom. I wanna tell ’em to get a life. Do something meaningful. And yet I don’t see Madeline doing anything meaningful until she discovers Teddy’s skeleton. She’s more concerned about her soap box than reality as Dean points out later in the story.

The numbers about missing people and murders are grim. The truth about who does most of the abuse to children is worse: people not related to the child but who live in the house. Stepfathers and -mothers, boyfriends or girlfriends of the biological parent. Oh, stranger-danger still exists, but it’s minuscule compared to “trusted ones”.

It’s a bit odd that Madeline was so concerned about protecting children even when she was a kid but never knew about what happened to her younger sister. It’s sad that women and children were being abused back when she was a child; it’s sadder still that it still goes on. And for all her protectiveness, she’s clueless and unable to step up to help her friend, Astrid. God knows there were enough signals.

“‘In your non-expert opinion‘

‘Yes sir, in my non-expert opinion. Not least because that foliage had been untouched since the mid-nineteen fifties.’

‘Despite the considerable homeless population known to camp inside the cemetery?’

‘…they seemed to have done a great deal more camping than gardening.'”

I don’t buy the interaction between Maddie and Skwarecki either. I can’t imagine a real cop giving away so much information or allowing so much two-way interaction. As much as I’d love to believe a cop would worry enough to sleep over if I were threatened — especially if he’s cute, ahem — it doesn’t ring true.

“A good marriage is when you know the other person will always make sure you have a place in the lifeboat.”

It’s an interesting tale, even if I can’t stand the main character. I think it’s a real-life perspective on family and living and interacting in New York.

The Story
An interest in her family’s past takes Madeline out to an abandoned family cemetery — in Queens. It’s what she finds in the jungle-like growth that will take Madeline on a journey through the court system as she struggles to find justice for a sweet young boy.

The Characters
Madeline “Bunny” Dare is answering phones at The Catalog, frustrated after having been a staff writer in Syracuse. Dean Dare is her six-foot, five-inch unemployed carpenter-farmboy husband frustrated over the lack of work.

Pagan Ludlam is her younger sister and assistant photo editor at The Catalog and a flatmate along with Sue, a friend from boarding school days. Trace is their half-brother living with his dad in Oahu. Mom, Constance, is “psychocompetitive on the water” and flits from man to man. Michael was one stepfather; Pierce Capwell was another, an abusive bully when the girls were young. He despised Madeline, lucky girl. Larry McCormack, retired from the nuclear energy business, is the latest.

Cate Ludlam is a newfound cousin with her own passion: clearing a long-forgotten family cemetery in Jamaica, a middle-class neighborhood in Queens. Mrs Van Nostrad was one of the searchers with the Quakers.

Astrid “Nutty Buddy” Niro-de-Barile is/was her best friend from their boarding school days. Supposedly she’s from a titled background, but they clicked back then. And had each other’s backs. Antonini is an Italian boyfriend who took off for Europe, so she jumped into marriage with Christoph, her new husband who owns a company in New Jersey that imports machines from Switzerland. Madeline reckons it’s tragic that her friend is “the single most exquisite human being” and brilliant. Vincent Taliaferro is Dean’s boss. Camilla was their snotty fellow boarding school student.

The police
Detective Jayné Skwarecki goes beyond the call of duty and cares. Officer Fergus Albie is the “babysitter” whom I don’t think has been on the job for too long.

Louise Wilson Bost is an assistant district attorney for the Borough of Queens and dresses to the nines. Kyle West, is an old friend from school and a special prosecutor in Special Victims.

Teddy Underhill was three years old the day he died. Angela is Elsie’s great-granddaughter and Teddy’s mother. Albert Williams is the boyfriend. Dougie and Donald are his buddies, and they were raised by Teddy’s great-grandmother, Elsie Underhill. Angela’s mother, Alicia, Elsie’s daughter, was shot to death by her boyfriend, Butchie.

Ms. Keller, an ER nurse, was Angela’s neighbor in Brooklyn; she called in on a line for mandated reporters. Marty Hetzler is Angela’s attorney; Galloway is Albert’s. Judge Malcolm Arthur is presiding over the trial in Queens.

The Catalog is…
…a company that sells books from publishers via telephone (this is pre-Internet days and pre-cellphone!) Yong Sun, Yumiko, Tracy, and Karen are her fellow phone order-takers. Betty is the owner’s ex-wife but retains enough influence to come in and slap ’em all around. I think Granta is part of the organization, but I don’t know what it does.

The Cover
The cover is appropriate with its graveyard of tombstones against a backdrop of the New York skyline. I’m guessing that the overgrown jungle that practically hid the cemetery from view wasn’t tidy enough for the cover. The grays, however, are very appropriate as they suit the tone of this story. One of gloom and a depressive look at family and social services.

The title is about Teddy Underhill, the Invisible Boy while he was alive and in the newspapers after he was dead.