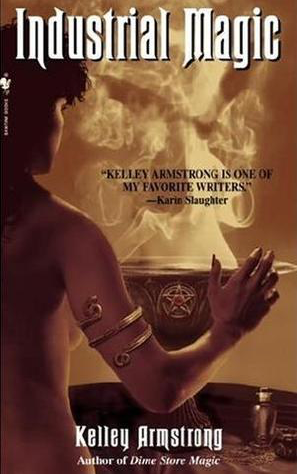 Fourth in the Women of the Otherworld urban fantasy series that flips back and forth between Elena, Clay, and the werewolves under Jeremy and Paige Winterbourne and Lucas Cortez. This story revolves around Paige and Lucas. It takes place in October 2001.

It’s about decency, communication, and caring about others, and one heckuva lot of fun what with all the action pulling in our favorite good-guys like Paige and Lucas; Savannah; Elena, Clayton, and Jeremy; Jaime Vegas (becomes a new favorite); and, Aaron and Cassandra reappear. The action is all over the place as our duo travels all over the U.S., tracking down clues, taking down bad guys, dying…

Of course, family dynamics are always all over the place, and more interesting when they involve greedy, oh-so-superior sorcerers who keep too many secrets and ghosts who worry about their children. Seems there’s more to ghosts than we thought when Paige and Lucas get a firsthand look at what’s on the other side.

Using first-person protagonist point-of-view, we view the story from Paige’s perspective. It’s a practical choice, as Lucas might be too emotional about the murders and his family issues. Fortunately, Paige is pretty much everywhere in the story, so we observe quite a bit.

It’s a useful story as well, as Armstrong combines Paige’s transition into her new coven-less life with a teenaged “daughter” and her unexpected involvement in the terrifying Cabals, even as Jaime joins our merry band of do-gooders…and meets Jeremy.

There are plenty of series arcs, what with Paige’s growing realization about her life’s ambition to be coven leader, Lucas’ family dynamics and estrangement from his father, and that life-style-switching reality of a teenager in the house with empowerment issues.

We also learn more about Lucas’ estrangement, the reality of vampire disconnects, Jaime’s problems with that ghost who can’t communicate, what to do about truly murderous vampires, and on a positive note, Paige and Lucas inspiring Adam into doing more with his life.

We do learn more about why Benicio chose Lucas as his heir rather than his legitimate sons. But Benicio certainly does screw up in his multiple attempts to mend fences with his son. What an idiot.

One sweet example is Lucas’ involvement in the searches that is endearing him to all sorts of unexpected people.

It’s a chance for Benicio to see his son, to meet his woman, and hopefully discover who is murdering teenagers of Cabal employees.

It’s too bad neither Benicio nor the other Cabals can see past their own interests, while Paige and Lucas go up against shamans, demons, and goons on a hunt for an unnatural-born killer.

Paige Winterbourne is a witch who was supposed to be the leader of a coven back East until they threw her out. Now she’s trying to put together a new coven in Portland, Oregon. Her day job is as a web designer. Paige is in love with Lucas Cortez, Benicio’s bastard son and heir, who is a lawyer who works for lost causes. Maria Cortez is his mother. Morris is the temporary Cortez bodyguard assigned to Paige.

Savannah Levine is Paige’s thirteen-year-old charge after events in Dime Store Magic, 3, who still has a crush on Adam. Eve Levine, a notorious dark witch, and Kristoff Nast, a sorcerer, had been Savannah’s parents. Now they’re ghosts working for the Fates.

Adam Vasic is an Exustio demon and best friends with Paige. Robert Vasic, a Tempestras demon and professor whose specialty is demonology, is the stepfather who married Talia, Adam’s human mother.

The Danvers Pack
Elena Michaels is the only female werewolf in existence, which makes her quite “attractive” to every werewolf out there. The fearsome Clayton Danvers is her partner, her lover, and the wolf who turned her, and he has quite the reputation. Their Alpha is the quiet, reserved Jeremy Danvers.

The Interracial Council consists…
…of one to two representatives from each supernatural race, except the Cabals. Arthur is the current necromancer and absolutely useless. Cassandra is the vampire rep. I think Lawrence is another. The Danvers Pack just joined last year.

Aaron, a bricklayer and vampire who wants to be on the council, from Stolen, 2, knows this guy in New Orleans, John, a.k.a., Hans, who has a burr in his side about Cabals and owns a bar, the Rampart, along with Brigid and Ronald. Edward and Natasha are immortality questers with a very nasty hobby. Guess they don’t think being a vampire means they’re immortal. Josie is, supposedly, the stupidest vampire in the world.

Jaime Vegas is a necromancer who puts on highly popular shows that communicate with the audience’s dead. She does have some good stories. Molly O’Casey had been a top-notch necro, and she had been Jaime’s paternal grandmother. Jaime’s mother is still alive, unfortunately. J.D. is Jaime’s production manager. Kat and Tara are part of Jaime’s crew.

…like the Mafia. Once you’re in, you’re unlikely to get out. They see themselves as the magical elite, sorcerers, who look down on all others.

The Cortez Cabal is…
…based in Miami, and Benicio Cortez is the CEO and Lucas’ father. Troy Morgan, a Tempestras demon, and Griffin, a Ferratus who is class C, are his primary bodyguards. Jacob is Griffin’s oldest son. Hector is Lucas’s oldest half-brother, followed by William and Carlos, who is the youngest and most vicious; they all hate Lucas. Delores is Benicio’s hated wife.

There’s a no-shared-events rule regarding Delores and Lucas: “If Lucas attends an event, Delores doesn’t. Not after “Delores tried to poison Lucas at his high school graduation dinner”.

Dennis Malone, former FBI, is the head of the Cortez investigative unit. Gloria, a half-demon, and Erin are shift partners who work with Simon, a shaman, in Cortez Emergency Services. Kyle is a driver. Jared is one of the sorcerers. Reuben Aldrich is head of the actuarial department. Dorinda is a Cortez receptionist. Annette is a stewardess aboard a Cortez plane.

Randy MacArthur, an Exaudio half-demon in sales, is a class C employee; his daughter, Dana, is part demon and part witch thanks to her mother Lyndsay. Gillian is her younger sister. Everett Weber is a druid and computer programmer who had worked a short contract for the Cortezes.

Faye Ashton is a clairvoyant with major issues who used to work for the Cortezes, but now lives in a private-nursing home. Oscar Gale and his wife, Jeanne, are shamans who are the caretakers at the nursing home.

The Saint Cloud Cabal is…
…the second smallest and stingy, with Lionel St Cloud as its head. Stephen is his only son. Matthew Tucker is his personal assistant. Rick is the driver.

The Boyd Cabal is…
…led by Guy Boyd. Tyler is his youngest son. Frank Boyd has several nephews.

The Nast Cabal
Savannah is a Nast through her father. The nasty Thomas Nast is CEO and Savannah’s grandfather. Sean and Bryce are Kristoff’s sons, Savannah’s half-brothers. Joey Nast is another grandson. Their New York headquarters had been in the World Trade Center, until September 11.

Wendy Aiken and her sister Julie are witches, and they aren’t interested. Dr Schwab is Savannah’s orthodontist. Raoul, a shaman, puts out an anti-Cabal newsletter and is a source for Lucas. Elizabeth Báthory is a convenient historical figure for writers. Esus claimed to be a druid deity.

Demons can be…
…split into two categories: eudemon, who can be summoned but won’t interfere on earth, and cacodemons, who can procreate and love to create havoc. Tempestras are storm demons who control the weather; Ferratus can make their skin as hard as iron; and, Exustio are powerful fire demons.

The cover is a range of browns with that toasty background and beige-yellow smoke swirling up from the metal urn atop a brown marble table top. The character with her naked body facing into the background wears a metal armband. The title is at the very top in a modified gothic font while the same color and style are used for the author’s name at the very bottom, just above an informational blurb. A testimonial appears in navy blue in the smoke.

The title is all about the Industrial Magic of the Cabals with their business-like approach to their supernatural lives.