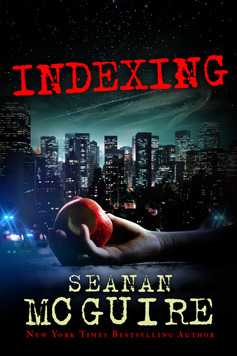 “Never underestimate the power of a good story.”

Good advice...especially when a story can kill you.

For most people, the story of their lives is just that: the accumulation of time, encounters, and actions into a cohesive whole. But for an unfortunate few, that day-to-day existence is affected—perhaps infected is a better word—by memetic incursion: where fairy tale narratives become reality, often with disastrous results.

That's where the ATI Management Bureau steps in, an organization tasked with protecting the world from fairy tales, even while most of their agents are struggling to keep their own fantastic archetypes from taking over their lives. When you're dealing with storybook narratives in the real world, it doesn't matter if you're Snow White, Sleeping Beauty, or the Wicked Queen: no one gets a happily ever after.

Indexing is New York Times bestselling author Seanan McGuire’s new urban fantasy where everything you thought you knew about fairy tales gets turned on its head.

Also by this author: Chimes at Midnight, The Winter Long, The InCryptid Prequels, Pocket Apocalypse, A Red Rose Chain, Reflections, Once Broken Faith, "Dreams and Slumbers", Chaos Choreography, Magic For Nothing, Indigo, Every Heart a Doorway, The Brightest Fell, "Of Things Unknown", Beneath the Sugar Sky, Night and Silence, "Suffer a Sea-change", The Girl in the Green Silk Gown, "The Recitation of the Most Holy and Harrowing Pilgrimage of Mindy and Also Mork", Tricks for Free, That Ain't Witchcraft, "The Measure of a Monster", The Unkindest Tide, "Hope is Swift", Come Tumbling Down, Imaginary Numbers, "Follow the Lady", "The Fixed Stars", "Forbid the Sea", "No Sooner Met", Across the Green Grass Fields

A tale of horror in stories and revolving around Henry Marchen…just know that fairy tales are true.

My Take
A confusing read at the start as it reminded me too closely of Jasper Fforde’s Thursday Next and Nursery Crimes series, however as I got further into the story, it became its own gruesome tale with a strict focus on the fairytale with everything turned around and about: Princes, Mermaids, Sleeping Beauties, shoemakers, Cinderellas, Snow White and Rose Red — not a common fairytale and yet it lent itself quite well to McGuire’s story. Another difference turned out to be McGuire keeping the story in our own world with agents who continually found death to be a positive outcome. Talk about Grimm.

I did enjoy how McGuire integrated an FBI-like investigative atmosphere into it with number codes and characters who struggled to survive the paths their fairy tale narratives wanted them to take. Just ordinary, everyday people caught up in an unbelievable nightmare.

A fascinating dissection of fairy tale parts. In some ways, it’s a look at plot structure and possible twists as the Arne-Thompson Index keeps an agent’s mind open with potential curve balls. The story certainly kept me riveted with all the twists and turns.

The main characters are archetypes: the stoic, the researcher, the personable, and the villain along with the cranky boss. And we get to watch them as they break down in expected ways.

The twist is in all the potential out there in the world for anyone to get pulled into a narrative and how that narrative spins into life. And death.

I do hope McGuire plans on a series.

The Story
It’s a day in the life, until everything starts to go wrong. It’s subtle and takes a few Incursions before Henry and her team realize someone is messing with the narratives.

Once a story starts, it won’t stop on its own.

The Characters
Special Agent Henrietta “Henry” Marchen, a Snow White, has a twin, a Rose Red named Gerry. They were caught up by being born to a Sleeping Beauty.

Henry’s ATI team includes
The vicious, mean Agent Sloane Winters is a Wicked Stepsister on Henry’s team whose story has been averted, and still one Henry must guard against at all times. Apples, you know. Agent Andy is strictly human with an excellent sense about people and a somewhat tolerant husband. Jeff is another agent, but fully actualized in his story, the Elf and the Shoemaker, making him an excellent archivist, and he’s in love with Henry. Agent Demi Santos is very new, a Pied Piper who doesn’t believe.

The ATI Management Bureau defends happily ever after, ensuring that the death toll from a story incursion is kept low. Deputy Director Brewer starts off as the bad guy. Sloane thinks he’s an anchor to the real world.

Birdie Hubbard is a one of the dispatchers who tracks disruptions in the story-verse. Adrianna is a Snow White who died, along with Tanya, Anaye, and others.

The Aarne-Thompson Index is a book codifying the fairy tales, and it is a real book: the Arme Thompson Index to Motifs in Folk Literature.

The Cover
The cover is urban in its background with the night lit city skyline and the deconstructed font for the title and the author’s name. What’s shocking is the extreme close-up of the apple with bites out of it, rolling out of a dead woman’s hand.

The title is very prosaic and dull, but the story does revolve around Indexing the myriad assorted fairy tales of our world.