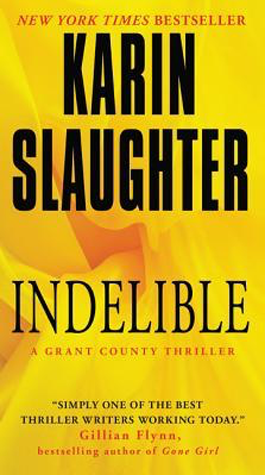 It’s a story about trust and faith…and not judging a book by its cover or a man for the sins of his father — split between fifteen-year-old flashbacks and events taking place today. Although, you certainly can judge a man for his own sins, and Jeffrey has some nerve expecting Sara to cave. I do have to laugh that Jeffrey is tired of being her boy toy, lol. As for the flashback history, hoo-boy, that Sara sure is quick to judge people! Insecure much? And Slaughter did not make me feel that Sara was all that supportive.

In fact, I have a number of niggles about Indelible, from why on god’s green earth would Jeffrey take Sara to his hometown with all that negativity! That mother of his!! As for all the lying…jesus, how can anyone know what’s what, what with no one talking or else telling all those lies.

What was the deal with the necklace? Why was it so important to hide it, if Jeffrey hadn’t given it to her? It’s like he wants to screw up with Sara. And Robert is an idiot. Although I can see why he’d think his fellow cops would be supportive and not what they turned out to be. Then there’s Jeffrey claiming there was one thing Nell refused to do, and yet he has a kid?

In the latter-day part of the story, I do wish Slaughter had made me feel that neither Frank nor Matt wanted to be around Lena. Nor is it fair to expect the reader (me!) to remember why they’re uncomfortable around her. I just found out that I haven’t read A Faint Cold Fear, 3, which could explain that! But then, I didn’t feel any rising concerns from Lena either as she drove through town at the start. Wouldn’t she start to worry? As for why Sara kept putting off the surgery, I don’t get that either.

It’s quite the insightful story with Slaughter using multiple third person point-of-view, mainly from Sara’s and Jeffrey’s perspective, but we do get time with Lena and her worries.

A good half of the story is about Jeff’s childhood and teen years. They sure ain’t Christians! I’m sure glad, too, that I learned about Nell in Kisscut, 2, otherwise I might’ve been hatin’ her. She did crack me up over that breakfast, though *laughing*

There’s a subtheme about gays here as well with a look at prejudices about what gay men can and cannot do. It made me so sick how gays were judged, what was assumed a man would do simply because he was “queer”. All you have to do is look at the story and see how many horrible people were in it who were all “normal”. What’s that say about our “Christian” society?

You know it’s bad when a trailer looks better than the house.

It’s also a semi-funny look at the parent-child bond, as Sara both steams over and appreciates her mother’s interference.

It’s those little things that make all the difference. And that heartfelt “confession” from Jeffrey? Too sweet.

Two armed men enter the police station in tiny Heartsdale, Georgia, and open fire. When the shooting stops, an officer is dead, Police Chief Jeffrey Tolliver is seriously wounded, and the survivors — including a class of grade-school children and medical examiner Sara Linton — are held hostage.

In a tense standoff that could erupt at any moment into more bloodletting — and her ex-husband on the threshold of death — Sara escapes into her memories when their relationship first started and another brutal, shocking crime shattered their small-town world.

Those sins of the past have caught up with Sara and Jeffrey … with a vengeance.

Dr Sara Linton has been the pediatrician and county medical examiner for Grant County for the past fifteen years. Tessa is Sara’s sister, and she works for their father as a plumber. Eddie and Cathy Linton are their parents. Her cousin Hare is gay. Earnshaw is the grandfather who is the wrong generation for women today.

Police Chief Jeffrey “Slick” Tolliver has been her ex-husband for the past four years. He’s ex because he had an eye for the ladies…and it makes Jessie’s remark quite prophetic. May Tolliver is Jeffrey’s alcoholic mother; Jimmy Tolliver was his abusive jailbird father.

The police station in Heartsdale
Detective Lena Adams is the first woman cop in Grant County, and she’s been through a horrible ordeal. The widowed, eighty-some-year-old Marla Simms is the station secretary who’s been teaching Sunday school for decades. Brad Stephens is a young patrolman still tripping over his feet. Detective Frank Wallace is Jeffrey’s second-in-command and ill from food poisoning, as is Detective Matt Hogan. Officers Barry Fordham, Burrows, Robinson, Morgan, Keith Anderson, Sam Smith, Marilyn Edwards, Mike Dugdale, and Detective Pat Morris, who was recently promoted, all work at the station. Officer Hemming is the woman cop ticked off at Lena.

Mac Anders had been the only police officer killed in the line of duty. Ben Walker had been police chief at the time.

The Georgia Bureau of Investigation
Nick Shelton is a field agent who has been wanting to date Sara, but is seeing Molly instead. The cold Dr Amanda Wagner is their chief negotiator.

Molly Stoddard is the nurse from Sara’s pediatric clinic. The too-full-of-herself Maggie Burgess and Ron Carver are some of the schoolkids.

Old Man Burgess runs Burgess Drycleaners. Ethan is Lena’s boyfriend, an ex-con, and a student at the university. Hank is Lena’s uncle with whom she has a new rapport since Kisscut, 2; he owns The Hut, a dilapidated bar where he’s just started up karaoke weekends. Sibyl had been Lena’s twin sister who died (Blindsighted, 1). Nan Thomas had been Sibyl’s lover and is the town librarian. Lena and Sibyl’s dad had been a cop.

“Smith” and his friend are here for vengeance. Jennings was a pedophile.

Jill-June Mallard from the Shop-o-rama has all the dirt. Dr Barney was the man from whom Sara bought the medical practice. Little Jack Chorske has a bad habit of flushing crayons down the toilet. Steve Mann had been president of the chess club in school and dating Sara. Today he owns the hardware store. Mason James was another of Sara’s male friends.

Clayton “Hoss” Hollister is still police chief; it’s because of him that Jeffrey and Robert didn’t turn into criminals. His deputies include Paul and the nasty Reggie Ray (whose uncle Dave was shot in the robbery Jimmy went down for; Marty Ray is Reggie’s dad; and, Paula is the sister who, um, went with Jeffrey a few times).

Deacon White is the funeral director who also does medical examinations. Harold is the intern at the funeral home.

Luke Swan has been in and out of trouble since high school, although he does seem to take good care of his grandmother. His father, Ernest, had been her youngest son. Mrs. Kelley had been one of Jeffrey’s teachers. Dan Phillips, a football player, had run off about the time Julia disappeared.

Julia Kendall’s home life was so bad that she would do anything for even a semblance of love. Her family, the Kendalls, run the fruit stand and should be reported to child services. Lane Kendall is Julia’s mother and a former social worker who is just plain vicious, nasty, and disgusting. Lane claims Eric is her child. Then, anyway. Sonny Kendall is a cousin trapped in Lane’s house.

The cover is a’swirl with softened geometric shapes in a close range of yellows and oranges. The author’s name at the top and the title just below center are in an embossed black. Several info blurbs and the series information is in red with a quote from Gillian Flynn in black. A sawtoothed black circle notifies the reader that a Pretty Girls excerpt is included.

The title is hardly necessary for Sara, for her memories of their early dating life…and the disastrous events…are as Indelible as today’s.