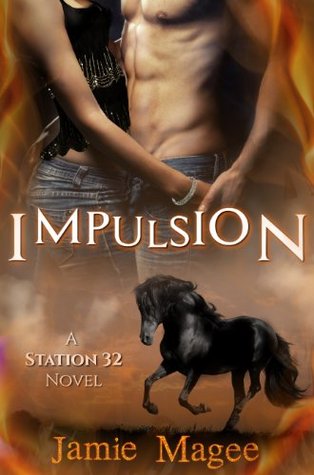 
First in the Station 32 romance series revolving around the Doran family and their friends. The couple focus is on Harley Tatum and Wyatt Doran.

Impulsion is a freebie, and I cannot for the life of me find the email that offered it. And. Sigh. I’ll apologize up front for the massacre waiting below, but it was just so bad…

I had planned on giving this a “1” simply because of the crappy technical side of the writing in this tale of “forbidden” love, but I raised it up to a “2” because it is a good story concept, and one I actually continued to read even though all the technical errors drove me nuts. The characters were terrific. Warm, friendly, supportive.

I do like how well Magee delineated between perspectives as Harley and Wyatt shared a first-person dual protagonist point-of-view.

The Niggles, For They are A’Many

On the story side, Harley’s parents made no sense. Why would her father put up with her mother’s antics? How could he not know what she was doing? How could he allow her to control so much?

Harley herself drove me a bit nuts. Making allowances for her whack job mother, her father certainly gave her enough cues to get a clue. Then again, Harley shouldn’t have had to try and figure out what he was saying. IF her father had actually been paying attention to what Mom was up to. As for all of Harley’s fears about investors falling away, etc. Please. Investors want to make money, and it appears as if Garrison Tatum and Conrad were doing that.

On the technical side. Oh. My. God. It begins with that title [up on Amazon, anyway]: Southern Impulsion: First Love, Second Chance. What the hell? That second half isn’t even on any of the covers. I didn’t think the first half was the series name because that showed up further down the title line inside parentheses. But Impulsion is the only title for the various editions in Goodreads while Southern Impulsion is on the Amazon cover. It’s an excellent example of how careful an author needs be to maintain quality control. Of course that leads to the name of the series. Station 32? Does this mean it’s actually about the firemen? The part that barely featured in the story?

It’s the most visible display of lack of quality control before it descends. Omigod, does it ever descend, and seeing that this story is self-published, I can only speculate that Magee mostly relied upon spellcheck. If any writer wants an example of why you can’t do this, why a writer NEEDS, at minimum, a proofreader (Magee, you need a copyeditor), Southern Impulsion is it. Magee has no clue about commas (yes, that includes vocative case); when to use the possessive versus the plural (your versus you’re, anyone?) — and not JUST those contractions!!; proper word usage (the most glaring of which were finance when Magee obviously meant fiancé and the difference between pass, past, and passed); improper verb agreements; the lack of pronouns, articles, and prepositions (oh, god!!); improper use (or not) of double negatives; when to capitalize and when not; and, on and on.

”It wasn’t ‘old’ as Harley called her families.” Well, maybe a plural families does make sense since she also has fathers and mothers. Kinky.

”She thought to raise much the way you were. In the heart of world.”

“…when you singled. I was trying to see if moms light was off.”

Magee is writing a novel about riding and horses and doesn’t know that the proper word is reins?

If using a first-person POV, you can’t mention that that character “didn’t notice the catch of breath someone in the room took”. Either the character in whose perspective the scene is being written notices it and so it can be written about, or you can’t write about it.

I found myself speculating if English was Magee’s second language. And while I hadn’t bookmarked the truly horribly phrased sentences that forced me to go back and read ’em over and over, I did finally starting marking:

“You asked me to marry my daughter” That is just sick.

“…he mowed down the patch of shaded grass we’d taken refuge.”

“Everyone, this Max, the love of my life.”

“I was dosing off not long.”

“…Collin and been working on…”

“…I know I sure as hell thought she’d come at different than she was.”

“‘Well settled it all up shortly,’ he said…”

The title is confusing, but I’ll go with what Wyatt does that finally helps Harley settle into her riding, that Impulsion.