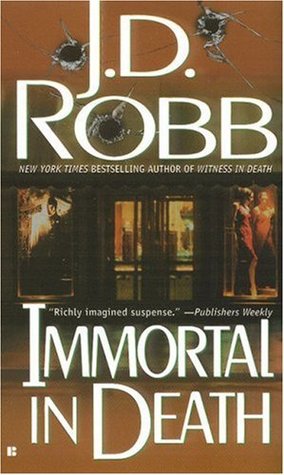 Third in the In Death futuristic romantic suspense series revolving around detective Lieutenant Eve Dallas and her gorgeous husband, Roarke. It’s set in the New York City of 2058.

“Why are you marrying me, Lieutenant?”

“Because you never take no for an answer.”

That sums up Dallas. Any relationship terrifies her and money does not attract her. The coffee now . . . well . . .

Oh, crack me up. Dallas informs Roarke that she’s going wedding dress shopping with Mavis, oh, yes, ROFLMAO. That Dallas, she’s so full of snark, and yet the safety of being with Roarke is opening up Eve’s memories, a horrible place to be. As for Summerset, he’s a contrast in his personal interaction with Eve and his true feelings.

It’s third person global subjective point-of-view from the primary and main characters’ perspectives that clues us in on their thoughts, emotions, and actions. It certainly does make life interesting, lol.

That Pandora . . . Robb certainly knows how to pull you in to a story with her characters. I wanna kill the woman! What was weird was that Robb states Pandora is stupid and then later claims she’s smart. Nah. I haven’t seen any smart, just meanness!

It’s the trip to the fashion designer’s that is the initial conflict and leads to Mavis’ dip into the story events. A scary place for her that showcases Dallas’ loyalty. It also gives her the opportunity to tell Roarke how mag it is that he can keep her in line, *more laughter*.

There are times when it’s too much fun that Dallas is so ignorant of the world in which most of us are interested, especially when she punches “billion-dollar faces”, lol.

Yep, lots of drama with these entertainment types and Mavis’ feelings. Naturally, Roarke’s and Dallas’ relationship is a major component, and in this case, the issues between Whitney and Dallas continue from Whitney’s missteps in Glory in Death, 2.

Ooh, ick, that description of Boomer’s apartment . . . nasty, and I wouldn’t touch it without a HAZMAT suit! But it was a useful search.

Poor Dallas. Crappy car. Crappy computer. And it’s so much fun to listen to her rant and rave at both, lol. Especially now that Peabody is Dallas’ other half, professionally.

I do enjoy Dallas’ interactions with Roarke. How his support is changing her views and bringing peace into her life, the comic frustration his money has on her and her cases, and then Robb provides back history on Summerset and a hideous story about his young daughter and all that guilt Roarke feels about it.

It’s the characters who drive the story and experience plenty of action as they work to solve the murders and interrogate the suspects. It’s a fascinating story with lots of twists, plenty of police procedure and departmental clashes, and romance, entwined with betrayals galore. Dang it, it’s fun to watch Dallas work and trap the bad guys!

Dallas is getting married! Just don’t make her plan it!

Luckily for Eve, one of the most sought-after women in the world is dead, the victim of a brutal murder and Lieutenant Eve Dallas will put her personal life aside and her professional life on the line to take the case when suspicion falls on her best friend, the other woman in the fatal love triangle.

Beneath the facade of glamour, Eve finds that the world of high fashion thrived on an all-consuming passion for youth and fame. One that leads from the runway to the dark underworld of New York City where drugs can fulfill any desire — for a price.

Lieutenant Eve Dallas is the head of Homicide at Cop Central. Roarke is her gorgeous, billionaire boyfriend who likes to stick his fingers into Dallas’ business. Summerset is Roarke’s butler. Marlena had been Summerset’s fourteen-year-old daughter.

Mavis Freestone is Dallas’ outrageous singer friend. Leonardo is a fashion designer and Mavis’ new man. Trina is a beauty stylist while Biff is into fabrics. Lissa is a model for Leonardo. Hugo is the main investor in Leonardo’s show.

Nadine Furst is the top on-air reporter at Channel 75 as well as a friend of Dallas’.

NYPSD
Officer Delia Peabody is keeping track of everything Dallas. Captain Ryan Feeney is in charge of the Electronic Detectives Division (EDD) and is a father figure to Dallas. Commander Jack Whitney is Dallas’ superior. Chief Tibble is in command of the New York Police and Security Department. The hunky Lieutenant Jake T. Casto is in Illegals. Mari Dirscolli and Danny Riley have been partnered with Casto in the past. Dickie Berenski is the chief tech in the lab. Dr Charlotte Mira is a psychiatrist, the chief profiler for the police, and she cares about Eve. Lobar is a crime scene tech, a sweeper. Jonathan Heartly is the prosecuting attorney.

Pandora is a nasty but gorgeous supermodel who can sell anything but can’t act to save her life. Paul Redford is a video producer with Redford Productions where Caesar works reception. Jerry Fitzgerald is a rival model feuding with Pandora. Justin Young is her actor boyfriend.

The Immortal Blossom was grafted in the Eden Colony.

Boomer, a.k.a. Carter Johannsen is one of Dallas’ CIs. Lamont Ro, a.k.a. Cockroach, has a long sheet. Dennis runs the ZigZag Club. Ground Zero is another club. Crack is a colorful bouncer at the Down and Dirty Club, a dive. Hetta Moppett was a part-time dancer and licensed club companion. Immortality is a new drug being whispered about. The Blue Squirrel is a club where Mavis sang until they fired her. The Urban Wars had a huge effect on the world. Dr Engrave is a horticulturalist at Futures Laboratories and Research, a subsidiary of Roarke Industries. Anna-6 is a new droid model. Mark is a florist. Dr Ambrose works at the Midtown Rehabilitation Center for Substance Addition.

The cover has a dark central image of display windows and the glass door of a fashion shop with a brown gradient raying up and down from the image into the warm café au lait background at the top and bottom. Although the three bullet holes in the top take away those warm and fuzzies! The author’s name is at the top, and the title is at the bottom. Immediately above the graphic is an info blurb while immediately below it is a testimonial. All the text is in white.

The title is true enough, for we are all Immortal in Death.