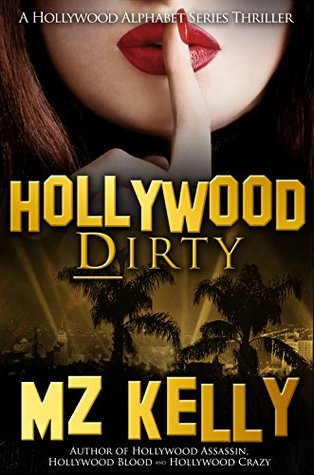 
Fourth in the Hollywood Alphabet thriller series and revolving around LAPD Detective Kate Sexton and her canine partner, Bernie.

Yes. Hollywood Dirty is funny, in a slapstick style that hammers you over the head with a cast of characters that goes way beyond normal. I liked the Douche Brothers until I got further into the story, and then it simply got lame. Although, her roommates turned me off long before the two detectives did.

It drove me nuts that the core cast was so out-of-control with a wimpy Kate. A Kate who keeps “oopsing” with facts she shouldn’t be telling her roommates, and then getting ticked that they blab. Well. Hullo.

Kelly grabs your attention and hangs on, come what may and uses first-person protagonist point-of-view. I also think he’s channeling Darynda Jones, as Nana has named her breasts and Kate named her car.

The first conflict came with Ralston’s dying statement about Jezzie and was followed by a ton of red herrings, which definitely contributed to that sneaky plot twist at the end.

I dunno, maybe I’ve been watching too much CSI and similar shows, but wouldn’t an autopsy have shown up Jezzie’s earlier issues? As for Bernie whining at a crime scene, wasn’t he trained as a police dog?

Kelly includes a number of side plots with a series arc that encompasses the murder of Kate’s father and Jessica’s animosity. Kelly did a nice job of slipping this in. This, along with Jack showing up at the end, could be enough to pull you in, but it’s disjointed and abrupt with the most horrible roommates thrown in just to make it colorful. I’d pass if I were you. It certainly doesn’t help Kelly’s story that he’s got typos all over the place.

Her Vegas vacation gets cut short when Kate is ordered to Bakersfield. And is ferried there by her volatile — and interfering — roommates.

The murder there is a nasty twist in a case already screwed up by the previous team, and the chief only makes it worse when he assigns a reporter to the team.

Kate needs to find the real culprit, get a love life, meet her birth mother for the first time, and survive her assorted roommates.

Detective Kate Sexton rose up from the canine corps with her canine partner, Bernie, to Robbery Homicide. She calls her car Olive. After being wiped out in her divorce from Doug Witherspoon, an assistant DA, Kate has some, different, roommates: Natalie Bump is British and too hot for words, and Mo Simpson is a former pimp (female). Mo and Natalie have started a private detective business, Sistah Snoop. Tex is Natalie’s nerdy, brainy boyfriend. Chica Loca is Tex’s concoction and has brought Nana “back to life”.

Robin is Kate’s brother who works at a hair salon owned by Barry Sinclair. Maya is a new stylist there. Kate’s father, a cop who was gunned down in a park when Kate was a toddler, married her adoptive mother, Miss Daisy, a free spirit, part-time psychic, new-age guru, and artist. Shumi Duvall claims to be a spiritualist.

Kate’s landlady, Nana Hannah, is a very free-spirited eighty-three-year-old who is sexually obsessed. Prissy, her great-grandson, is a transvestite who owns a sex paraphernalia shop, Voodoo Mama. The clinically depressed Hubert legally changed his name to Elvis. Alice is a friend of Nana’s.

The LAPD
The red-mustached Detective Charlie Winkler is Kate’s partner. Detectives Kyle Gooch and Eric Glade are partnered up and referred to as the “Douche Brothers”. Detectives Jessica Barlow (Kate’s enemy) and Barry Liebowitz botched it. Lieutenant Henry “Henrietta” Edna is their immediate boss. Captain Decker is in command of their stationhouse. Brie Henner is in the coroner’s office and is a friend of Kate’s. Chief Bradley East, a.k.a., “Beast”, is new and eager to suck up to the press. Retired Detective Pearl Kramer works cases part-time for the LAPD. John Duncan works in Cold Case. Muriel Shafter is in Media Relations (MRS). Rob Nelson is in command at MRS. Chewie Smith is in Vice.

Detective Jack Bautista dated Kate until he took a job with Homeland Security. Wilma is Charlie’s “cheating” girlfriend. Irma is Charlie’s sixteen-year-old daughter. Cleo is Irma’s boyfriend going to The Ink Palace, a tattoo school. Joe is Brie’s firefighter husband, and they have a six-year-old daughter, Lily. Barbara is the Kramers’ autistic daughter who became a success. Herb Benson is Jessica’s lawyer.

Jezzie “Black Lightning” Rose was an Olympic gold medalist. Al and Flo Rose are Jezzie’s parents. Bix is Jezzie’s younger brother. Barry Ralston had been Jezzie’s boyfriend. Terry Gibson is a model and had lived with Jezzie. Sandra Weimer had been Jezzie’s best friend on the squad. A former football player, Chucky “Hannibal” Wilson was her sports agent; he’s got some odd kinks. Ray Dunbar, a professional ball player, had been one of Wilson’s clients.

Westbridge University was…
…founded by Ben Rawlings and famous for its athletes of whom Jezzie was one. Walter Stanwich is the president. Marissa is a student guide. Shane Mumford had been the trainer and personal coach assigned to Jezzie. Tom Baylor is the athletic director.

Natalie and Mo will be teaching a class called “Sex and Relationships”. Some of their speakers will include Kate and the Russian Dr. Ludmilla Pushkin, who is a founder of Cerebral Humanoid Autonomic Orgasmic Stimulation (CHAOS) theory. Mr. Johnson is a sex doll.

Mack McKenzie is a private investigator and former Navy SEAL who primarily works high-profile kidnappings. Thelma is Mack’s black Lab who just had Bernie’s puppies, Betty and Bubba. His wife had been the victim of a drunk driver. Piper is Mack’s housekeeper.

Joanie Hutchins is a secretary at Northridge Studios. John Felton did makeup there. Spanx is a receptionist.

Las Vegas
Ace is an old boyfriend of Nana’s who lives in Las Vegas. Judie Crawford, a one-time actress, has turned out to be Kate’s birth mother who had never married her father. Ryan Cooper had been Judie’s boyfriend who later married her. Peggy works at St. Clair’s Convalescent Hospital. Janet Larsen is the administrator.

Bakersfield
Detective Good caught the murder case. Bruce Badenov is a clerk at the Snow White Motel in Bakersfield as well as the mayor of Oildale. Bruce’s aunt and uncle, Gladys and Earl, built the motel. Tyson Gray was thought to be Ralston’s dealer. Latisha Hill had been seeing Barry and Gray.

Phyllis the Squealer is/was Doug’s secretary. Earl Conners was a muscle-bound steroid user from a previous case. Xandiva, a drug to enhance sexual desire in post-menopausal women, is part of a drug study. Judge Loretta “Catherine” Johnson, the presiding judge of the superior court, has some odd kinks. Brian Hamlin is a yoga instructor. Dr. Carly Nichols is Brian’s half-sister and works at NADA. Cindy Burch used to be an assistant at Brian’s yoga classes.

Newt Babich is a victim at Club Z. Juanita Ramirez had been in food service with Moonlight Delights. Lydia Sanchez was Juanita ’s mother. Jeremy Shulman has a record and was acting as Wilson’s enforcer. Ray Broome is a foreman at Taylor Sheet Metal. Monroe’s Gym is managed by Avery Chilton where Andy Ceil is a trainer; Madison also works there. Angie Johnson and Gladys are from the Hook-Up-Happy dating service. Monoythroprotein (MTP) is a performance enhancing drug. Porsha is the star of Dirty Girls from Mars. SkyWyre is a dark web site where Que hooks up with potential clients.

The cover is split between a closeup of a woman’s chin, her red lipsticked lips pursed with a red-polished finger held up to insure your silence in the top above the title in a horizontal, lightly gradated yellow sans serif and serif. Below the title is the yellows, browns, and blacks of Hollywood with its palm trees and searchlights scanning the sky. The author’s name is at the bottom in a more gradated yellow sans serif beneath which is a listing of the three previous titles in white.

The title provides the geographical location of the story as well as its position in the series, for it’s Hollywood Dirty secrets about to be revealed.

One response to “Book Review: Hollywood Dirty by M.Z. Kelly”