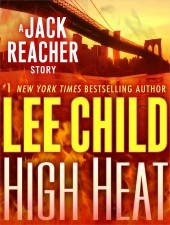 July 1977. Jack Reacher is almost seventeen, and he stops in New York City on the way to visit his brother at West Point. The summer heat is suffocating, the city is bankrupt, and the mad gunman known as Son of Sam is still on the loose. Reacher meets a woman with a problem, and agrees to help her . . . but then the power grid fails and the lights go out, plunging the lawless city into chaos. What does a visiting teenager do in the dark? If that visiting teenager is Jack Reacher, the answer is plenty.

Also by this author: Personal, Make Me, "Small Wars", Night School, MatchUp, The Midnight Line, Past Tense, No Middle Name, The Hero, Blue Moon, "Cleaning the Gold", The Sentinel

One of the short stories, it’s technically 17.5 in the publication line-up, and I’m slotting it into the 0.2 chronological line-up in the Jack Reacher suspense series. This particular story is about Reacher when he’s 16 in 1977.

My Take
It was the kid that was my first tip-off, and it seems Reacher has been the man we all know for years, even in 1977. Even at 16, he calculates the angles, the fight possibilities, and he is using that brain of his. It’s brilliant!

Child easily makes you nervous for Reacher when he’s standing in that coffee shop doorway and thinking about his current sexual experience. When it comes to the scene in Chrissie’s car, I couldn’t figure out if I would die of fear or crack up laughing as I read Reacher’s assessment of events as he enjoyed “going to heaven”, LOL.

Child does beautifully in integrating the events of that summer in 1977 into his story, including that reference to the Son of Sam killing spree; wait’ll you read Reacher’s analysis, spot on in seconds. Makes you wish there were a lot more real Reachers in the world.

It’s classic Reacher; you’ll love it as he saves a job and the day. Although, that finish was so not what I was expecting. I still have to read it over and over, and I still can’t believe it.

“Winning ain’t enough. The other guy has to know he lost.”

The Story
Just off the bus from…South Korea…Reacher easily finds trouble when he rescues what he believes is a lady.

Only the mobster he stops wants to get back at Reacher. Lucky for that blackout, at just the right moment.

The Characters
Jack Reacher is a few months shy of his seventeenth birthday, and he’s kicking up his heels with a trip to New York City. And we know the drifting started long before he quit the army. Cadet Joe Reacher is his brother and at West Point.

Jill Hemingway appears to be a damsel in distress in so many ways.

Chrissie is one of the Sarah Lawrence coeds Reacher meets, who’s willing to go hear some music.

Croselli is a made man who is extremely annoyed.

The Cover
The cover is the flaming in oranges, reds, and yellows with the Brooklyn Bridge above and the New York City skyline in the background, simmering with heat.

The title is that High Heat summer of 1977 in New York City with blackouts and high temperatures of all sorts.