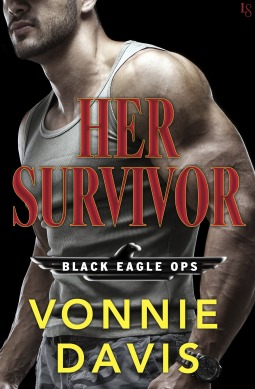 
First in the Black Eagle Ops contemporary romance series and revolving around a group of ex-SEALs recovering from PTSD and based in Warrior Falls, Texas. The couple focus is on Kelcee Todd and Dustin Franks.

This ARC was sent to me by NetGalley and Loveswept (ages ago) for an honest review, and I suspect they’d prefer I’d never read it.

It took awhile before I found this again — it wasn’t a Kindle, and I forgot that there was anywhere else for an eBook to live other than Kindle. Eeek.

Davis’ primary purpose in writing this is to explore PTSD and how it affects the survivor as well as those around them. She did an amazing job of bringing those effects alive, as well as incorporating suggestions on coping with it into the story. I also appreciate Davis’ support for bigger women. It’s the work Davis has done in incorporating the PTSD that brought it up to a “2”.

Davis’ premise was great: ZQ’s inviting his old teammates suffering from PTSD and/or recovering from wounds to recuperate on his ranch. And he sure is a conniving matchmaker, lol. Those colorful characters Davis created are over the top in some cases — that dog and her bibs, lol — and small town life is always an enticing and cozy read. And yet…

Yes, a big yet. There were so many issues with this, starting with the writing, which was terrible. There was so much tell, very poorly handled info dumping that wasn’t helped by the giant leaps in story and dialogue Davis kept tossing in. Let alone ignoring the basic rule about paragraphs — one issue per paragraph, please!! — Davis is throwing in a number of topics without connecting them. Well, actually, I’m guessing that Davis filled in a few words on her story outline and called it good. That or she was so impatient to get to the end, that she couldn’t be bothered with doing any buildup and figured shove it in any ol’ way.

“‘Also sent one to Reece.” He chuckled. ‘Or Steelhead, as you guys called him.'” (Wouldn’t his fellow teammates know he was called “Steelhead”?)

“‘After Stoney got killed, a translator was requisitioned for our unit ASAP.” (Yep, and I’m sure the fellow team member he’s speaking to knew that as well. And, yes, it goes on in that conversation with more that they both know.)

JJ’s tale about his grandmother…sweet, but wouldn’t the guys have known all this?

ZQ’s speech about Mom going to visit a sick friend…

Why is Dustin telling her about the two horses almost ready to foal? How does it even fit in?

This story was a litany of missed moments for tension, drama, and mystery. The overall series “secret” could have been developed and increased the mystery and drama. The tantrum in the wrong place over that kiss in the parking lot was a sorry excuse for avoiding some hard work. And I know tropes — the age-old trope of I-can’t-stay-with-the-person-I-love…so’s-I-can-protect-her — can be tricky to twist and make interesting. And not working it isn’t a good excuse. Kelcee’s need for secrecy was so surface and barely touched at that. Why wouldn’t that hit-and-run start revving up Kelcee’s fears? Instead she tosses it off. How is it that a bunch of Navy SEALs, supposedly accustomed to protecting AND clearing a house, not think about that front door?

Davis veers from one end of the emotional spectrum to the next with no build-up or letdown.

What is with this sudden swing in the conversation…

“… We’ve got some serious plans to make to save your precious life. By the way, I like your haircut.”

Kelcee’s anger with “frog face” is reasonable, but why would it have been okay for him to say these things if she’d had some food in her system? Davis just pops out the secret ops deal that ZQ is working on. No buildup. No mystery. And I’m feeling like ol’ Jim is a loose thread.

How does a population of 6,000 support a bookstore and an architect? ZQ’s ranch has 22,000 acres and a few hundred head of cattle and some Longhorns, employing five hands?These economics aren’t adding up for me.

Those too-fast blow-ups between Kelcee and Dustin…and I ain’t even gonna go there about their weird insta-love. And what’s with all this so-fast kissing and groping? It doesn’t seem in character for Kelcee and barely for Dustin. No, I’m sorry, I ain’t feelin’ it. This entire read has been all surface, and I haven’t been pulled in.

It’s a wanna-be version of Sherrilyn Kenyon’s Tempting SEALs and Elite Ops. If you want a read that is full of drama and tension, go with Kenyon. Although, it will NOT be cozy.

Navy SEAL Dustin Franks can handle the physical pain — he’s rarin’ to get back on the ground with his buddies; it’s the PTSD, the memories, that are killing him. Then the opportunity comes to recover amongst others like him. Teammates also suffering from PTSD. Men who will understand when he loses it.

Never does he expect to find a woman who can also understand.

Kelcee Todd has just inherited Frank’s bookstore, Bookstore by the Falls. Marmalade and Sox are her new kittens. Frank Brandt is the man who took Kelcee on when she arrived in town.

Dustin Franks is recovering from the loss of his leg and extensive damage on the left side of his body, but is determined to pass the physical and return to his SEAL team. He has a degree as an architect. Hailey is his ex-wife. Linda Franks is Dustin’s mother.

SEAL Team 5
Now-ex Commander Zane “ZQ” Quinlan has retired and owns Eagle Ridge Ranch. Jerryl “JJ” Jacoby handles the team’s service dog, a German shepherd named Ordinance “Nance“. Ashley had been their translator and is suffering her own horrendous traumas. Scratch is moving his family over. Kent Wysocki had been one of Dustin’s team. Davis is setting us up for future characters: Reece “Steelhead”, Roland Cudo, Titan, and Ghost.

Eagle Ridge Ranch is…
…ZQ’s family ranch. June “Junebug” is his widowed mother. Austin had been his dad. Elroy is the foreman; Alonzo, Bill, and Cookie are ranch hands. Zeus, Blackie, and Admiral are three of the horses.

Warrior Falls is…
…a small town of 6,000 people. Noah Sterling is a lawyer. Owen Pahl and Clint Silver (a U.S. Marshal and former Ranger married to Fran, quite the colorful and frank wife) were Frank’s particular friends. Fran has an Aunt Delia. Shelby Johnson is remembered in Frank’s will. Bo is Shelby’s abusive husband. Clarice and Suzanne are a couple. Jim Dobbins is a major jerk married to Chloe; they have twin boys. Megan Silverstone is a teen who works as a ticket taker at the movie theater. Mark (owns the local feed store and lumberyard) and Nina (she runs the beauty shop) McGrath have a son, Dustin, who learns his lesson. Linda Cobbs is teaching her daughter, Olivia, poor image skills. Patty Fleming. Phoebe works at Lacie’s dress shop. Jesse Martin is a teen boy who thinks fast. Widow Peterson. Ennis works for Mark. Wanda Brandt is Frank’s bitchy, self-centered daughter. Involved with ZQ?!?

Gina Wilson, a former Marine, will take over as physical therapist at the ranch. Dr. Raymond counsels patients suffering from PTSD.

The Russian mafia includes…
…the Bashmakov and Morozov Circle. Adrik Vlaslov and Dimitri are part of the Circle.

Katrina Talamo is on the run from Tony, her murderous brother. Sophia is her younger sister.

The cover has a dark background, reflecting the pain of Dustin’s PTSD, and it’s a shadowed Dustin on the cover, his very ripped torso covered in a ribbed tank top. The title is practically centered just above “the fold” and in a red font outlined in yellow, a yellow repeated in the author’s name at the bottom. The black eagle graphic provides the background for the white of the series information.

The title is all about Her Survivor, for that’s who Dustin is.

4 responses to “Book Review: Her Survivor by Vonnie Davis”