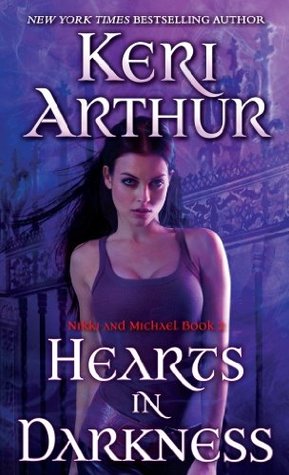 Private Investigator Nikki James has a lot to contend with. Her lover, Michael Kelly, walked out without so much as a goodbye, and what seemed like a simple case of stopping a runaway teen brought her face-to-face with another clutch of deadly vampires. But if that seemed bad, it is about to get a lot worse, because when Michael returns, it is not for her, but for the case.

Wealthy men are starting to vanish from a resort in Jackson Hole—which is exactly where Nikki’s runaway teen seems to be as well. Something nefarious is going on at the luxury spa, but what? The last thing Michael needs is a confrontation with Nikki—especially when his control over his bloodlust is still so tenuous. But posing as a newlywed couple at the swanky resort may be the best way for both of them to solve their respective cases. This time, Nikki is determined to make Michael see that life apart is worse than death. Yet before she can make him see the light, a specter from Michael’s past rises that could destroy any hope she has of a future with him. Because this time the threat isn’t physical. It’s a matter of the heart.

Second in the Nikki & Michael urban fantasy series and revolving around a powerful psychic and a vampire at odds with each other and themselves. Based in Lyndhurst but the action takes place in Jackson Hole. It’s been six months since Dancing with the Devil, 1.

It is better than Dancing with the Devil, but the tropes Arthur drags into this made me roll my eyes. I wish I got as much exercise as my eyes seem to! The I-love-you-but-aren’t-good-enough trope always makes me so nuts, and Arthur doesn’t help it at all when she forces Nikki into being determined-to-force-him-to-acknowledge-their-love. Yeah, ’cause it’s so much easier to be miserable. And both their lives are on the line whether they’re together or apart, so???

I think Seline — powerful with a heart — is playing matchmaker in the so-very-obvious ploy of forcing Michael to join up — as a couple — with Nikki in their undercover roles. I both like and am annoyed by Nikki. I love that she stands up for herself, and yet she insists on running into situations she’d be smarter to avoid. I know, I know, it’s what makes a story dramatic, but other writers manage to avoid the lame aspects of this trope, so I end up expecting a writer to work a bit harder. Mmmm, that sounds mean. And it’s not like I have to do the work…

That said, Arthur does make me feel for the victims, especially young Matthew and Rachel. They don’t deserve this. One has a horrible set of parents while the other has family that cares but probably feels apart due to being gay. There is a nice bit of drama to this, although it could have had a greater depth of tension.

There’s an interesting twist to this with a new species of supernatural I’ve never read of before. Those flame imps are a treat and have both a sci-fi feel to them — they make me think of the original Star Trek — and a poetic attitude toward life. One that will break your heart. And it will prove that consideration for others will always prove to be the best choice. Another twist is how the flame imps and other beings are combined and the ultimate consequences with all the tension pulled in by Arthur. Whew.

We do get some back history on Michael in both his human and vampire states. More back “history” brings up the family abuse and continues to make me wish parents had to be licensed before they could have babies.

It’s also a case of crime-doesn’t-pay, as Cordell found out. Seems life doesn’t pay either when rich men are involved. And I do not understand why Parnell “needs an alibi”. I suspect a poor choice of phrasing.

Life has never been so insane for Nikki James. There’s another teenager missing. She has another vampire to contend with. Her partner and best friend Jake is in the hospital dying. And a madman is kidnapping the wealthy.

Just when it seems nothing else could possibly go wrong, Michael returns — but not for her. This time, however, Nikki has no intention of running from either the case or from what still lies between her and Michael. And she isn’t going to let him run, either.

The last thing Michael Kelly needs is a confrontation with Nikki — especially when his control over his bloodlust is still so tenuous. But when a kidnapper steps up his agenda to murder, he’s forced into a partnership with Nikki to keep her safe.

After events in Dancing with the Devil, the life of Nikki James, an orphan with psychometric and kinetic abilities, has been linked to the vampire who broke her heart. Jake Morgan is her best friend and her boss. Mary is his worried wife.

The 300-plus-year-old Michael Kelly is a psychic vampire who was ordered to guard Nikki by his own boss, Seline, a psychic witch and Michael’s supervisor at the Damask Circle, an organization that hunts down supernatural evil. Doyle is a pilot for the Circle. The 800-year-old Elizabeth is the vampire who made Michael.

Detective Col MacEwan is a cop with a bit more sympathy for Nikki’s involvement. He has an 18-year-old niece, Rachel; Sondra is her mother.

Matthew Kincaid is a genius computer nerd tired of being ignored. Mrs. Kincaid is his worried mother. Vance Hutton is a wealthy industrialist. Lucas Rodeman is another wealthy newlywed with his wife, “Ginger“. Michelle Hannerman, Frances Baker, and Mary Gordon have also gone missing.

Randolf Cordell is a vampire paraplegic who works as the resort’s manager. William Parnell, Robert Carson, and two others gave Parnell an alibi. Ladonna was an old witch working a fairground circuit. Jacinta is a masseuse at the resort. Lizzie is the vampire who seduced Matthew.

Flame imps are tied to the land and can inhabit the bodies of others, control them. Trevgard is a former client of Jake and Nikki’s. Jasper Harding was the psychopathic snake of a vampire-animator in Dancing with the Devil. Tommy had been her first lover and the leader of the gang who knew a good thing when he seduced it. Wraith are devil spawn.

The cover is purples with a sexy Nikki (wearing a cleavage-enhancing deep purple tank top) facing us, her long black hair blowing in the breeze against a backdrop of an elaborate wrought iron fence.

The title is all about the bad ones, their Hearts in Darkness, that destroy so many lives.

3 responses to “Book Review: Hearts in Darkness by Keri Arthur”