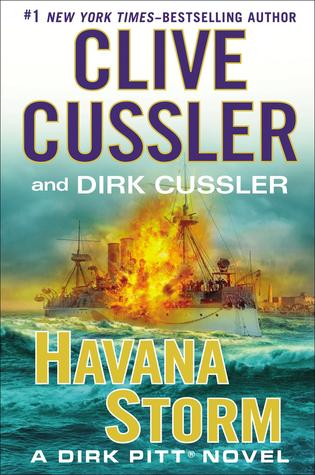 Twenty-third in the Dirk Pitt action thriller series and revolving around Dirk and his children and their fascination with under the seas. This story is set in the Caribbean around Cuba and Jamaica and begins in 1898 before slipping into 2016.

At last. The truth behind the sinking of the U.S.S. Maine, *grin* I do enjoy it when a writer incorporates a bit of history into his or her story.

I also enjoy learning, and the Cusslers incorporate Mexico’s past history from the Nahuatl (Aztecs) to Mexico City’s evolution. Then they include an inspiration from Indiana Jones with what happened to the secret of the treasure. And it’s a reason that makes me shake my head with a that figures. Very Indiana Jones-ish…sigh…

It’s a story of good vs evil, including all the subplots, with a regard for history that I love. Point-of-view-wise, Havana Storm uses third-person omniscient with a few scenes of the author surrogate in Cussler’s usual insertion of himself as an unexpected bit of aid.

It’s also rather annoying that Cussler continues to info dump, although it’s not as bad as some of the stories. I’m also curious as to why the crews of NUMA vessels don’t receive defense training. Considering how often they get boarded or overrun, I’d think they’d be more concerned about protection.

That said, it’s predictable and exciting, thrilling, a ride with more ups and downs than you can imagine…or imagine surviving, lol.

Greed. Greed for money. Greed for power is threatening the environmental health of the Caribbean and the Eastern Seaboard, a disaster that piques NUMA’s attention and concern.

Besides the toxic outbreak near Jamaica, Dirk, Jr., and Summer Pitt have fallen into their own adventure, chasing down an Aztec stone with clues to the location of a treasure, one that ties into the Maine blowing up, setting off the Spanish-American War.

An adventure that will bring all three Pitts to Cuba with little hope of survival.

Dirk Pitt, Sr., is the current head of NUMA. Loren is his wife and a congresswoman from Colorado. She serves on the House Subcommittee on the Environment. Al Giordino is his best friend since childhood and currently in charge of the Underwater Technology division. He’s currently testing the Creepy Crawler, a mechanical crab. Summer, an oceanographer, and Dirk Pitt, Jr., a marine engineer, are twins and Dirk’s children.

…the National Underwater and Marine Agency, a federal organization concerned with caring for the seas that employs oceanographers, marine biologists, and geologists. Its former director is now the Vice-President of the United States, Admiral James Sandecker. Rudi Gunn is an ex-Navy commander who is the current deputy director. Hiram Yaeger is head of computer resources. Dr. McCammon is a geologist.

The R/V Sargasso Sea is…
…a NUMA research vessel captained by Malcomb Smith. Barnes is the first officer; Dyer was the assistant engineer. Dr. Kamala Bhatt is the marine biologist. The Starfish is a submersible. Ross is one of the helmsmen.

The Caroline is…
…a NUMA ship captained by Bill Stenseth. It’s boarded by Rudi with his friends, Jack Dahlgren and Pierce Russell. The Bullet is a submersible she carries.

St. Julien Perlmutter is a world-renowned maritime historian and gourmet. Admiral Raphael Semmes is his cat. Martha is the chief military records archivist at the National Archives.

Captain Haasis is in command of the U.S. submarine, Asheville, with orders to sink a ship. Parker is the officer of the deck. The Oregon just happens to be on hand. Admiral Stewart is a Joint Task Force Commander. Commander Harold Joyce is the base historian.

Mexico
Dr. Eduardo Madero is an anthropology professor from the University of Veracruz. Professor Miguel Torres is an expert in Nahuatl.

Cuba
They’ve just had Fidel “El Caballo” Castro Ruz‘s funeral. His brother, Raúl Castro, has been president of Cuba since 2008. Alphonse Ortiz is a Cuban vice-president on the Council of State. Roberto is his driver. Escobar is the Agriculture Minister. Minister Ruiz serves as foreign minister.

General Alberto Gutier, Minister of the Interior, has aspirations to be president. Commandante Juan Díaz is his brother interested in archeology and with the Cuban Interior Ministry.

Maria, an artist who simply stopped, and Salvador Fariñas have a strong sense of what’s right. Jorge Castaneda is a murderer serving time in Boniato Prison.

Bruin Mining and Exploration is…
…an ecologically responsible mining company. Supposedly. The company belongs to Mark Ramsey, a wealthy Canadian industrialist. He also likes to race his 1928 Bugatti. His yacht is the Gold Digger.

The Alta is a Norwegian drill ship owned by Bruin Mining and Exploration, exploring for oil and captained by Kevin Knight. Gordon is his executive officer. Warren “Pops” Fletcher and Will “Brownie” Brown are the divers; Tank is the bellman in the mining bell.

The Sea Raker is an undersea mining ship that belongs to Bruin. Commander Calzado is a Cuban army officer aboard the ship. Lieutenant Silvio Molina is in charge of the docks.

Jamaica
Uncle Desmond and his nephew are out on their fishing boat, the Javina. Samuel is a fisherman with a mission. Clive, a.k.a., “Pops”, is both curator of the Green Stone Museum and Bar and its bartender. Mabel’s serves good seafood.

James Maguire, ex-Marine Corps sniper and CIA field operative, and Marty Gomez, an ex-SEAL, are mercenaries aboard the Surprise.

Dr. Ellsworth Boyd is with Yale University. Roy Burns is a colleague and friend. Martin was the lead diver.

Weylerites are an extremist faction loyal to the Spanish governor, Valeriano Weyler.

The U.S.S. Maine is a haven in Havana. Lieutenant Holman. Charles Sigsbee is the captain. General Fitzhugh Lee is the consul general of Cuba. Dr. Ralph Bennett is with the U.S. Naval Hospital in Brooklyn and performed the autopsy.

Dr. Julio Rodriguez is a Spanish archeologist without morals who escaped on the San Antonio.

Eagle Warriors, cuāuhtmeh, were an elite group of skilled veteran soldiers as were the Jaugar Warriors. Huapalcalco was an important Toltec city. Tenochtitlan, which is now the heart of Mexico City, was besieged by Cortés. Huitzilopochtli is an ancestral deity, war god, and the Aztec’s founding father. Quetzalcoatl is a Toltec leader who lived centuries earlier. Motecuhzoma, a.k.a., Montezuma or Moctezuma, led the Aztecs when the Spaniards arrived.

The cover is a detailed gradient of deep blue up through the palest of blues at the top with an orange explosion blazing up at the stern of the foremost ship with another ship in the background of the heaving seas. In the background is a profile of Havana. The primary author’s name is in an embossed, gold-outlined navy with the secondary author’s name in white below it. The title is in an embossed, white-outlined gold at the bottom with the series information in white beneath it.

The title is, at the core, a Havana Storm that revolves around Cuban politics.