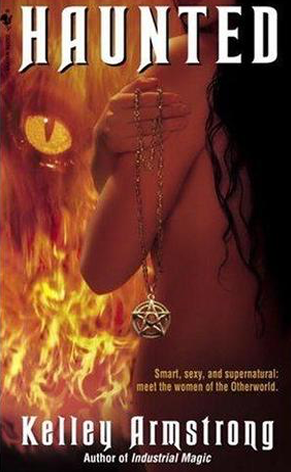 Haunted by Kelley Armstrong
Series: Women of the Otherworld #5
Genres: Urban Fantasy
Published by Bantam on May 31, 2005
Pages: 528
Format: eBook
Source: the library

Fifth in the Women of the Otherworld urban fantasy series and revolving around the women in this world. The focus in Haunted is on Eve Levine, Savannah’s mum.

Eve and Kristof (Savannah’s parents), who just happen to be ghosts, are the main characters in this story where Eve learns quite a bit about her failings just as we learn about the inner Eve.Then there’s that angle on demons with a dip into the activities of demi-demons, a different take on the hierarchy and origin of angels, and the role played by the Fates.

We do get a firsthand tour of the afterlife, well, for supernatural ghosties, anyway, through the firsthand first-person protagonist point-of-view from Eve’s perspective. And she’s quite the dominant woman with a very realistic view about life. Armstrong’s having offed her provides quite a unique perspective on strong women *grin* who have no issues with getting down and dirty, lol. In fact, Eve has quite a few interesting angles in Haunted *more laughter* Wait’ll you read up on her partnership with Jaime!

Armstrong has been dropping clues to Savannah’s, or rather to her mother’s past, and now Armstrong finally clues us in as to why Eve got better acquainted with Kristof. She also includes a twist with that “home” reversal that shows up Eve’s sentimental side…and quite the believable proof that Kristof wasn’t all in on the powerful “cabal” crap. Dang, I do wish they’d lived, annnddd it is fun to peek into their afterlife. It is odd that however nasty those Nasts are, Kristof does seem like a really nice guy. For a cabal sorcerer.

Didja know you can even play hockey in the afterlife?

It is an interesting collection of conflicts. Eve has her personal ones, wanting to contact her daughter, to help her, wanting to be with Kristof, and deciding what to do about that mission. If it succeeds, what then? She’s finally realized what she truly wants, and this could jeopardize the rest of her death. That poor Kristof. He knows what he wants, but only on the right terms, and he worries for his sons. One following a path he hates, but that he believes his father would want for him. The other? Well, the other is not what the Cabals would want or expect. Talk about setting us up on so many possibilities for future stories!?!

The evil characters in this…hoo, boy. They are somethin’ else. Well, they are serial killers and demons with the truly nasty one the kind who loves the chaos, preferably with lots of evil attached, promising the world to their then “partner”, if only to get even more of a fix. Hey, I’m not saying the partner(s) don’t deserve what they get. They do, every bit of it. But I do think they should be tormented by their memories in a you-can-never-have-it-again way. I don’t care what reasoning the Fates provide as punishment for the dead supernaturals. I especially want those “villagers” the Fates send Eve to, where Eve learns just how cocky she’s been, to be bombarded daily with torment.

As for Trsiel, I am SO not impressed with him. I’m wondering if he’s partnered up with the Nix.

It’s a journey on two levels. The obvious one is Eve’s bounty hunter mission to find the escaped prisoner. The other is growth for Eve, as she discovers what she really needs in her life.

Eve Levine needs to find a way to communicate with her daughter, Savannah, and she’ll be happy. Really. But fate — or more exactly, the Fates — have other plans. Eve owes them a favor, and they’ve just called it in.

Evil has escaped from hell, feeding on chaos and death, and is very good at persuading people to kill for her. The Fates want Eve to hunt her down before she does any more damage, but the Nix is a dangerous enemy — previous hunters have been driven insane in the process.

As if that’s not problem enough, the only way to stop her is with an angel’s sword. And Eve is no angel…

Jaime, Paige, Lucas, and Savannah make guest appearances with a brief mention of Jeremy and Elena.

Eve Levine is dead, but only in the earthly sense. Once one of the most powerful women in the supernatural world, this Aspicio half-demon and black arts witch lingers in the afterlife. Lord Demon Balam, Master of Sight, is her father. She and Kristof Nast, a sorcerer who is also dead, are Savannah’s parents. Kristof has embraced what he loves in this new “existence”, including playing hockey.

The Fates are…
…the guardians of the supernatural layers in the ghost world and handle the major disciplinary issues. Hence the need for law courts where Kristof works. The Searchers are the Fates’ law enforcement arm who corral the ghosts and retrieve whomever the Fates want to…talk to… The lower realms hold the really nasty ghosts. Wraiths function very well as clerks and have never been alive.

Savannah Levine is Eve’s daughter, currently living in Portland, Oregon, with Paige Winterbourne, a witch shorn of her coven and chased from her home. Lucas Cortez has left his family, and as a lawyer, helps the less fortunate. Adam Vasic is an Exustio half-demon and best friends with Paige, Lucas, and Savannah who has a crush on him.

There are four levels of angels, the earthly messengers of the Fates who enforce certain codes on an individual level: the first wave was the full-bloods, a second wave, a third wave of angels with some human blood (so they can better keep up with the world of humans), and a fourth wave of ascended angels, ghosts who perform a difficult quest and are elevated. Shekinah and Balthial are two of the first wave of angels. Zadkiel is an angel who normally handles the inaugural quests, i.e., the first mission that promotes a ghost to angelhood. Trsiel is supposed to be Eve’s guardian angel.

Jaime Vegas is a necromancer who makes her living “connecting” audience members with a deceased loved one. There are a few ghosts in whom she has no interest, the drunken accountant without a head, for one. Robin McKenzie was shopped by his wife, Cheri, who’d been inspired by a murderess from the 1960s.

The Nast Cabal is…
…one of four sorcerous organizations. Based in L.A., the CEO is Thomas Nast, Kristof’s father. Kristof’s sons: Sean is finishing up his MBA, and Bryce switched his major from music to law when his father died. Austin is a cousin.

The Danvers Pack of…
…werewolves is led by their Alpha, Jeremy Danvers, an artist. Savannah spends quite a bit of time with them.

Nixen are…
…actually demi-demons who provide resolve to people already tempted to do evil deeds. The Nix in this story has evolved due to a deal she made in 1666, and she escaped her prison hell dimension 100 years ago.

Three were sent after her: Janah was an ascended angel; Katsuo; and, Andrei Dachev, a supernatural serial killer who had seen the light.

Events at Dalewood Psychiatric Hospital may…
…well explain a lot of the problems for the insane. Ted, a headless accountant, acts as bouncer. The patients include (or included) Barton and Bruce. Franco is one of the therapists, and Chang is an orderly. Peterman also works there.

Today
Glamis Castle, Scotland, is where the White Lady, Janet Douglas, a widow and the sister of Archibald Douglas, walks. Sounds like being Lord Glamis‘ widow was a good thing. The monster of Glamis was imprisoned by Lord Baal. In the ghostly Deerhurst, Alaska, Charles has been out in the bush too long. Marcello is a werewolf. Lily is a cleaning lady at a community center in Portland who feels invisible. Brett is the guy she loves. Amanda Sulllivan is a modern-day Medea. George is a young ghost at the prison who died of smallpox when he was five.

Luther Ross, a Gelo, is based in Roatan, Honduras, and teaches other ghosts how to be poltergiests…he’s just in it for the sex. Most of his students are nymphs, including Annette.

1962, Edinburgh
Suzanne Simmons was fascinated by young children. Eric had been Suzanne’s partner.

1938, Cleaveland
Agnes Miller, a surgeon, has this crazy idea for drawing attention to the hopelessness of the unemployed. Eliot Ness hadn’t a clue about the Mad Butcher of Kingsbury Run.

1927, San Francisco
The frivolous Jolyn finally has that invisible friend she’s always wanted and names her Victoria. She also has a good excuse to exercise her desires. Bradley is her wealthy lover. Nellie and Dot are the friends who are getting so boring. Samuel is a baggage checker.

1892, Massachusetts
Lizzie Borden is angry for her sake and her sister’s, Emma. Andrew Borden is her controlling and cheap father. Abby is Lizzie’s stepmother. Uncle John is discussing that new will. Bridget is the maid. Mr O’Neil is a farmer.

1666, France
Marie-Madeline d’Aubrey, the Marquise de Brinvilliers, has a father, d’Aubrey. Françoise is her hapless maid. Gaudin Sainte-Croix is the marquise’s lover. Nicolette is a spectator of more than one event at the beheading.

Demons
Not so surprising, it seems that angels and demons are the same, if you go back far enough. Aspicio have supercharged visual abilities, poltergeists are really telekinetic half-demons, and Geos are ice demons. Aratron is a high-ranking eudemon, a “nicer” demon. Dantalian is the Master of Transmigration and the Duke of Baal.

Ghosts
There are two categories of “earth-spooks“, one of which refers to those sentenced to limbo for a period until the lesson is learned.

Serial-killer Hell
Bird-man, club-man, a werewolf, knife-man, and a redhead.

Mrs Appleton had been Eve’s sixth grade teacher with the ability to make her squirm. Nymphs had lost their special abilities years ago and only re-discover them when they die. The Dantalian amulet allows a demon-blooded wearer to inhabit a human’s body. Sorcerers and magicians are related, but magicians are a sub-standard form of spell-casters with witches outranking at least the magicians. Liza is one of the women working with Paige on the Elliott Memorial Walk-and-Run. Trevor is Savannah’s current boyfriend.

The cover is a range of oranges to yellow with the deepest orange in the body of the nude woman, her long dark hair curling down her back, who stands with her back to us, her arms crossed, a pentagram pendant dangling from one hand. In the background, the yellow eye of a cat stares back at us, demons cavorting in the flames beneath its eye. The title is at the top in a black-shaded white with a simplified gothic font; the author’s name uses the same but at the very bottom. A white info blurb is below this in white. Spanning the body and above the author’s name is an invitation in peach.

The title certainly suits as so many of the characters are possessed, for this story is filled with the Haunted.