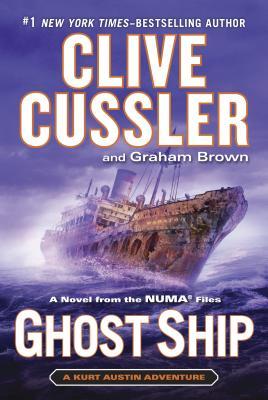 When Kurt Austin is injured attempting to rescue the passengers and crew from a sinking yacht, he wakes with fragmented and conflicted memories. Did he see an old friend and her children drown, or was the yacht abandoned when he came aboard? For reasons he cannot explain, Kurt doesn’t trust either version of his recollection.Determined to know the truth, he begins to search for answers, and soon finds himself descending into a shadowy world of state-sponsored cybercrime, and uncovering a pattern of vanishing scientists, suspicious accidents, and a web of human trafficking. With the help of Joe Zavala, he takes on the sinister organization at the heart of this web, facing off with them in locations ranging from Monaco to North Korea to the rugged coasts of Madagascar. But where he will ultimately end up even he could not begin to guess.

Twelfth in the NUMA Files thriller series and revolving around Kurt Austin and  Joe Zavala.

My Take
It starts as all Cussler stories do, with great drama and trauma. And it keeps going until Cussler/Brown screw up with Forrester’s overly exaggerated reaction to Kurt. One that makes sense on one hand, but is so over-the-top that it gets my radar humming immediately.

If it’s action and crazy antics while traveling the globe, underwater and underground exploits with James Bond-style you want and a touch of Tarzan, you can’t go wrong with Ghost Ship.

Now if you want true fear, keep reading. There’s nothing scarier to me than a computer virus that allows a computer to go rogue, especially when you consider all that computers run today.

I love the idea of the Chameleon Camo, but I do think they need to extend its useful life! Like the sound of those railguns too!

The Story
The stage is set with a hijacking in 1909 and starts with both loss and recovery.

It’s the storm in 2014 that will both reveal and take, and it does take Sienna and her children while her husband survives. Despite the nightmares, despite what he saw as he tried to rescue them, Kurt doesn’t believe she’s dead. He’s got feelers out everywhere hunting for a clue, any hint of where she is.

It’s his obsession that is worrying his friends and the government. Until the CIA picks up on one of those clues.

It’s the source of those clues that’s the real danger, for nothing is as it seems.

The Characters
2014
Kurt Austin is director of special projects while Joe Zavala is the team’s assistant director, a creative engineer, and Kurt’s best friend; both work for NUMA. Kurt’s current lover, Anna Ericsson, is supposed to be his therapist.

Dirk Pitt has been the director of NUMA for several years since Admiral James Sandecker became vice-president of the United States. Congresswoman Loren Smith is Dirk’s wife. Hiram Yaeger is NUMA’s head of computer tech; Max is the holographic representation of Hiram’s ultra high-tech computer system. And doesn’t it just burn Hiram that he has to use pen and paper, lol. Paul, a geologist, and Gamay Trout, a marine biologist, run NUMA’s most important scientific studies. William “Duke” Jennings is one of NUMA’s most experienced submersible pilots. Elena is a former Navy diver. Jacob Fredricks. Dr. Elliot Smith is NUMA’s chief medical officer

The NUMA vessel Condor is sent to Durban to raise the Ethernet. The U.S.S. Bataan will play an important part in the rescue. Charlie is the radioman who notices the fake call sign. The Force Recon Marine leader is Lieutenant Brooks. Jones, Lance Corporal William Dalton, and Garcia are among his team. Air Force Staff Sergeant Connors explains the Chameleon Camo.

Trent MacDonald from CIA is wondering if Kurt isn’t right. Sutton is from NSA. Tim Hale is CIA station chief for the DMZ in Korea; Colonel Hyun-Min Lee is deputy director of security for the South Korean National Intelligence Service. Private Jeong gets a surprise.

Mohammaed El Din, a purveyor of information, is a contact of Dirk’s in Dubai. Abigail Banister was a telecommunications expert. Her husband, Stewart, was a satellite guidance specialist. They had two sons, Nathan and Zach, and a daughter, Olivia.

Desert Rose is the name for a racehorse and a possible handle for
a weapons expert and guidance system engineer. ZSumG, a.k.a., zero sum game, is likely to be a financial hacker. Montresor is the handle for Diego, and he builds doorways mostly dealing with finance. Xeno9X9 is the handle for Goshun, a Ukrainian who went missing a year ago.

The Ethernet is a private yacht on which Brian Westgate (an Internet billionaire), his wife, Sienna (an old love of Kurt’s), and their two children, Elise and Tanner, are sinking. David Forrester is the CEO of Westgate’s company. Phalanx is a security program to end all security programs, and it was designed by Sienna. A program now protecting all of the U.S. government.

Today’s Brèvards
Sebastian Brèvard is the head of the family and ruthless in his plans. Egan and Laurent are his equally ruthless, but less intelligent brothers. Calista is their youngest sister, a sociopath with a talent for computers and systems, who delights in destroying others.

Rene Acosta is an ally, they thought. Kovack is Acosta’s too-cocky messenger and right hand man. Solano is an art expert used by Acosta. Than Rang is a Korean industrialist specializing in mining, waste management, and energy with a desire for computer experts.

NUMA is the National Underwater Marine Agency dedicated to the study and preservation of the sea.

1987
Cuoto Zumbana is a fisherman who caught the unexpected, a beaten old dinghy with a dead woman and her two sons.

1909
Chief Inspector Robert Swan of the Durban PD is determined to stop the Klaar River Gang. Morris is one of his men, I think.

The S.S. Waratah is captained by Joshua Ilbery. Gavin Brèvard and Johannes are some of her passengers. Claude Sawyer was one who chose discretion.

The Klaar River Gang had escalated from being common highwaymen to robbery and extortion.

The Cover
The cover is purples and orange, deep rusty oranges as the ghost ship, S.S. Waratah, plies the purple waves under a stormy purple sky.

The title refers to a ship that’s been missing for decades, a Ghost Ship that holds the clues to prevent the theft of the century.