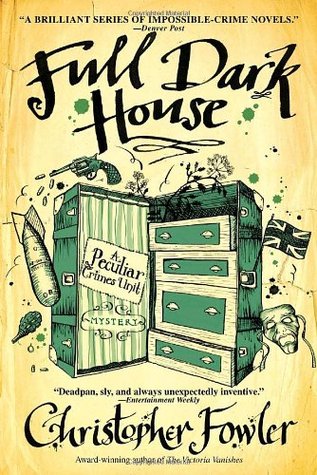 First in the Bryant and May Peculiar Crimes Unit historical mystery series and revolving around a pair of detectives who, thankfully, balance each other, and which flips between 1940 and 2000 in London.

It’s a peculiar start with the death of one of the main characters. In between, there are some flamboyant theatrical deaths…shades of Phantom of the Opera(!)…and a contradictory partnership of the offputting Bryant and the more level, realistic, and diplomatic May.

It’s that theatre case in 1940 that finds Arthur going off the deep end and is connected to the event of Arthur’s death which allows May to reminisce about past cases — a brilliant way of dumping information on us. It’s also a great way to introduce Bryant’s fascination with the occult and his fantastic imagination.

The “time travel” can be a touch confusing as Fowler flips back and forth between today’s investigation into Bryant’s death to May’s introspection about their first case together at the Palace Theatre, the progression of which causes Bryant to compare the PCU to Orpheus, “rushing headlong into the light of a terrible new world”.

You’ll learn some interesting tidbits about how Londoners coped with the blitz, such as leaving your white shirttail hanging out when on a bike, so motorists can see you during a blackout, sandbag substitutes, the concern for morale, and the food shortage problems. For the prurient, Fowler explains the “excitement” of the cancan, lol. What he calls “a real trouser rouser”…*laughing*… Fowler also has a lovely explanation of what’s behind the thinking on Offenbach’s Orpheus. Makes me want to explore the original tale and the opera myself.

Fowler helps create a more fearful atmosphere with the terrible situation for the theatrical people: the fear of the bombings combined with the fear of who is killing them off.

It’s complex and twisting and found me re-reading sections to get the gist, but very well worth reading. You will CRACK up when you get to the end. It’s so Bryant, ROFL. To call Bryant eccentric is to lowball the guy. He’s a danger to technology and stuffed shirts.

I’m eager to see how Fowler continues in The Water Room since we’ve had the beginning and the (possible) end already.

A bomb rips through present-day London, tragically ending the crime-fighting partnership of Arthur Bryant and John May begun more than a half-century ago during another infamous bombing: the Blitz of World War II.

Desperately searching for clues to the saboteur’s identity, May finds the notes his old friend kept of their very first case and a past that may have returned…with murderous vengeance.

It was an investigation that began with the grisly murder of a pretty young dancer. In a city shaken by war, a faceless killer stalked London’s theatre row, creating his own sinister drama. And it would take Bryant’s unorthodox techniques and May’s dogged police work to catch a fiend whose ability to escape detection seemed almost supernatural — a murderer who decades later may have returned to kill one of them…and won’t stop until he kills the other.

Bryant and May can be found in both times.

Detective Arthur Bryant died in a bomb blast that took out the office. Just as he and May were about to retire. His partner, Detective John May, is the level-headed one. Detective Sergeant Janice Longbright has just retired. Liberty DuCaine is part of the forensic unit. (His brother’s name is Fraternity.) Sam Biddle is Sidney’s grandson and is the new liaison officer between the Peculiar Unit and the Home Office. Dr. Oswald Finch is the now-retired forensic pathologist. Raymond Land is the new unforgiving head of the Unit.

Dr. Leigh is at the Wetherby, a clinic for patients suffering from senile dementia. R. and Maurice Mamoulian have a dog, Beaumont, and they’re May’s neighbors. Stanhope Beaufort has a practical, ahem, perspective on architecture. I loved his explanation of architecture versus his own comfort. Maggie Armitrage is a spiritualist and one of a very few left in the Coven of St. James the Elder along with Neema; Olive can’t handle the stairs anymore. Do pay attention to Maggie’s predictions. You’ll be surprised.

The North London Peculiar Crimes Unit is…
…a new organization intended to handle controversial cases that could affect the country’s morale, but more especially the cases the regular force can’t handle — the embarrassing ones. Sidney Biddle is the officious, by-the-book spy planted on Bryant by their boss, Superintendent Farley Davenport, who is completely against the Peculiar Crimes Unit. Arthur Bryant (he has a dicky heart) and firmly believes in outside-the-box thinking, an iconoclast, with a true belief in the paranormal. I suspect it’s partly why he has such a difficult time with the opposite sex. Not a problem that May has. The eighteen-year-old Nathalie was the love of Bryant’s life.

”A Holborn judge … refused to hear any more from the unit’s witnesses until Bryant could assure him that they were all technically alive and in human form.”

John May had codebreaking training and this is his first day on the job; he’s the diplomat who keeps a rein on Bryant’s more excessive imaginings. Detective Sergeant Gladys Forthright (one of the first female ones thanks to the war) is engaged to Sergeant Harris Longbright; she’s also part time with the WVS. Dr. Runcorn is their ancient forensics pathologist; Dr. Finch is the new guy. Police Constables Crowhurst and Atherton are the rest of the staff. “Nasty-Basket” Carfax is the disapproving desk sergeant who’s married to Davenport’s sister.

The Palace Theatre, Cambridge Circus …
…is one of the great theatres and makes a rabbit warren seem organized. Elspeth Wynter is the front-of-house manager. Her father “died … during a trouser-dropping farce in which he had already been dying nightly”. Todd is her son. Mr. Cruickshank is the archivist. Helena Parole is the artistic director; Benjamin Woolf is an agent and Helena’s former husband. Harry Cowper is Helena’s assistant and keeps the peace. Nijinsky is the house tortoise. Stan Lowe is the stage doorkeeper; Mouse is his assistant. Geoffrey Whittaker is the stage manager. Madeline Penn is on loan from RADA and the assistant stage manager. Anton Varisich is the conductor. Olivia Thwaite is the costume designer. Mr. Mack is the head carpenter. Raymond Carrington is the lighting chief.

Tanya Capistrania is an upstaging dancer, and she’s been gettin’ busy with Whittaker and Cumberland. Her father, Albert Friedrich Capistrania, will be at the Austrian ambassador’s house. Eve Noriac is playing the title role of Eurydice, and the much-loved Charles Senechal is an Anglo-French baritone playing Jupiter; both are on loan from the Lyon Opera House. Corinne Betts is the comedienne playing Mercury. Miles Stone is the star playing Orpheus. I love that bit about Miles’ agent referring to him as “the Millstone”, lol. Betty Trammel, Jan Petrovic (Phyllis is her worried roommate), and Sally-Ann are some of the chorus girls. The high-strung Valerie Marchmont plays Public Opinion. David Cumberland plays John Styx. Barbara Darvell plays Jupiter’s wife; her son, Zachary, and his friend Larry are in the balcony watching the rehearsal.

The Three Hundred International Banks is…
…a financial group backing the production with Andreas Renalda, a Greek shipping magnate, who is the chairman. Sirius was his father; Diana his mother; and, Minos was his five-years-older brother who was passed over to inherit the business. Elissa was Andreas’ wife. Euterpe is the Muse of lyric poetry.

The more, ahem, spiritual side includes…
…Edna Wagstaff is a medium who uses stuffed cats but only Rothschild is left. Her spirit guide was Squadron Leader Smethwick. She lost her son, Billy, at Dunkirk and her daughter is in the WRNS. Bryant has friends in the Camden Town Coven, the Southwark Supernaturals, the Prometheus League, the Mystic Savoyards, the Insomnia Squad, and a large assortment of paranormalists, idiot savants, primitives, mind-readers, and madmen. The ghosts include “Man in Grey”, John Buckstone…and Arthur?

Rachel Saperstein is Miles’ mother, and not too happy about his name change nor his divorce from the “lovely” Becky. Seamus is the milkman. Peregrine Summerfield is a journalist friend of Bryant’s who wrote an exposé on the Renaldas that got squashed. The Band of Hope is a temperance group. The Archbishop of Canterbury “says they’re all going to Hell” while Bryant claims he only says that when he finds out people are enjoying something. Gilbert Riley is a snoopy critic.

The cover is quite peculiar with its pale yellow background rough edged in a scribble of a darker orangey yellow. The title and author’s name are in a deep chocolate brown. But it’s the graphic in the lower center that really grabs the eye with its old-fashioned green steamer trunk with drawers on one side and a curtained-off space on the other. Circling around it are icons representing events in the story from guns to grenades, a British flag waving as bombs drop, a tragedy mask for the theatrical shenanigans, and one swirling plant…that Bryant…!

The title encapsulates the murders at the theatre, as it results in a Full Dark House.