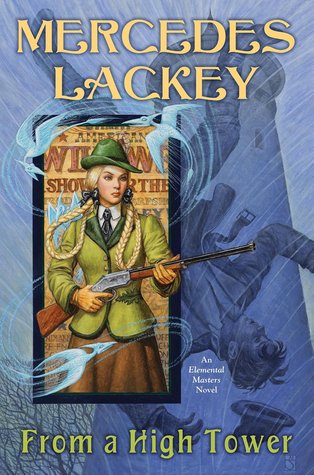 Eleventh * in the Elemental Masters historical fantasy series for the older middle-grade readers. We’re still in Germany, and I am so enjoying this foray out of England *grin*.

* I know it’s listed as tenth, but have a peek at the chronological listing of the Elemental Masters books on my website and make up your own mind.

I know some of you don’t like to read books targeted at younger audiences, and I gotta tell ya. I do adore this series. Remember that simply because a story is acceptable for someone younger than an adult to read doesn’t mean an adult can’t enjoy it.

Lackey’s take-off on Rapunzel is a much nicer interpretation of the original fairy tale. Although why Mother never explained about the hair, especially at her end, I’ll never understand. Lackey also brings in a touch of Hansel and Gretel in one of the girls’ adventures.

That horrible incident near the beginning of the story is a nice set-up for Giselle’s later activities and provides the excuse for her learning how to shoot so well. Turns out she’s pretty good at figuring better marketing for the show as well when she explains the German attitude toward the Karl May books. It’s a crack-up, and the Indians with the show absolutely adore it!

Lackey manages to slide some gentle scolding in as well when Chief Leading Fox explains to Giselle why their people need the money from the show so very badly. It’s a good reminder of how poorly the white man behaved toward the Indians. I do love Giselle’s suggestion that the Pawnee tell people they’re Italians, lol.

I love it when Rosamund shows up. I enjoyed her story in Blood Red, 10, and she’s gotten even feistier, lol. Cody is quite the macho man and doesn’t take kindly to some frail woman showing him up. Rosa does have good reasons for it, but it’s outside of everyone’s experiences so they don’t take her seriously, until…

Giselle is luckier than she first knew, as Rosa teaches her so much about her Gift. It’s Cody who teaches her about stories and reality. That stories are about what make you feel good. Make you figure out what a hero is and what’s right.

It’s a good story for older middle-grade readers as Lackey has some good morals to impart. The most obvious one is kindness, of doing unto others. It’s a behavior that proves beneficial in so many ways for Giselle.

It’s a cold bargain, one made in desperation. One that emotionally hurts the mother and the daughter. Still it is a better life that Giselle has with Mother. At least she does until Mother dies, then Giselle will have to seek her fortune.

One that will bring her into contact with her wildest dream. And her scariest moment when Hunt Master Rosamund forces her way into the show.

Giselle, a.k.a., Rio Ellie, was given away at birth, a bargain made to save her family. She has potential to be a great Air Master. She has named the area sylphs who have befriended her Luna, Damozel, and Linnet. Lebkuchen is her mare. Flitter is a sylph from Neustadt who decides to tag along.

Mother, Annaliese Bundchen, is an Earth Master and lives in a former Benedictine abbey. Griselda was a brownie who used to act as nursemaid.

Gunther von Weber is a young man who is quite proficient at shooting. Enough so that he wins any contest he wishes.

Captain Cody’s Wild West Show is…
…touring Europe, hoping to make their fortunes. Captain Cody Lee leads the band, and he has a small talent for Fire. He was a real Scout in the U.S. and speaks a variety of Indian languages. Lightning the Wonder Horse is his trick horse. Heinrich Kellerman is the show’s manager. Chief Leading Fox is Pawnee with a very special interest in earning a lot of money. He’s also a Medicine Chief with his own mastery of Air Elemental magic. Maisy, Texas Tom does rope tricks, Ned Toller is the stage manager, and Little Fred are with the circus as well. Polly is one of the Grand Quadrille horses. Pitalesharo, a Medicine Hat Pony, does some clever tricks. Fraulein Ado Ellie was their former trick-shooter.

The Maifest is…
…where Giselle’s disguise is rumbled. Tante Gretchen Wildern is an Earth Master. Hauptmann Erich Von Eisenhertz was a pig and a bully. The soldiers sent out include Hans Piedermann.

The Bruderschaft der Förster is…
…also known as the Brotherhood of the Foresters, and they act as sheriffs to protect the populace from bad elementals. Pieter Meinhoff and Joachim Beretz are Mother’s most frequent visitors. The very firm Hunt Master Rosamund von Schwarzwald is an Earth Master (we met her in Blood Red) come to investigate the charges against Giselle. Graf von Stahldorf is the Master of the Munich Lodge. Elfrida is the housekeeper Rosa engages for the abbey and a minor Earth Magician, a kitchen-witch.

Johann Schmidt is Giselle’s visitor at her tower. Dieter is his younger brother and a berserker who can shapeshift. Their mother is a witch while their father has elemental power, I think.

The Winnetou books are written by…
…Karl May about an Apache chief. Old Shatterhand and Old Firehand are other primary and beloved characters in the books.

Friedrich Schnittel is a beleaguered father struggling to find work to feed his eight kids and pregnant wife, Maria. Pieter is the oldest. Another Pieter is a troll who has been an ally of the Bruderschaft for centuries. Hans is one of the children in the cages.

The Great Air Elementals are the Four Winds. There are Storm Elementals, djinns, pixies, and bird spirits as well. An aether is a powerful, aloof air creature. The Hu-Huk is the Thunderbird, an Air Elemental, who comes to Chief Leading Fox’s aid.

A Magadalene convent is where unmarried pregnant girls were sent to repent. Evil, evil places. Vilis are the restless, angry spirits of young women. A Blood Witch is an evil thing that must be put done wherever they may be found. A frost giant can ignore magical protections. The Breath of the Ice Wurm is the very essence of cold.

The cover reminds me of her Valdemar covers. The background is a grayed-out lavendar and a windy rain as Johann twists in the air falling From a High Tower, where Giselle’s witch mother keeps her safe.

It’s Giselle who is the German Annie Oakley in a black-framed rectangular window set on the left with air sprites swirling around her, the background of the window a circus poster, and “Annie” herself in a green loden jacket, a full brown skirt, a darker loden green hat, and black ribbons tying up her looped braids of hair. It’s a rifle she’s carrying, carrying out her role in this Wild West show. The author’s name is in a gold embossed fancy font while the title is at the bottom of the cover in a light yellow green.