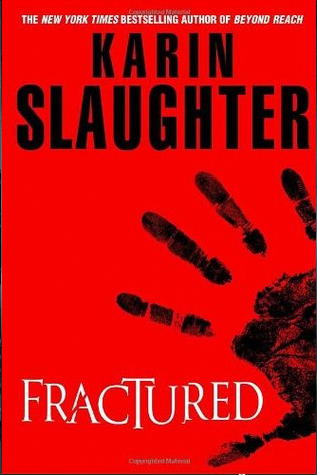 Second in the Will Trent mystery-thriller series and revolving around a dyslexic agent with the Georgia Bureau of Investigation.

Talk about mistaken identity! Hoo, boy! Then there’s that cold shoulder. Not only does the Atlanta PD hate Trent, but now he’s partnered up with the daughter of one of the cops he busted. This should be interesting, as Slaughter uses third person dual point-of-view from Will’s and Faith’s perspectives. So we get to hear their thoughts and feel their emotions, as they struggle with their own issues and learn each other.

The series is a great opportunity to shine the light on dyslexia and the problems people have. How they try to cope. It sure makes me appreciate my own reading abilities. Reading about Will’s difficulties… That poor guy. Never diagnosed, he’s struggled all these years to survive, and he has such low self-esteem! As a result he’s terrified of being found out and fired. Even though Amanda did figure it out last year. She’s still “praising” him (in her own way), and yet he can’t get out of his own head to realize that he truly has a gift.

Paul has his own insecurities with a deep neediness and adores his wife. Even after he started cheating on her. What’s with that??

That Amanda is such a user! She’s damn lucky to have Will, and boy, that boy is patient and accommodating. You only have to see how careful he tries to be with Faith, from a social standpoint as well as being the “guilty” party. I understand her anger, but she also has to understand that her mother was doing wrong. She got caught. For the rest, well I reckon she’ll figure it out soon enough.

Add this in to the fact that the PD have already screwed up this case, and Faith hasn’t a leg to stand on.

Angie is another one. Why Will puts up with her, I don’t know. She is very useful in demonstrating how timid Will is in a personal sense. There is a change in their relationship — she’s moved in with Will — and it is making Will twitchy and providing an opportunity for him to reflect on himself.

It is a crappy treadmill that Will’s on. He and Angie fight. She cheats on him. He sends her away. Then she comes back. Wash, rinse, repeat. For thirty years!? Oh, yeah, this should be an interesting series arc for these two characters!

A good bit of psychology and insight into human behavior is required, and it’s interesting to listen to Pete speculate about the murdered girl’s last minutes (+/-).

I keep whining on about parents needing to be licensed, and I suspect Slaughter might agree with me: “People did not generally choose a life of crime for the adventure. They were junkies and criminals for a reason, and the reason usually could be found in their early home life.”

Slaughter covers quite a bit of ground in Fractured and keeps the tension (and mystery) high. The conflict between husband and wife; how childhood traumas affect one as an adult in their relationships, families, and professional lives; the trauma of raising children; bullying; and, the failure of the justice system. In the end, it’s relationships that matter, that affect you as a person.

Not to worry, we’ll talk about it later…

A desirable neighborhoods, but in one gleaming mansion, a girl has been savagely murdered. And in the hallway, her horrified mother stands amid shattered glass, having killed her daughter’s attacker with her bare hands.

The murder site belongs to the Atlanta police, but Trent soon sees something that the cops are missing, something in the trail of blood, in a matrix of forensic evidence, and in the eyes of the shell-shocked mother. Within minutes, Trent is taking over the case — and adding another one to it.

Special Agent Will Trent is brilliant at reading a crime scene, just not so good at reading the printed page. Betty is the tiny Chihuahua Will inherited in Triptych, 1, from his neighbor. He has a 1979 Porsche 911 that he rescued and rebuilt.

Angie Polaski is on medical leave from her job as a detective with Vice (Triptych, 1); she’s well known for all the men she’s been with, and she’s known Will since they were both in the orphanage. She’s…something else. She and Will are engaged, for the now, and she’s moved into his place.

The Georgia Bureau of Investigation (GBI) is…
…where Will works for the ball-breaking Dr Amanda Wagner, the deputy director of the special criminal apprehension team. Caroline is Amanda’s secretary. Hamish Patel is a GBI hostage negotiator and a terrible gossip. Charlie Reed is a crime-scene tech. Becky Keiper works at the lab. Barry Fielding is the director of their canine unit.

Gordon Chew is a fingerprint expert in Chattanooga.

Atlanta PD
The thirty-three-year-old Detective Faith Mitchell is partners with Detective Leo Donnelly in Homicide…until Dr Wagner puts her with Trent, the man who forced her mother to retire. Pete Hanson is the city medical examiner. Snoopy is his assistant. Claire Dunkel retired the first week Faith was on the Homicide squad. Officer Billy Peterson is in charge of the cells.

Jeremy is Faith’s eighteen-year-old son. Yeah, Faith was a very young mother. Commander Evelyn Mitchell is Faith’s mother. Zeke Mitchell is her brother and a surgeon in the Air Force and stationed at Brandenburg. Bill Mitchell had been her very supportive father, and wow, he was really great. Faith’s uncle Kenny, an Air Force colonel, once dated Amanda.

Abigail Campano, a former lawyer, is married to Paul, who had been one of the orphans back in the day with Will and a lying control freak of a bully, who now owns a string of car dealerships. Emma is their high school-aged daughter. Hoyt Bentley is Abigail’s very wealthy father. He’s divorced from her mother, Beatrice. Stewart Bradley had been the one Abigail “should have” married. Marty and Marie are Paul’s adoptive parents.

Kayla Alexander is trouble, and Emma’s best friend. Kayla’s blindered and irresponsible parents are on a three-week vacation.

Westfield Academy is…
…an elite private high school both girls attended. Dr Olivia McFaden is the principal. Evan Bernard is the English teacher and reading tutor. Matthew Levy is the math teacher. Mary Clark is another English teacher; I think Tim is her husband. Paolo Wolf is an economics teacher. Mrs Meyers is the art director. Coach Bob is in charge of phys ed. Dr Madison is the school counselor.

Georgia Tech is…
…one of the top ten colleges and where Adam David Humphrey is a college student from Oregon and has a bond with the mildly dyslexic Emma. Harold Nestor is supposed to be Adam’s dorm mate. Gabriel Cohen seeks refuge from his jerk of a roommate, Tommy Albertson, with Adam. Julie is Gabe’s girlfriend who goes to Grady. Fartley is Jeremy’s dorm mate. Farokh Pansing sold Adam his car before he left for Ireland.

Victor Martinez is dean of student relations with an interest in Faith. Marty is Victor’s secretary. Chuck Wilson is a scientist. Evan Bernard was a reading tutor here until recently.

Gail and Simon Humphrey are Adam’s parents. Frank Gordy dropped out of Georgia Tech to start up the Varsity in 1925, a restaurant intended to serve the school and is now the largest drive-in fast-food restaurant in the world..

Copy Right is…
…a print shop where Lionel Petty works. Warren Grier is the manager Monique and Maria Contreras work mornings. Sandy and Frieda do the evening shift.

A Levi’s Call is Georgia’s version of the Amber Alert.

The cover is a bright red with a partial black ink handprint on the lower right half. At the very top is an info blurb in white and immediately beneath it is the author’s name in an embossed black. The title is in white at the bottom, positioned between the thumb and forefinger of the handprint.

The white title font is appropriately broken in places, and while a number of characters in the book are cracked, it’s Will in particular, who is Fractured.