Buy on Amazon|Buy on Audibles
Goodreads
Also by this author: Hidden, Bound, Fallen

Eleventh in the Alex Verus urban fantasy series set in London and revolving around a mage who wants to be left alone.

It’s all first person protagonist point-of-view from Alex’s perspective. And dang this is so sad and so frustrating. A lot like our own government. All those politicians who claim to be on our side but are really more interested in feathering their own nests and furthering their advancement. And none of them “see” how wrong they are. How do you make such delusional people understand?? Why is it okay for them to threaten people?

The lengths to which Levistus (and the other Council members) will go is amazing. They don’t care who gets hurt, and none of it was necessary except for their own futures. Why do they think anyone would sit there and let them torture and kill them? Without retaliating in some way?? They’re like crooks who don’t think their victims should come after them for the cruelties they’ve committed. Even Caldera, when Alex calls her on it, tries to squeak by. With all their talk of high ideals, and they never think to act on those ideals.

I had to laugh out loud at Bahamus’ sign-off. Better relationship? As if.

I am confused about the jinn, especially after that tense conversation Alex has early in the book. It seems there are two sides for them…well, aren’t there usually two sides to any question?

I am confused by Alex’s summation of that seat Morden, then Alex, used to hold on the Junior Council. It makes so much sense until he gets to the “Dark in name only” part. I guess I don’t remember if that seat was “supposed” to be held by a Dark mage on the Light Council. I dunno…

It’s an interesting assessment by Luna of what attracted Anne to Alex. Yeah, there was a love “affair”, but it was so subtle and frustrating that I ignored it.

Okay, I cracked up at Cinder’s forced conversation with Starbreeze, but then Alex’s exchange with November comes up. LOL, who knew an artificial intelligence could be so self-preserving or self-aware. After all, November is lesser in the eyes of the Light. Why should they treat her any better than the others. Then, November fills Alex in on a lot of the Council and its members back history…that Alex finds he did NOT know.

Oh man, oh man, that conversation at the end with Landis. Jesus. This is what’s wrong with politicians!

Poor Alex. No power but so much freedom before Fated, 1; now he has power and no freedom. Wonder if that’s how politicians feel after they’re elected?

I’m curious myself as to why Cinder and Shireen are so desperate to keep Rachel alive. She’s a nightmare. Phew, Jacka does finally answer this one…

It’s so sad that Alex feels that urge to help, only to have those memories rise up. Thank god. There are times when pity is not the guidance one should follow.

If you’re looking for action, convoluted figuring (by politicians), and complex characters, this is the book for you.

But be wary: the law is whatever the Council wants it to be.

Without his friends to ground him, Alex is going Dark and Darker as the Council speeds up its intention to take him down. It’s not all Alex’s fault, for he’s had to change — and embrace his dark side. But the life mage Anne has changed too, and made a bond with a dangerous power. She’s going after everyone she’s got a grudge against — and it’s a long list.

In the meantime, Alex has to deal with his arch-enemy, Levistus. The Council’s death squads are hunting Alex as well as Anne, and the only way for Alex to stop them is to end his long war with Levistus and the Council, by whatever means necessary. It will take everything Alex has to stay a step ahead of the Council and stop Anne from letting the world burn.

Alex Verus, a diviner who sees the many paths a future event may take, has had a chequered history from his apprenticeship with Richard to his independence with his magic shop until he was pulled in by the Council. His dad was a university professor.

His friends include Luna Mancuso, an adept who now runs the Arcana Emporium, is good at stealth operations. Variam Singh, a fire mage, is now a journeyman mage and works for the Order of the Shield, a division of Keepers. (Landis, an extremely capable battle mage, is Vari’s boss.) Arachne is a sentient spider weaver who had a cave under Hampstead Heath whom a dragon rescued (Fallen, 10). Starbreeze is the flighty elemental who helps Alex on occasion.

Anne Walker, a life mage, had been one of their group until she was forced to make a choice. Dark Anne is the choice with the help of a marid jinn.

The Hollow is…
…a Shadow realm where Alex and friends can hide out. Karyos is a hamadryad who has been asleep too long. Hermes is a blink fox (Hidden, 5).

San Vittore, a bubble realm, is where Dark Anne killed all those Keepers at in Marked, 9. Sagash, Anne’s first master, is a Dark mage who kidnapped Anne in Taken, 3, and took her to his Shadow realm. The Nightstalkers (Chosen, 4) were seeking revenge against Dark mages.

The Light Council
Each country around the world has its own Council, the magical government for supposedly good mages. In England, it’s split into the Senior and Junior Councils. Talisid used to be allied with Alex. Sal Sarque is no more. Alma has administrative skill. Bahamus has connections and birth. Druss had some backbone. Undaaris, a water mage, has some truly disgusting sexual habits from White Rose days.

Sonder, a time mage, had been friends with Alex, but no more. A history buff, now he’s a politician. Symmaris is a space mage.

Levistus, a mage who wields ice and mind magic, holds all sorts of blackmail material on others. Barrayar, a force mage, is his aide. Part of his security includes Coleman Ward, a.k.a. Crush who has force magic; Ito Ryuunosuke, a.k.a. Jumper who has space magic; and, Ito Midori, a.k.a. Stickleback who has another kind of force magics. More mages include Lorenz, Casper, and Christina who was only running an errand. Nirvath being appointed to the Junior Council was a smokescreen. November, a synthetic intelligence, is Levistus’ spymaster.

Keepers include Saffron, a mind mage, and her partner, Avenor. As part of the ambush, there’s Sergeant Little, Lowy, Peterson, and Caldera, an earth mage and Alex’s former friend who drank the Kool Aid.

Morden, a very powerful Dark mage, had been one of Drakh’s apprentices and later a member of the Junior Council. Now he’s an independent on the run from the Council. The Waterwood is one of his Shadow realms. Arcadia, where his school had been, is another. His current apprentices include Manticore and Lyonesse. Onyx had been his Chosen.

Dr Shirland is an elderly mind mage, who warned Alex about Anne. Klara is a German life mage. Keith Adams at Salesforce works at Heron Tower. He won’t be meeting the real Radu and Bogdan. Chalice is an independent Dark mage with chance magic who taught Luna. And Alex is running out of credit. Crystal is a mind magic mage, ex-Light Council, and on the list of most wanted who has a home called Fountain Reach.

Richard Drakh is…
…a very powerful and feared Dark mage to whom Alex was once apprenticed. Rachel had also been his apprentice, his Chosen, enticed by Drakh promises. Now, she’s Deleo on a mission with her own jinn, working to get back into Richard’s good graces and destroy Alex. Cinder used to be Rachel’s partner, but now he’s allied with Alex with the promise that Alex will deliver Rachel to him. Vihaela is a strong Life and Death mage with a reputation as an extremely skilled torturer.

More of Richard’s former apprentices include Shireen, who had been Rachel’s best friend until Rachel killed her. Now a part of Shireen lingers in Elsewhere. Her reason for wanting Alex to save Rachel turns out to have a barb to it. Khazad had been another apprentice with no loyalties.

Lord Jagadev is a rakshasa who had taken on Variam and Anne as apprentices but not for their sakes. Kato had been a majordomo at the Tiger’s Palace, a club.

The Jinn have…
… two forms: physical and nonphysical. At the top is the sultan who was served by four ifrit generals. Lesser jinn are jann.

More Info
Elsewhere is a hostile environment with major advantages on an alternate plane, if they’re dreaming. A dreamstone enables you to connect to Elsewhere while awake. The White Rose (Veiled, 6) had a huge store of blackmail material. Hyperborea is another Shadow realm, a deep one (which can only be accessed via other Shadow realms where their rules of reality vary). Mantis golems are four-armed constructs. The Concord is an international set of laws all mages are required to follow. The fateweaver gives the ability to determine future events, choose what will or won’t come to pass. Combined with Alex’s divining, he can look at future possibilities and fate lets him choose from amongst them. Martin, a friend of Luna’s from Cursed, 2, thought he was all that, and then he forgot to word it right.

The cover begins with a ragged black band at the top descending into a turquoise green sky lashed with curves of pale blue magic streaking around Big Ben and a statue on a green stone plinth. Between these objects a yellow green mass appears. Below this is the rim of a fountain with its collection of skulls incorporating all the above colors. The title is at the very top against the black in the turquoise green. The series information is below that on the left in black. A testimonial in white spans the statue. The author’s name is at the very bottom in white with a tiny info blurb above it. All the text is to the left.

The title refers to Alex and his proposal, one that is Forged amidst corruption. 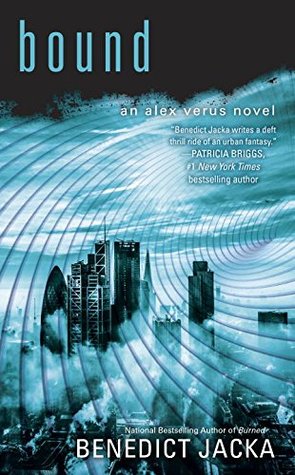 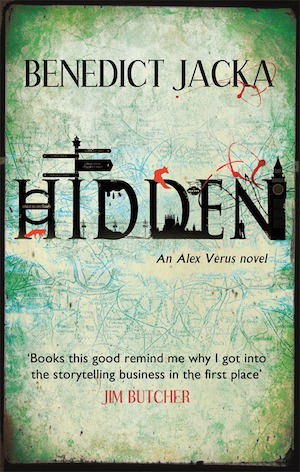