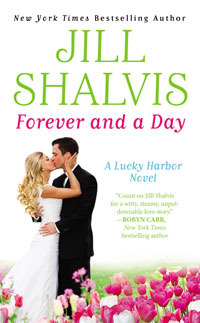 Also by this author: It’s in His Kiss, He’s So Fine, One in a Million, Second Chance Summer, Sweet Little Lies, Get A Clue, The Trouble with Mistletoe, Chasing Christmas Eve, “One Snowy Night”, Rainy Day Friends, Merry and Bright

8 responses to “Book Review: Forever and a Day by Jill Shalvis”