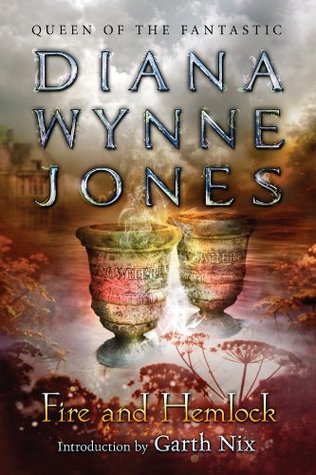 
A standalone novel that tweaks the Tam Lin and Thomas the Rhymer tales into a “modern” English story about a young girl and a cellist and set in Middleton, England. It feels as if it’s set in the 1970s.

In 1986, Fire and Hemlock was nominated for the Mythopoeic Fantasy Award.

Jones makes use of a framing device to set up this story-as-object, as Polly looks back on those memories she should have had. Be warned, it is quite the confusing story, even if it is a clever bit of writing, and I do wish Jones had been clearer on some of the events. I also wish she’d injected more terror in Morton Leroy’s threats. There was a creepiness to the story as well. Primarily because of society’s current stance on older men and young girls.

The pace is confusing, as it seems to herk and jerk, and probably because of the way in which Jones presents her story, spiraling to one side and then the other. Character-wise, it’s not the individual characters that drive the story so much as the twist Jones’ put on the Tam Lin and Thomas the Rhymer stories with the actions Polly and Thomas take.

Mum drives me mad! I detest men who fool around on their wives, but in this case, Reg may well have reason, even if he is a weasel. That Ivy is nutso-cuckoo! As for that attitude of hers about attending events at Polly’s school…take her out back to be shot! And it’s not the only incident that convinces me Ivy should never have been a mother!

Mostly Polly and Thomas communicate through letters — Tom hopes Polly will pick up hints from the many books he sends her. Once in awhile, they meet up in various places. It’s the incident with the horse that causes Polly to decide to train to be a proper hero, and it leads her in some interesting directions.

What’s the deal with Laurel being Thomas’ ex-wife, sending him to Wilton, almost adopting him??? I’m also confused about that test at the end and how Polly comes to her conclusion that she must lose to win.

Whew, those revelations at the end, that I could understand, made sense of why the portcullis didn’t hurt Thomas badly! Although, I still don’t understand why it is so important for Seb to marry Polly?

It is a fascinating story, and writers should consider reading Jones’ “The Heroic Ideal — A Personal Odyssey” at the end of the story for the books and thoughts that influence Jones’ work. I certainly liked her definition of a hero, as “the one you identify with in the story”. Then her reveal about the kinds of heroes.

All it takes is a woman being rude to change the course of Thomas’ life and cause him to gift Polly with Fire and Hemlock. A gift that leads to threats.

Now, as Polly is packing up for college, she thinks back…and isn’t sure what she remembers.

Polly Whittacker starts the story object as a nine-year-old and is torn between her crazy mother and her wimpy father. Granny is her father’s mother and Polly’s anchor in the storm of her life. Mintchoc (short for Mint Chocolate) is Granny’s black-and-white cat. Tom had been Polly’s grandfather with a talent for the violin. Ivy is her very odd duck of a mother who has issues; she gets a job at Middleton Hospital and decides to take in lodgers, including David Bragge and Kenneth Curtis. Dad, Reg, has his own problems, including Joanna Retton, the girlfriend with whom he’s been fooling around.

Thomas Lynn is a cellist with the British Philharmonic Orchestra who takes a chance. Lorenzo is the horse Thomas bought and boarded with Mary Fields, who became his girlfriend. Carla is a fellow tenant and neighbor of Thomas’. Charles Lynn is Thomas’ brother.

The name of the Dumas Quartet plays off…
…Alexandre Dumas, the writer, and includes Samuel Rensky/Tan Hanivar and Edward Davies/Tan Thare who both play violin. Ann Abraham/Tan Audel (she’s also a Leroy) plays viola. The four of them write a book, Tales from Nowhere.

Fiona Perks becomes a friend of Polly’s, and her father, Mr Perks, runs a taxi service. Hans was the German with whom Fiona ran off. The bullying Nina Carrington is the first friend mentioned who ends up with a passion for boys. Mira Anderton was the school bully. Mr Herring runs the Drama Society. Kristie Jefferson will play Columbine. Fiona played Pierrette. Mr Partridge is in charge of the field trip.

The Fantasy begins in…
…Stow-on-the-Water. Polly wants to be a hero and has created Tan Coul (Thomas) who runs an ironmonger’s shop with Polly as his assistant. Edna is his sister. Maisie Millet is a clerk at the supermarket. Tan Coul’s friends include Tan Audel, who remembers everything; Tan Thare, who calls music out of the air; and, Tan Hanivar, who is a shapeshifter.

The Obah Cypt is a quite unexpected artifact. Janet had rescued Thomas the Rhymer.

Stow-on-the-Water, England
Thomas Piper owns an ironmongery, Thomas Piper Hardware, and has a sister, Edna. Maisie Millet is a traffic warden. Leslie “Georgie-Porgie” Piper is brilliant with a flute and is Edna’s son.

Michael Moorcock is one of the authors. Mr O’Keefe is an Irishman who accepts notes. Wilton College is a public school where Sebastian is Head Boy and Leslie will attend.

The cover is quite fantastical with its murky background and hazy house and garden. The two stone vases from Hunsdon House’s garden are front-and-center in greenish-yellow, pink, gray, and browns, sitting in a white cloud, and framed by deeper reds and pinks. At the top is an info blurb in black. The author’s name is below this, separated onto three lines, seemingly encased in ice with its embossed black outline and the pink, white, and blues flowing and filling the letters. At the bottom is the title in a gradated white to yellow with an info blurb on the author of the introduction in white.

The title is the photograph that pulls it all together: Fire and Hemlock.