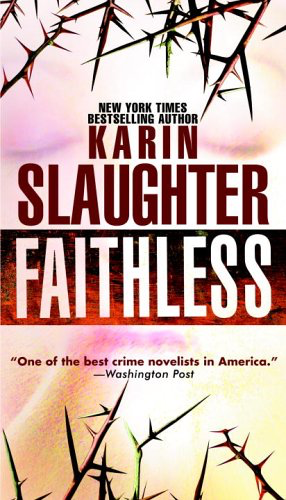 Fifth in the Grant County thriller series and revolving around Dr Sara Linton and Police Chief Jeffrey Tolliver. It’s been about a year since Indelible, 4.

It’s love and family against pure evil. With multiple third person point-of-view, Slaughter provides insight into Sara’s, Jeffrey’s, and Lena’s thoughts and emotions — I felt Jeffrey’s frustration, so deeply that I am truly ticked off at Sara for blowing hot and cold on a whim. I get that Sara is still so ticked off with him about his indiscretions in the past. I’d be too. But, jesus, girl, make up your frickin’ mind!

As for that Lena. She’s driving me mad with her love-hate relationship with herself. Slaughter did a decent paragraph, describing why some women stay with a man who hits them. And isn’t that sad. Of course, Lena, being Lena, goes way beyond the norm, even in this.

I sure did appreciate how nicely Slaughter misled us at the start about The Church of the Greater Good, and slowly, ever so slowly, made a difference in my perceptions.

Oops, seems Mom had an indiscretion, which provides for some interesting speculation, and — the selfish Tessa is having a moment! Hope it lasts.

It’s a decent thing the Ward-Bennet family is doing, helping people get back on their feet. Unfortunately, they’re like parents everywhere who don’t listen to their kids.

I think Sara and Jeffrey need a bigger bed, lol. Yep, it was another pip from Slaughter, and I absolute hate that Beyond Reach is the last in the series.

An angry chase leads to a stumble, which leads to an old pipe sticking up out of the ground, one that smells the wrong kind of bad. It only gets worse when Sara and Jeffrey get to the other end of the pipe.

It’s but the beginning of this end of their journey through their own stormy relationship and leads on to discover the evils that live amongst them.

Dr Sara Linton is the county coroner abd the town pediatrician who can’t have her own children. Billy and Bob are her rescued greyhounds. Tessa is the younger sister who suddenly has a yen for religion. Devon is Tessa’s ex-boyfriend. Cathy and Eddie, a plumber with his own business, are their parents. Aunt Bella lives large and can knock back the liquor; her first marriage was a shocker: to Colt, a stockbroker. It lasted a year. Granny Earnshaw (Cathy’s mom) had campaigned for women’s suffrage. Hare is Sara and Tessa’s cousin, another doctor. Hare’s dad was another of those fire-and-brimstone guys. Carlos has been Sara’s morgue assistant for over ten years.

Police Chief Jeffrey Tolliver [of Grant County] has been asking Sara to re-marry him, and he has a passion for the Civil War. Jared is the son Jeffrey hadn’t known about. May Tolliver is his drunk of a mother. Dr Cal Rodgers had been the ER doctor when Jeff was a kid.

Grant County PD serves…
…three cities: Heartsdale, Madison, and Avondale. Of the patrolmen, Brad Stephens is the youngest; Pat Stanley is one of the best; and, Marty Lam is one of the worst. Marla Simms is the station secretary. Frank is one of the detectives.

The singleminded and selfish Detective Lena Adams, who has been with Grant County for fifteen years, has issues from a kidnapping-rape three years ago. Lena is currently living with Nan Thomas, Sibyl’s lover. Hank is the uncle who raised the twins when their parents died; he lives and owns a bar in Reese. Sibyl had been Lena’s twin until she was Blindsighted, 1. Mindy Bryant is a friend of Nan’s.

Heartsdale is…
…a college town. Bill Burgess runs the drycleaners. Little Jimmy Powell‘s leukemia is getting worse. The Pink Kitty is a titty bar with Albert Fitzgerald as the manager and Charles “Chip” Donner one of the bartenders who’d been sweet on Abigail. Patty O’Ryan is a stripper with a major attitude.

Buddy Conford is a defense attorney, and it turns out, Patty’s stepfather. Mr Harris is a roomer in Chip’s building. Liddy and Roger were a pair of thoughtless teens. Brock’s Funeral Home is owned by Dan Brock; Audra is his doting mother. Dale Stanley is Pat’s brother and a metal plater who restores cars. His wife, Terri, does the upholstery. Their son Tim has asthma real bad. Sally is Dale and Pat’s sister.

Avondale is…
…the poorest of the three cities. Thomas Ward started up the Holy Grown Soy Cooperative, that uses farming to raise funds for its outreach programs, as well as The Church for the Greater Good. His children include Leviticus “Lev”, the oldest who is the widowed pastor and had worked in the academic world in psychology; Mary Ward Morgan; Rachel, who is married to Ken; Paul, a lawyer who likes the good life; and, Esther, a registered nurse who is married to Ephraim Bennett who currently leads the family while Thomas recovers from a heart attack.

Ephraim and Esther have two girls: Abigail and Rebecca, who lives to run away. Zeke is Lev’s son. Genie had been Mary’s trusting daughter while William and Peter had been her sons, who moved out west as soon as they could. Cletus “Cole” Lester Connolly is the fire-and-brimstone foreman. Some of the workers were Gerald, Bailey, Kat, Mike Morrow, Larry Fowler, and Barbara.

Another Barbara is Paul’s secretary in Savannah. Stephanie Linder owns a house in Savannah. Adam was the her ticket out. May Ann Bledsoe works Dipsy’s Diner.

Catoogah County PD is…
…headed up by Ed “Two-Bit” Pelham, who is completely useless, unless he can fob off a case on someone else. Joe Smith had been the previous sheriff, a good guy. Jim Ellers is their coroner.

Georgia Bureau of Investigation
Nick is the local field agent. Ron Beard is at the state lab.

Primitive Baptist is the Linton family church. Jolene Carter had been the most popular girl in high school. She’s also the woman Sara caught in bed with Jeffrey. Miss Fleming had been one of Jeff’s English teachers who had sparked something in him. Mrs. Dugdale was the Sunday school teacher for Lev and Sara.

The cover is grimy billows of cloud-like masses rippling across the white background, a complement to the thorny branches poking in from the top and bottom. The same deep burgundy used on an inner tabbed page colors the info blurb atop the author’s name, which is in an embossed and scratchy black below which is the debossed title in a background band of a dark metallic red. Another info blurb is below that in black. Sure wish she’d have put the series info on it!

The Faithless will inherit an eternity in the fiery pits of hell…and I know just who is gonna spend a whole lotta time there.