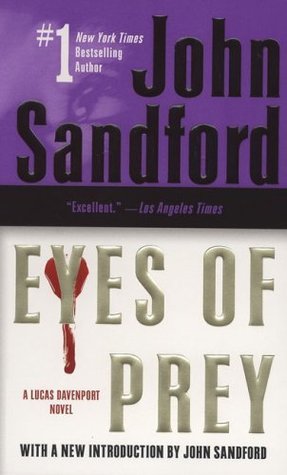 Two killers. One hideously scarred. The other strikingly handsome. And Lucas Davenport must find them both in a case that could push him over the edge.

Third in the Lucas Davenport thriller series revolving around a dirty, yet honest cop based in Minneapolis.

My Take
I don’t normally read introductions. It’s more of a hit-or-miss, if I’m in the mood kind of thing, yet I’m finding Sandford’s introductions interesting. They add an extra depth — and horror — to the story I’m reading. This one, in particular, is very useful for writers as Sandford talks about how the gruesome bits developed, the questions he asked himself. Do not read too much into all of what he says…some of it develops much later. It is fascinating to see how far Sandford takes Bekker’s obsession. It only takes a tug, and you can unroll the ball of possibilities in so many different directions.

This one uses the plot from Strangers on a Train, a fact that isn’t obvious until that first kill, and Sandford leads us into it beautifully. I’d been so impressed with how much Bekker knew about the victim-to-be. The amount of surveillance that he must have done, only to be horror-struck when we learn the truth. A truth that only gets worse as she lies dying, helpless when help is available. A truth that gets still worse when you get to the end. God. I am absolutely dying to read Silent Prey next! I gotta know what happens!!

Sandford also talks about how Lucas develops his video games, which I find interesting.

Jesus, when you read the report on the forensics at the crime scene. When you think of how much time Loverboy took to remove all traces of his presence while his lover is dying in the kitchen. Christ.

I don’t know why I’m ever amazed at the things humans can come up with to study. Bekker’s social organization of death is one of those, and yet as I read Sandford’s “explanation”, it makes perfect sense on a very sensitive topic. It makes me think of how Maisie Dobbs uses her techniques of observation to determine innocence, guilt, fear, happiness, etc.

LOL, that scene where the reporter in the very short skirt gets up on a chair and the cops sit down around her… Nice to know the cops are just guys *she says laughing*

It makes me nuts when authors toss these labels around without thought, so please note the difference between a psychopath and a sociopath — one is worse than the other. And when you read what Bekker gets up to, it’s really easy to tell that he’s the psycho. What he does to Sybil is enough all on its own.

Thank god for Lucas coaching Del through this date. It makes for a welcome bit of comic relief. Some good dating tips for the guys as well, *grin*.

Okayyy, this is why you should practice discretion. Don’t talk about what your boyfriend lets slip, especially when murder is part of the picture.

”You could do more than contain it…but you can’t, can you?” takes on a whole new meaning…

The Story
A fatal beating with almost no clues — although everyone who knew Bekker that the police talk to think that he did it. They don’t need to know about evidence, they know Bekker.

The Characters
Lieutenant Lucas Davenport is suffering from a major depression, still recovering from the gunfight and losing his woman and his daughter in Shadow Prey, 2. He’s also a games developer and has a nice income from it, enough to afford that Porsche and nice clothes. Sister Mary Joseph was Elle Krueger back in her civilian days. Now she’s a psychologist and still Lucas’ friend. One who’ll play his computer games with him. Jennifer Carey is the mother of his two-year-old daughter and still with TV3. She’s also still shutting him out.

Minneapolis PD
Del is undercover for Narcotics and is a friend of Lucas’. He’s also Stephanie’s cousin. Quentin Daniel is the chief of police. Sloan is in Intelligence, Swanson, nobody respects Andy Shearson, Shirl’ is a dispatcher, Sergeant Harry Barlow is with Internal Affairs, Bucky, Karl, Frank Lester is deputy chief for investigations, and Mikkelson is a deputy medical examiner.

Sheriff’s Deputy D.T. Helstrom is the Wisconsin cop who catches the deep woods burial. John Barber and Howie Berkson are Maplewood cops. They’re not impressed with Shearson either.

The hospital
The beautiful Dr. Michael Bekker is a forensic pathologist fascinated by death who works at the University Hospital, a teaching and research hospital — and a psychopath with a major drug problem. To put it plainly, he’s a major whack job. Stephanie Bekker is his wife, interested in antiques and people and an avid gardener. Sybil Hart is dying of Lou Gehrig’s disease. What should it matter if someone helps her along? Dr. Larry Merriam is a pediatric oncologist who wouldn’t allow Bekker back to continue his research on the social organization of death. His secretary, Clarisse, can’t keep a secret to save her life. Cheryl Clark is a nurse with whom Bekker had an affair.

Philip George is a law professor. Annette George is his wife.

The Lost River Theatre
Carlo Druze is a sociopath, a literal monster thanks to his cheap parents — licensing parents?? Have I mentioned this? — and an actor. Elizabeth Armistead is an actress and a member of the board of directors for the theater. Shhh, she doesn’t like ugly people. Mrs. Ray Ellis doesn’t appear to have liked her neighbor very much. Cassie Lasch is the second-string actress who caught the significance of the caller asking for a freebie. Kelly is the lady at the ticket-window. Davis Westfall is the co-artistic director.

Media
Carly Bancroft is with TV3 — and her contract is up in a couple months.

Randy Whitcomb is a teenage pimp with anger management issues. Marie is the hooker who saw what he did. His lawyer is a sleaze by the name of Marty McKenzie, and he’s gone to internal Affairs. Richard and his wife are the neighbors in Wisconsin’s woods. Kelsey Romm is in the wrong place at the wrong time. At least she’ll never have to worry about her workload.

The Cover
The cover is color blocked into a lovely blue purple with the author’s name and a blurb — there’s some kind of figure in a lighter value in the upper left corner, a band of black and then white for the title and series name which is an embossed gold. The disturbing part is the droplet of blood.

The title is the target, the attraction, the Eyes of Prey.