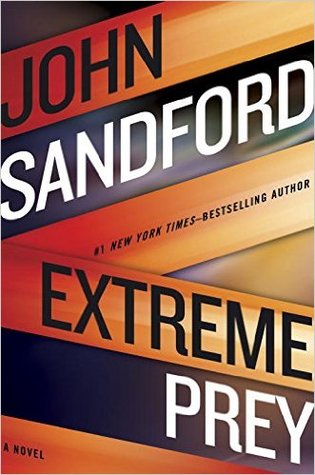 Twenty-sixth in the Lucas Davenport detective mystery series and revolving around a wealthy detective who likes to do it his way.

This is an introduction to how/why Lucas will be getting a new and rather different job.

I can understand Marlys’ anger, but I cannot understand her thinking this is the way to fix it. All it does is destroy a lot of lives. She and her sons do impress me with how self-sufficient they are. They are definitely hard workers and didn’t deserve to lose their farm. Nor does Cole deserve to be ignored by the government that sent him to war. As for Likely’s diatribe…yeah, I have to agree with that as well. As for Likely’s hiding stuff from Lucas…that is really a mistake. It’s one of the major reality tropes that have never made sense to me. Why not tell the cops what you know? They are going to find out. It may take longer, but oh baby…

“If only we had some easily accessed, widely distributed source of information that we could tap into…”

Jesus, these people are so incredibly paranoid. Makes me want to smack ’em around. Oh, brother, then there’s Mitchell and his partner’s reaction to the murder. As for Lawrence…I do not feel sorry for that nasty woman in any way shape or form. I can’t believe the way she thinks!

A T-shirt that proclaims: “NSA, Our Customer Service Pledge: You Talk, We Listen”

It’s an interesting case Lucas is working, without a net. No badge, no carry permit for his gun; it’s a good thing he has such a great reputation and a good network. Although that network isn’t much use when questioning people. Lucas is missing that badge…

I cannot believe Marlys would take her granddaughter along on her killing trips. For that matter, why didn’t Baker keep quiet or get out the door faster!

It does frustrate me (and make me laugh) how distrusting Michaela Bowden’s people are of Henderson’s warning. It’s frustrating how uncooperative people are, how paranoid, and how funny the interactions are between Lucas and law enforcement. It’s so real what with the pickles, gun permits, etc.

I enjoyed the epilogue. Thank god for Willie Purdy’s actions, and go, Jesse! The news footage of the aftermath at the state fair should provide all politicians with a major lesson. And it wasn’t fair what happened to Robertson — he’s a great guy, and I enjoyed his character. His and Lucas’ interactions are a crack-up.

After the events in Gathering Prey, 25, Lucas Davenport finds himself in a very unusual situation — no longer employed by the Minnesota BCA.

His friend the governor is just cranking up a presidential campaign though, and has had some
scary encounters that have him on tenterhooks. It’s the kind of “scary” that has the governor calling Lucas for help on the campaign trail.

Interfering with the carpenter can only “entertain” so far, and Lucas gladly hits the road — pushed by a frustrated Weather, lol. Should be fun! Lucas thinks, and it kind of is — until Lucas finds himself stymied by the lack of that badge.

The unemployed, poetry-loving, clotheshorse known as Lucas Davenport is enjoying his summer. Weather, his surgeon wife, is thrilled at the governor’s call. Their son, Sam, is eight years old now while Gabrielle (Stolen Prey, 22) is big enough to sit in her own chair at the table. Their oldest daughter, Letty, is away at Stanford; Lucas’ daughter before Weather lives with her mother.

“‘I’m pretty delicate,’ Lucas admitted. ‘You know, when I’m not beating somebody senseless.'”

Michaela Bowden and Elmer Henderson, the current Minnesota governor, are both campaigning for the democratic ticket, although Henderson is realistic about his chances. He knows his college antics will get out. Additional candidates include Carl Bartley from Ohio and Doug Jensen from Missouri.

“What a rotten, cynical question to ask. I’m proud of you.”

Walt is “not a hired hand” to fight on the campaign trail. The Barkers band has a state senator’s brother in it.

Iowa Law Enforcement
Bell Wood heads major crimes in the Iowa Division of Criminal Investigation and is a friend of Lucas’. Perry Means is also with the DCI. Anthony Pole is their jerk of a director. The various cops include Randy Ford and Jerome Robertson (he’s gay and gets shot by Cole, a cool guy) are investigating the first set of murders; Russell Monroe, the computer jock, Jim Whalen, and Ed Vernon; Tom Robb; and, Mark Soper. Ricky Vincent should never have become a cop.

Al Brown is the head of the Iowa campaign security team; Chuck Stevens is the assistant chief. Sam Greer.

The enraged Marlys Purdy and her sons are quite self-sufficient with their truck garden, canning, rabbits, and hunting. Jesse is the innocent son who sells their produce at farmer’s markets; he’s recently divorced from his bed-hopping wife, Willie, with Clark Berg, Stout, Merritt… Caralee is Jesse and Willie’s young daughter. Marly’s son Cole came back from Iraq damaged. Twenty-eight years ago Wilt, Marlys’ husband, drove into a concrete pillar. John Pugh may step in and take care of their stand.

Amy is the mail lady. Lori Schaeffer; Sandra Burton and her two sons; Sherm Miller, one of the richer farmers around; and, the Southers are neighbors. David Souther is a poet and hippie type. His very shy wife, Janette, converts the wool from their sheep into blankets and wall hangings which they sell.

The Progressive People’s Party of Iowa…
…Joseph Likely is the aging activist who leads the group. Patricia Baker is a “friend”. Hey, old folks still like sex! Pamela Carney is the woman Mrs. Baker lived with and helped. Anson Palmer has written a 3,000-page book “explaining” how the Jews are responsible for everything bad. For some reason, publishers aren’t interested. Grace Lawrence has been the party secretary for years. She has some serious secrets to keep about the Lennett Valley Dairy bomb, including Betsy Skira (she’s married to Stan Jacoby these days). Harrison Williams, June Ellis, Professor Lance Mitchell, Toby Hopkins, Barry Wright, Cheryl Lane, Bert Hughes, Harry, Russ Madsen, Hendrick Fischer, Tom and Mary Moller, George Spate, Marcia Boone, and Gloria Whitehead are some of the members.

Lucas’ friends include…
…Lauren Kidd, a professional jewel thief, and her husband, Kidd, a very successful artist who owns the hacker world. Lucas has his suspicions, but is willing to make use of Kidd’s computer talents. Jimi is the carpenter Lucas is driving nuts. Del and Cheryl Capslock know Lucas from law enforcement. Virgil Flowers used to work under Lucas, until Lucas quit. Now he and Johnson Johnson, Virgil’s best friend, invite Lucas to go fishin’. Virgil is still seeing Frankie. Sister Mary Joseph (Elle Kruger in her previous life) is a psychologist at St. Mary’s University and has consulted on previous cases with Lucas as well as being Lucas’ oldest friend.

“He’s the … Hound of the Baskervilles when it comes to women. Every time he gets around my daughter, I make sure I’ve got my gun.”

Dick, er, Ralph, is the golf shop guy who screws it up for Lauren. Randy Pence is a Bowden supporter. Jack Gardner is a journalist. Taryn Grant is a psychopathic senator (Silken Prey).

The cover is angled bands of gradated orange-yellow and black-gray with embossed text on each band beginning with the author’s name, a promotional tag, and the title. It’s black on orange and white on black.

The title is both Marlys’ plans and her target, an Extreme Prey.