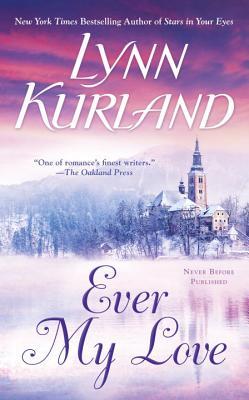 Buy on Amazon
Goodreads
Also by this author: Dreams of Lilacs, A Tapestry of Spells, Star of the Morning, The Mage’s Daughter, Princess of the Sword, Dreamspinner, River of Dreams, Dreamer's Daughter

Fourteenth in the MacLeod Family historical romance series and revolving around time-traveling Highlanders. The couple focus is on Emma Baxter and Nathaniel MacLeod.

This was fun and a definite departure from the usual storyline in the De Piaget/MacLeod series, and not only because Kurland is stretching out past the de Piagets and core MacLeods.

The story begins with an emotional hook with in media res and uses chunks of backstory to inform us how Emma got here. Which still didn’t make sense to me. I don’t get that whole deal about Emma’s boyfriend calling in that loan and how Emma ended up having to get rid of her business. The hook did make me keep on reading, if only to find out more about the ex.

Okay, yeah, there are flashbacks in this. Only, they’re Kurlandesque ones, lol, involving Nathaniel’s mother *more laughter*

Kurland makes use of third-person dual point-of-view from the perspectives of Emma and Nathaniel, so you do get insight into what both are thinking and feeling. Ehhh. It’s easy enough to follow, but it doesn’t ease over my niggles.

Such as, how, does Emma accept the time travel so easily? It doesn’t make sense. In fact, it took a good long while before I found out why Nathaniel kept going back…something of a maguffin in that. The push Nathaniel keeps making half-heartedly to get Emma outta town? Why it’s sooo important that Jamie, Patrick, and Ian don’t know about his excursions into the past? It’s sweet, yeah, but it’s too, too easy when Madelyn and Sunny show up with that offer for Emma.

Then we have the I’m-doing-this-for-his-own-good trope. Sigh.

Just about halfway through, Nathaniel says something that sounds as if he doesn’t know that Emma has been inadvertently popping back to 1387, which makes no sense, since he has rescued her at least a couple of times before this.

Some of the fun bits include how desperate Emma must be when even that inn doesn’t faze her. Those micro-loans Nathaniel loves to hand out. The mystery of that bit of Chekhov’s gun involving that dagger Emma and Nathaniel find in the museum. More plot beats appear in a wee touch of the villain speech, and the twisted-up ticking clock scenario that involves 1387, a flashing arrow that Kurland pops up in the most creative ways.

Yeah, I do love this series…and it’s on my list of to-buys, but I don’t think this one will be. It’s as if Kurland dashed this off to meet a deadline. She hasn’t put any real thought into this to make it feel real.

Caught up in an endless time loop, Nathaniel MacLeod has been forced to travel back and forth to the fourteenth century for the past five years, never knowing where or when he’ll wake up.

It’s a loop that suddenly pulls in that cute American who moved into the cottage down the way, and now Nathaniel has more to worry about than keeping his separate lives straight.

Emmaline “Emma” Baxter is fleeing a lousy relationship and the ruins of her jewelry business with but a six-months financial reserve. Sheldon Cook is a lawyer and the jerk of an ex-boyfriend. Bertie Wordsworth is a spy-turned-under-chauffeur (former MI6) who taught Emma quite a bit. Frank Baxter is her jerk of a father who’s a shark when it comes to investment dealings. Arnie and Jack are her brothers.

Nathaniel MacLeod is the local rich recluse who has fortune-hunting women swarming the local village. He went to law school but his undergrad is in Medieval Literature…comes in right handy, although he is part of a very exclusive investment group in London, MacLeod and Perkins. His mother had been Ceana Fergusson; his father, Archibald Poindexter MacLeod III, is an Anglophile and the grandson of extremely old New York money and the founder of a very successful venture capital group. Gavin and Sorcha are Nathaniel’s older brother and younger sister. Both prefer to leave the trust in Nathaniel’s hands. Ryan and Flora Fergusson were Ceana’s foster parents.

Peter diSalvio is Nathaniel’s shark of a lawyer; Suzie is his assistant. Tony diSalvio is his brother and another lawyer. Geoff Segrave is his London lawyer. Brian is an old friend. Alexander Smith is excellent at research.

Jamie MacLeod is the local laird. Zachary Smith (Till There Was You, 12) is his brother-in-law. Both get a mere mention. Patrick MacLeod, the lord of Benmore, is married to Madelyn, a very good lawyer, who is Sunshine’s sister (A Garden in the Rain, 8). Patrick runs a wilderness survival school. Hope is one of their children?? “Uncle” Bobby is one of the bodyguards. Ian MacLeod runs a swordplay school (Veils of Time: “And the Groom Wore Tulle”, 3). Sunshine Cameron, the Countess of Assynt, is married to Robert Cameron (With Every Breath, 11).

Bagley runs a fencing studio. Robert MacLeod is a ghost who plays the bagpipe when needed. The Glum is another ghostie who likes a pipe in front of the fire.

Adara McCreedy runs that one-star inn. Hamish Ferguson is the conscientious constable. Fiona MacLeod is the daughter of Keith MacLeod, the tavernkeeper.

Lord Stephen de Piaget is the lord of Artane (All For You, 14). He says that Rhys de Piaget was his great-grandfather (Another Chance to Dream, 1). Then he “teases” Nathaniel about knowing Rhys’ son Robin (If I Had You, 2), and his son Phillip.

Thomas Campbell is the caretaker for a weapons museum. Helen and Richard are part of a tour group.

1387, Scotland
Nathaniel is thought to be a bastard son. Uncle John fell into the past with him, and stayed as Master John, the local priest. After meeting Gerald, I can understand why he’s staying. Grudach is Malcolm’s daughter with whom John is in love.

Malcolm MacLeod is the local, fertile laird; Angus and Lachlan are his sons. Simon Fergusson is the Fergusson laird. Moraig MacLeod lived in a small house near Benmore.

The cover is a range of pinks from the deep purplish pink at the top with its rumblings of fuchsia clouds that quickly descend into the soft pastel pinks of the snowy landscape of a Highland castle set up on a hill just above a shimmering lake. The author’s name is in white at the top against those dark pinks with the title at the bottom in a script of deep purple.

The title is who Emma is for Nathaniel, Ever My Love.

2 responses to “Book Review: Ever My Love by Lynn Kurland”