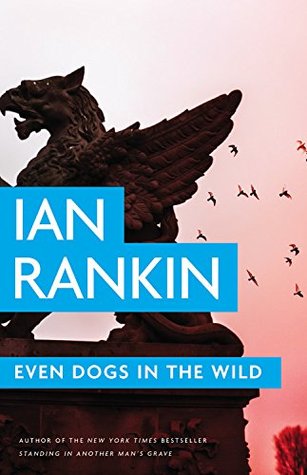 
Twentieth in the Inspector Rebus and fifth in the Malcolm Fox detective mystery series set in Edinburgh and revolving around the protagonists of both series: John Rebus, a retired detective, and Detective Malcolm Fox, formerly of Internal Affairs.

Fox and Rebus share the limelight in this. It’s an interesting combination of, I don’t know, motives? Rebus has retired and yet he keeps coming back, insinuating himself in everywhere. Thank god, lol! I do enjoy him and his stubbornness. They try keeping him out, and it’s totally useless effort on their part *more laughter*. Rebus also makes an excellent point about feet on the ground and a past knowledge and acquaintance with the bad guys.

Fox’s conflict in this is manifold. He wants to impress his dying father. He needs to be useful in his job. And yet he’s also wondering if he’s cut out for anything but Professional Standards. I’m curious if Rankin is using Even Dogs in the Wild to transition us over to Fox because he has Rebus advising Fox on how best to go about detecting, using his strengths.

It is funny how chummy Rebus and Fox are becoming, especially considering how intent Fox had been on finding any kind of dirt on Rebus. Big Ger is also mellowing out, and I’m not sure if Rankin is simply biding his time with him before bringing him back. I did enjoy the comparison Rebus makes between Big Ger and Darryl Christie: one’s a bully and t’other’s a negotiator. As for Joe, he’s definitely one of those parents who should never have been allowed children.

Rankin does a very nice job of inserting the info dumps naturally, and we learn a lot more about Big Ger’s climb to the top and his regrets, especially now that he’s getting old.

Phew, Rankin includes a few paragraphs on the different Advocates in Scotland. Man, they need more distinct titles. I can see where Siobhan gets confused! I did enjoy Rankin’s “soft launch” leak.

The story itself is full of interesting confusions among the mobsters with each thinking the other is plotting a takeover or war. It’s only the cops who know the truth, but even they are missing some facts. It’s all those red herrings and unconnected events.

Jesus, it’s a heartbreaking, traumatic story. And yet, it does end well in the end. Well, as well as it can end…

The stink of corruption.

Retirement doesn’t suit John Rebus. He wasn’t made for hobbies, holidays or home improvements. Being a cop is in his blood. So when Clarke asks for his help on a case, Rebus doesn’t need long to consider his options.

DI Siobhan Clarke’s been investigating the death of a senior lawyer whose body was found along with a threatening note. On the other side of Edinburgh, Big Ger Cafferty — Rebus’s long-time nemesis — has received an identical note and a bullet through his window.

Now it’s up to Clarke and Rebus to connect the dots and stop a killer.

Meanwhile, DI Malcolm Fox joins forces with a covert team from Glasgow who are tailing a notorious crime family. There’s something they want, and they’ll stop at nothing to get it.

Retired detective John Rebus who loves his drink, his smokes, and his music. And misses the job; he’s been retired a whole month now. Fortunately, he still has his favorite watering hole, the Oxford Bar. Samantha is his daughter, partnered to Keith, and they have a daughter, Carrie, who is almost two.

Detective Inspector Malcolm Fox used to be with Professional Standards (that’s Internal Affairs to the likes of us), and had tried his best to find the dirt on Rebus. Mitch is the dying father Fox can never impress. Jude is the sister with whom Fox is on the outs.

St. Leonard’s is…
…the police station where Fox is located. DCI Doug Maxtone is Fox’s boss.

Fettes is…
…police headquarters, a.k.a., the Big House, where Chief Superintendent Jack Scoular is in charge of Police Scotland.

Linlithgow is…
…the police station where Detective Sergeant Jim Grant is based. He’s working the Tolland case.

Ullapool is…
…a small town with a police post manned by PC Murdoch.

Gartcosh, an old steelworks, is…
…home to the Scottish Crime Campus with its primary mission organized crime and counterterrorism. It’s where Operation Junior originated with the belligerent and too-focused Ricky Compston. His team includes Jake Emerson, Beth Hastie, Peter Hughes, and Alec Bell. Bob Selway is the sixth member of the team and undercover.

Howden Hall is…
…home to the city’s forensics lab. Professor Deborah Quant is in charge. She’s also dating Rebus. Colin Blunt is one of the techs. Jordan Foyle is one of the mortuary attendants. Denise and Mark Foyle are his parents.

David, Lord Minton, has retired from his post as Lord Advocate, prosecuting some of Scotland’s most high-profile criminal trials. Jean Marischal had been his cleaning lady. Kathryn Young is the Crown Agent and Minton’s closest colleague. Shona MacBryer is the procurator fiscal attached to the Minton case. Howard Champ had been an MP and Minton’s friend.

Michael Tolland, a lottery winner, used to be in charge at Acorn House, a remand home for juvenile delinquents back in the mid-1980s. Ella was his unhappy wife.

Morris Gerald “Big Ger” Cafferty is a sort-of retired Mob boss who ran Edinburgh with whom Rebus has had a number of run-ins. Andrew Goodman runs a stable of nightclub bouncers.

Darryl Christie is the young mobster who’s looking to take yet more over. Chick Carpenter owns CC Self Storage and is one of Christie’s. Chrissie is Chick’s wife. Anthony Wright works for Chick. The Gimlet is a pub Christie supposedly sold to Davie Dunn who has two kids, Lottie and Euan.

Joe Stark and his son, Dennis (a mad dog himself), run Glasgow and are looking to expand. Walter Grieve and Len Parker are Joe’s trusted men. Cath is the wife Joe had adored. Dennis’ crew consists of Rob Simpson, Callum Andrews, Jackie Dyson, and Tommy Rae.

Hamish Wright has a haulage business, Hamish Wright Highland Haulage, in Inverness and hasn’t been too particular about the cargo. Mrs. Wright is running the business these days. Timothy is a driver who spills the beans.

Laura Smith is a crime reporter for the Scotsman and friendly with Siobhan. Albert Stout is a retired journalist — and cops are so grateful he’s retired from being a chief crime reporter. Patrick Spiers was a freelance journalist with a crusading zeal. Molly is Patrick’s grieving daughter.

Bryan Holroyd had been an inmate at Acorn House. Jim Broadfoot had been Chief Constable at the time. Todd Dalrymple used to own Milligan’s Casino back in the day. John B (named for John Bellany, the artist) is his dog. Paul Jeffries and Dave Ratner/Ritter used to work for Big Ger.

Mrs. Jenkins walks Godfrey, her yellow Lab, in The Hermitage. She knows the smell of gunpowder. Moira and Bernard run the Laburnum Guest House. Trevor and Zoe work at Meadowlea, the care home. The Gifford Inn is where Sandra, Denise, Jeff, and Ben work. Wee Anthony is a regular. Sanjeev Patel owns Newington Spice, an excellent curry restaurant. George Jones is working on his Capri. The homeless dog becomes Brillo

The cover is a contrast between the pastel of a pink-to-blue sky, the bright blue of the author’s and title’s background, and the deep brown-orange of the griffin statue that dominates the cover.

The title is a nod to Rebus’ love for music, and I suspect a metaphor for the past, for not Even Dogs in the Wild are as vicious as those in the city. 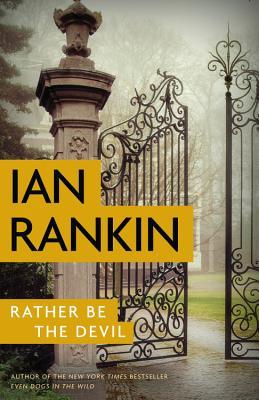 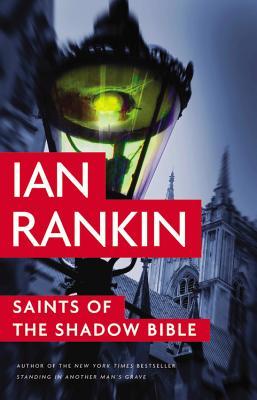