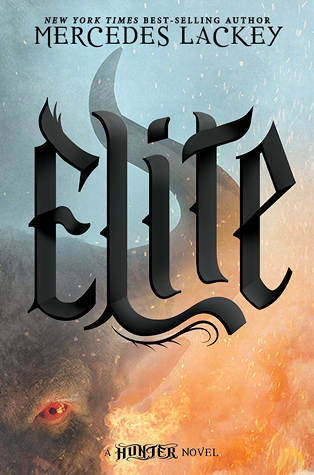 There’s plenty of action, a touch of romance, and tropes galore. I think Lackey pulled up a list of clichés and tropes and slipped ’em all in. Hence the low rating.

The most annoying trope was Joy moaning on and on about how she keeps screwing up. Ohhh, the guilt of it all… So stop, already! Naturally, Joy is the only one who gets the innovative ideas that help the Hunters, from the revelations about the Hounds to using Aki-Do moves in conjunction with her magic. Yep, that old hero-who-saves-the-day trope. Then there’s that blend of jealousy over a man being merely a friend with a woman combined with the female equality-slash-pigeonholing trope. The persecution trope with the Psimons ticked off as Joy keeps finding those dead bodies. Well, duh…

Naturally, they’re grooming Joy for a leadership role, which naturally, Joy hates for the attention it throws on her…oh, woe…again… Our poor modest Joy. Okay, I do actually like the concept of Joy’s character, but puh-lease, ease up on the tropes already!!

I did like Kent’s observation that reading about paintings doesn’t make him an artist, lol. I also liked the message in Elite, that you’re never stuck at one level, that you can always learn more. The sum-up that magic answers to belief can so easily be applied to other aspects of life.

Lackey also notes the difference between people raised at the Monastery and those in Apex City. How the Cits take safety for granted and wouldn’t do well without all the protection that surrounds them. There’s also the difference between the beliefs of one group that insist on pigeonholing half their people, to everyone‘s detriment.

There is an assortment of conflicts. The obvious one is the increasing intensity of Othersider attacks. They’re bad enough, but Ace is free and has crossed over to the enemy…and is focused on taking out Joy. Her uncle has set her a secret mission that brings her into conflict with a powerful group. Mark is desperate for her help, although Jessie has issues with this that are much too easily solved. And Josh is suffering his own conflicts.

Why would Joy think the enemy would be courteous and let her pass in a battle?

There is a quick reference to all the fan service that drove Joy mad in Hunter, 1.

Joy makes a rather terrifying observation at the end about Senior Psimon Drift…!

Psimon dead are appearing in the sewers under Apex Central, and Uncle Charmand assigns Elite Hunter Joy Charmand to patrol. A decision that will open her to PsiCorps scrutiny and the bad blood that exists between the prefect of police and PsiCorps. Worse, PsiCorps appears more interested in keeping Joy silent while not investigating these mysterious deaths.

But this dangerous powerplay between Uncle and PsiCorps pales against the Othersider attacks surging in and around Apex City, strikes that, in hindsight, have been carefully targeted to destroy Hunters, and one in particular.

The young Joyeaux Charmand is a Hunter whose pack has increased from her original seven Alberijes to eleven: Bya is the alpha, Dusana who is big enough for Joy to ride, Begtse, Chenresig, Shinje, Kalachakra, and Hevajra are the rest of the original pack. With Ace’s betrayal, his Hounds, Myrrdhin (who has become second-in-command) and Gwalchmai, ask to join with Joy’s as do Hold and Strike, the murdered Karly‘s Hounds.

…humans whose magic comes to them in the shape of a mandala on the back of their hands, a design burned into them when their Hounds arrive for the first time. After that, Hunters can summon the Hounds — magic beings living Other Side, Alberijes, able to change their shape — who answer to them alone. The Hounds form a pack with each pack having different abilities and shapes; one type of Hound ability is bamphing, a.k.a., teleportation. They feed on manna, magical energy, which is found in everything.

Hunters are divided into two levels: the Elite and the ranked. They answer to the prefect of police who is Joy’s uncle. Grace is one of Uncle’s secretaries. Josh Green, a Psimon, is her uncle’s personal Psi-aide and Joy’s boyfriend. Psimons are discouraged from forming friendly relationships with anyone. Rik Severn is in charge of Hunter personnel.

The Elite Hunters are…
…free of the media scrutiny paid to the ranked Hunters. Senior Elite Armorer Kent is the defacto leader. Hammer and Steel are brothers who form an effective partnership wielding their Walls; they have six Hounds. Archer is good with arrows. Retro is young, incredibly funny, and very interested in Joy. Scarlet is amazingly nice; her pack leader, Djinni, liked working with Joy’s pack. Flashfire‘s skill is his pyromancy. Hawk, Bull, Siren, and Mei are more of the sixteen Elites.

The ranked Hunters are…
…revered as vid stars with their popularity rising or falling according to how the citizens view them. They include Dazzle with her fabulous light show, Trev, Regi, Sara, Cielle had been Ace’s girlfriend, Tobor, Fox and Levy are the new guys, Shiloh, Tank, Trooper, Denali, Hudson, and, Souxie with her lightbending skill.

Mark “White Knight” is a Christer to whom the Hunters have warmed up and one of Joy’s best friends here; he has four Hounds who look like lions and can fly. He calls them his angels. Bya and the rest like Mark and refer to his Hounds as the Saints. Jessie is Knight’s fiancée back home. Back in Anston’s Well, she’d been helping Doc Bellow.

…on the East Coast, one of the few cities that has managed to resurrect itself. It is protected by two electrical Barriers. Premier Rayne is its leader. Bensonville and Zion are two cities that look to Apex City for protection.

PsiCorps is…
…another elite organization with more than their share of arrogance. They are referred to as Psimon and have mind powers such as the ability to alter your memories, telekinesis, mind-control, telepathy, psychokinesis, etc. Everyone fears them. Senior Psimon Abigail Drift is the chief officer and head of PsiCorps. And she really hates both Charmands.

The Army’s…
…Mages have the same arrogance as PsiCorps and look down on Hunters for relying upon their Hounds. Ace Sturgis was at the number one Hunter spot before his actions in Hunter. Now he’s a prisoner used by the Army. Paules had been his brother. Army Mages include Prender and Kindsley.

…in the Colorado mountains where Joy grew up and has its own dangerous secrets. The area the monks protect includes Safehaven and Anston’s Well as well as the monastery itself. Master Kedo Patli had been Joy’s mentor and is still a touchstone for her. Masters are some of the other monks with skills, including Lady Rhiannon, Ivor Thorson, Pepperberg worked with the birds, Begay, and Jeffries, the most senior Master and head of the monastery. Brother Vincent. Kei is Joy’s best friend there and is currently seeing Dutch in Silverspring. Sheila Yazzy. Some of the Hunters there had included Shadi Newsom and Yanaba Yellowhorse. Master Hon Li had sent the Thunderbirds fleeing back in the day. It’s where Mark Knight’s people fled for sanctuary in Hunter.

…supernatural beings who invade from the Other Side to kill and eat humans. There are two types of Folk Mage: civilized and feral.

Drakken are huge dragon-like monsters who are at the top of the Othersider predator lists. Gog and Magog are near unstoppable. Gazers are giant eyeballs who can burn out your mind if you get caught in their gaze. Jackals are the Gazers’ symbiotic helpers. Thunderbirds incorporate lightning and control storms. Wyverns, intelligent Minotaurs, Goblins, Trolls, Wendigos, Nightmares, Harpies, and Hags who are good with illusions, dour-armed Nagas with each arm wielding a sword, Recaps use bronze knives, Knockers use crude clubs and flint knives, Yeth-hounds are headless, the naked Kobold, and the newest ones who appear to be related to the Kobold — but wear clothes and use tools — are more monsters.

The Diseray is actually Dies Irae, a.k.a., the Wrath of God, a catastrophic event that turned the world upside down two-and-a-half some centuries ago when Portals opened all over the world, allowing Othersiders to invade, what people refer to as Breakthrough. Christers are Christians. Cits are ordinary citizens with no magic. Perscom are personal communicators; think of it as an Apple iWatch.

The cover is cheerfully demonish with its pastel blues and flaming oranges, sparks flying up while the top half of a demon-like head with a curved horn and red eyes glares out at us. The author’s name (at the top), the huge title (in the middle), and the series information (at the bottom) is all in an embossed black blackletter font.